Anyone who has ever picked up a guitar has experienced it: String buzzing. Why do my guitar strings buzz and what can be done about it?

In this article, we'll cover all of the potential reasons you could be dealing with strings buzzing. I'll also show you how to fix string buzzing, regardless of the type of guitar you're using.

Whether acoustic or electric, this article will cover what you need to know about fixing string buzzing and preventing it from recurring.

Here's a table of contents that shows what I'll cover.

Table of Contents (click to jump)
Why do my guitar strings buzz?
String Action is Too Low
Nut is worn down
Frets are uneven
Buzzing in Electric Guitars
Buzzing in Acoustic Guitars
How do you fix it?
Set up/adjust your guitar's bridge
Adjust your truss rod
Replace the nut
Conclusion

Why do my guitar strings buzz?

Let's answer the question first, so we can better understand the proposed solutions:

Why do guitar strings buzz? What causes it?

Most of the time, guitar strings won't buzz on their own, when played as an open string. But when you press them on certain frets, you might hear a buzzing because that pressing down is causing another part of the string to make contact with another fret or a fret separator.

The buzzing will likely also be followed by a muffling of the note that you originally intended to play.

It's that secondary, unintended contact that causes the buzzing.

String buzzing usually comes from secondary, unintended points of contact on the fretboard.

But what is behind the contact? Why do strings touch the frets or separators when we don't want them to?

There are three potential underlying causes.

String Action is Too Low

By far, the most common cause is that your string action is too low.

"Action" refers to the distance of the strings from the fretboard in their resting state, or how much space you can see between the frets and the strings.

Action refers to the space between the strings and the fretboard. If action is too low, this can cause buzzing.

Ideally, strings shouldn't be too far away from the fretboard because that makes the guitar difficult to play. Yet, setting the strings too close is likely to cause the unwanted buzzing we're trying to eliminate.

Nut is worn down

The nut is the piece of the guitar's neck that separates the fretboard from the headstock.

Location of the nut on an electric guitar

If this piece gets worn down, it can be an underlying cause of the action being too low, which will cause unwanted buzzing.

The least likely culprit is going to be uneven frets. This occurs when some frets rest higher on the fretboard than others, either because of frets being worn down or the guitar simply not being made well.

While this is fairly rare, it's also pretty hard to fix and usually requires re-fretting, replacing the neck, or replacing the guitar entirely.

Why do my guitar strings buzz in Electric Guitars

Buzzing is actually more common in electric guitars because the action tends to be set lower to allow for faster playing. It's especially problematic in cheaper electric guitars that aren't made well.

You might notice buzzing less when using distortion, though this is simply masking the problem and shouldn't be considered a viable solution.

Check your electric guitar for buzzing notes with a clean signal.

The good news about buzzing in electric guitars is that it's far easier to fix.

With minor adjustments to the bridge, electric guitars can usually be set up to play without any buzzing or note inconsistencies. We'll talk more about bridge adjustments later in this article.

Why do my guitar strings buzz in Acoustic Guitars

While acoustic guitars don't have fret buzzing as often, those that do, tend to be harder to fix because the bridge is more difficult to adjust.

In a lot of cases, we'd recommend starting with the nut to make sure there isn't a problem there. If your acoustic guitar doesn't have a truss rod (more on those later), it's going to be even trickier to remedy the buzzing.

If that's the cause, we might recommend taking it to a shop or have a professional guitar tech fix it by replacing or adjusting the bridge.

How do you fix it?

Now that we've covered the potential causes of buzzing frets, how do we fix it? There are three possible fixes that you can do on your own, without having to pay for professional help.

As you go through these, keep in mind the distinction between electric and acoustic guitars. Not all of these fixes are possible in both, depending on the type and state of the guitar in question.

In most cases, adjusting your guitar's bridge is going to solve the buzzing problem. However, the approach is different depending on the type of guitar and type of bridge you have.

If you have an electric guitar, simply use a hex wrench to adjust the height of the saddles holding each string. Make sure that they're all roughly the same height, allowing enough space between the strings and the fretboard.

It's easy to raise the action of an electric guitar by adjusting string height at the bridge.

Adjusting the bridge height of an acoustic guitar is a lot trickier and might require the help of a professional guitar tech. Remember, string buzzing means we likely need to raise the strings, which is harder to do without an adjustable bridge.

To make an acoustic guitar bridge higher, you actually need to replace the existing bridge.

If you want to do it yourself, you can try a replacement bridge, though I'd also recommend trying to replace the existing nut with a slightly higher one. If it's too high, you can sand down the new nut until you get to the desired height. Just make sure to test the new nut as you go. 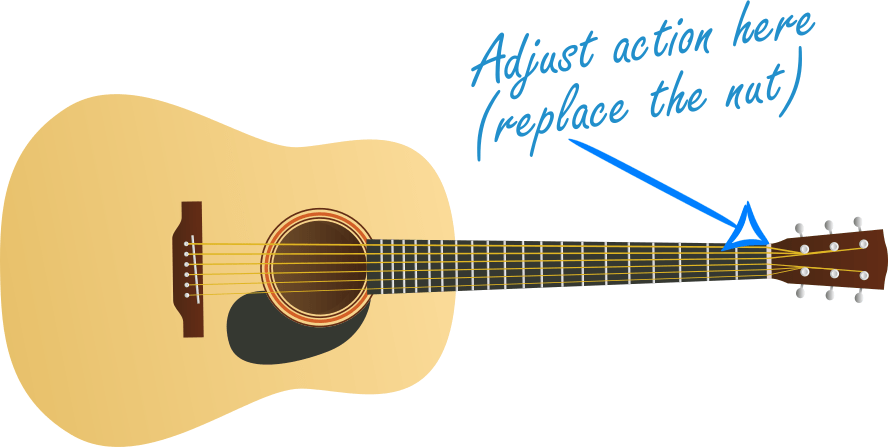 If you'd rather not attempt this yourself, it's another tactic that a professional guitar tech will be able to take care of for you.

Also keep in mind, some acoustic guitars do not have a truss rod. Refer to the above article for info on how to tell if your guitar has one or not.

For acoustic guitars, nut replacement is probably your second-best option

These are all the most common reasons and fixes for guitar string buzzing. If you have additional questions, or if you want to share your story of how you identified, fixed, or prevented buzzing in your guitar, drop a line in the comments section below.

I'd be particularly interested in hearing stories about how this worked out in an acoustic guitar context, since those are tougher to diagnose and treat.