Strymon continues to make digital signal processors appealing to analog purists. You'll have a hard time finding a better-sounding tremolo effect (analog or DSP), not to mention the reverb side of the pedal. Together, they make one of the best stompboxes on the market, overall.

Though a tremolo first, the Flint has a separate bypass for its reverb side, effectively giving you two pedals in one. Branching off from the two effects are three modes each, two controls for tremolo, three for reverb, and then a second layer of more advanced controls that can be engaged with the same knobs.

In short, you get two effects, each with three modes, and each with a multi-band EQ.

It's a lot of value from one stompbox.

For this review, I got my hands on the Strymon Flint and used it in my own living room with my own rig.

Here's how I graded:

There are some natural limitations that go along with a 2-in-1 effects pedal, which is why we have the versatility score a little lower. This goes in line with its EQ Comprehension grade which we have at 90, just because it is a little tricky to get used to using a secondary control scheme. But it's still applicable to a wide range of musical styles and situations, scoring solid numbers in every other category we measure.

In this table we've listed the Strymon Flint with several other comparable tremolo pedals for easy reference. Be aware that the orange buttons link to these pedals on Sweetwater, which we use to support our site - free of ads - and at no extra cost to you.

We simply ask you consider shopping through these buttons as a means to support our site. Thank you for reading and enjoying Guitar Chalk's content.

Create an alert and we'll let you know when the price drops.
Set price alert for Strymon Flint Tremolo and Reverb - $299.00

This is the video demo I made of the Strymon Flint. I don't get into the secondary controls, but I believe all the modes are covered.

This is the audio from the YouTube demo above, for those who prefer to just listen and avoid streaming the entire video.

You wouldn't think that tremolo could vary too significantly, but between the three modes you actually get a wide variety of flavors. This helps you get plenty of mileage from the speed and intensity controls.

The tremolo side sounds warm, especially the '63 tube mode, which we ran through both an actual tube amp and a digitally modeled Garageband algorithm.

In both, the tremolo effect sounded full and organic.

We actually found it hard to capture the quality of both sounds over a direct recording, because it just sounds really good in open air. While the reverb side is not as impressive as the tremolo side, the combination of both sounds exceptionally good.

You get a lot of warmth from the tremolo and ethereal, ambient trails from the reverb.

We'd argue that it's a tremolo pedal first and reverb second. 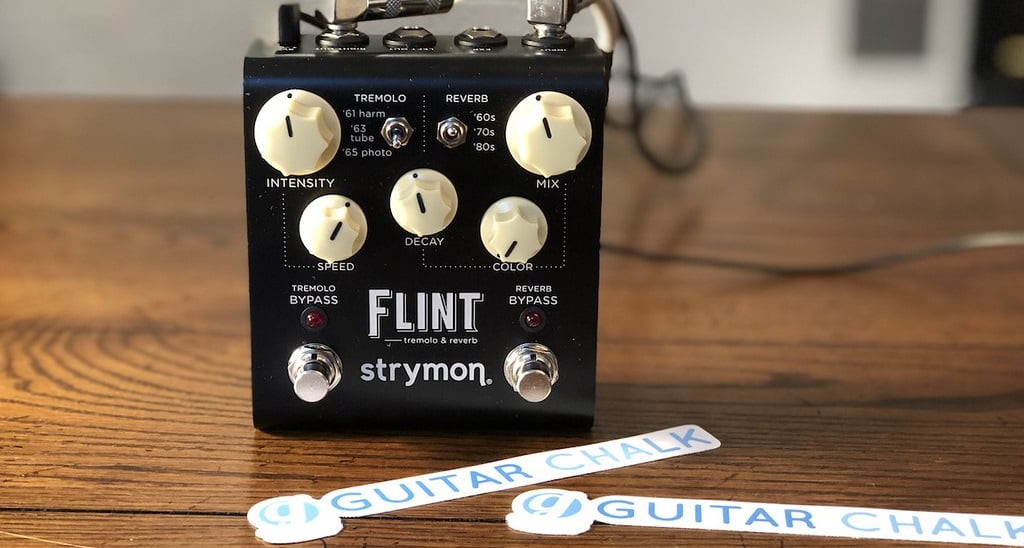 The Flint has a distinct warmth coming from the tremolo side.

Strymon is one of the few companies that I've seen consistently avoid using analog circuits, yet manage to produce pedals that sound this good. You won't notice anything lacking or feel like you're missing out because of the digital algorithm.

However Strymon does it, the Flint sounds great and competes with similar tremolo pedals that do use bucket brigade circuitry.

Control for the Strymon Flint is broken up between the two onboard effects: One set for tremolo and another for reverb.

Both have primary and secondary control schemes that can be accessed for either side of the pedal.

Notice there are three controls for the reverb side and two for the tremolo:

Control is broken up between the tremolo and the reverb side.

The modes are selected via two three-way switches for each side of the pedal. In terms of how much impact is had on the effect, tremolo sees a more dramatic change when modes are changed. Both the intensity and speed knob are less dramatic shifts.

On the tremolo side the Intensity knob either thickens or lightens the depth of the tremolo trough, while the speed knob doubles as a timing subdivision.

On the reverb side the Color knob changes the dark/bright balance of the ambient trail, though behaves a bit differently depending on which reverb mode you've selected. Decay controls the length of the trail, while mix changes the balance between the wet/dry signal.

Below, we've posted a screenshot from the Flint user manual that shows you all the secondary controls. 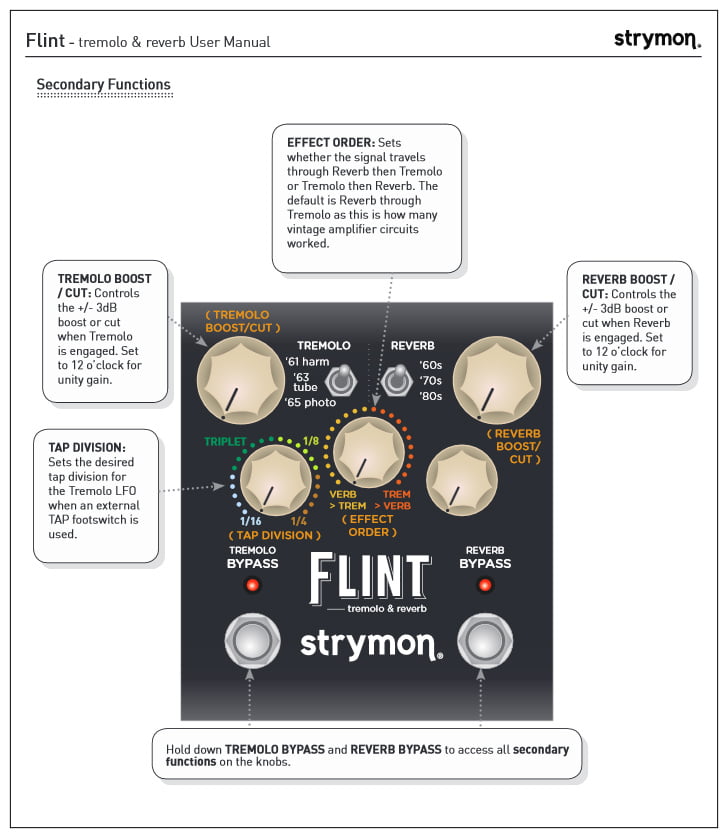 All of the secondary controls on the Strymon Flint. 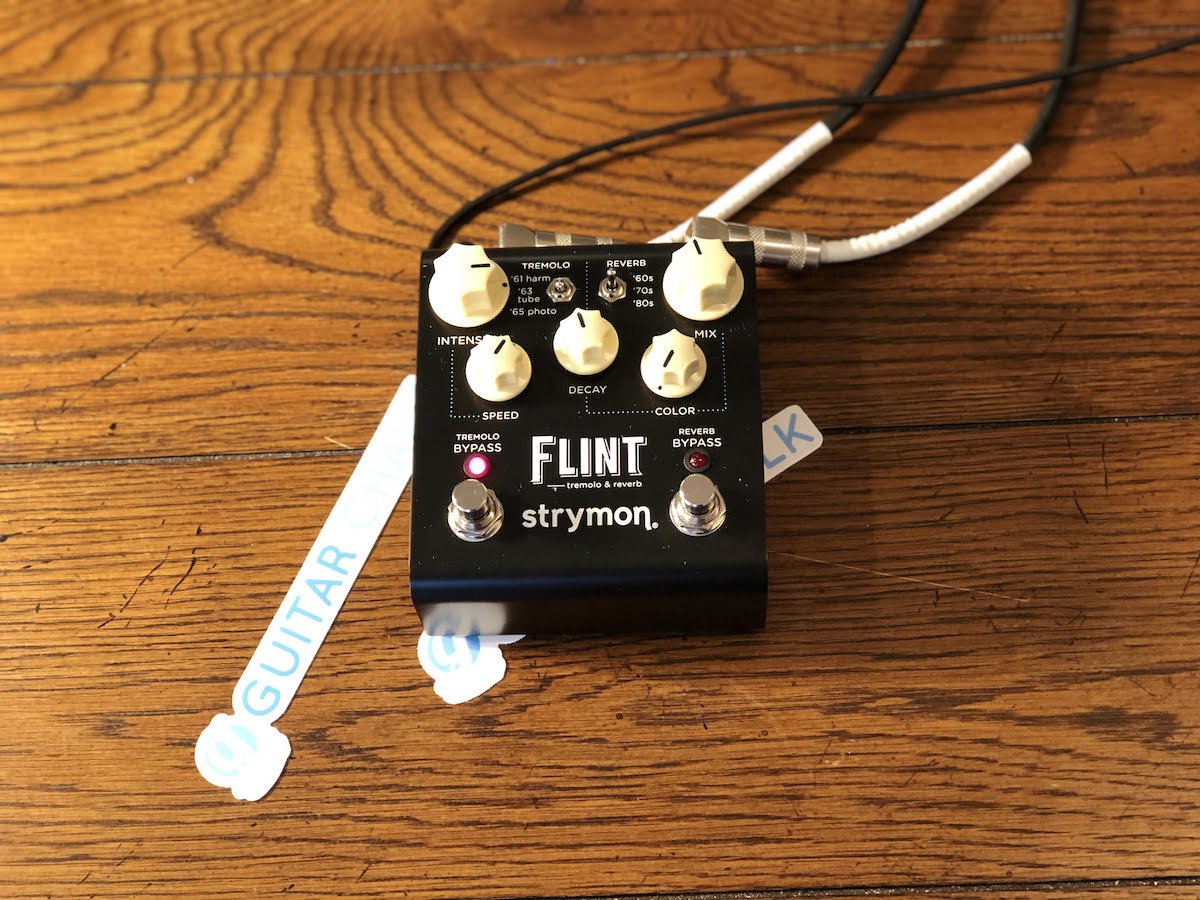 Testing the Strymon Flint with a couple of our stickers, just to prove we actually used it.

Cost and Value of the Flint

For those familiar with Strymon pedals, the sticker price won't surprise you.

Retailing at $300, the Flint is priced similar to other dual function Strymon boxes, and far less than the large (but still popular) BigSky, Timeline, and Mobius. Yet this is still a big ask for a tremolo pedal, especially when you have other options for nearly a third of the price.

You get what you pay for.

We've never seen a company produce effects that sound this good without heavy reliance on analog circuits. This leads us to say the price tag - if you can afford it - is absolutely worth the trouble.

I might limit my recommendation of the Flint to more professional rigs, or those who have played a long time and are familiar with how effects work in an electric guitar rig. We like it a lot for both rhythm and lead players, and would recommend it especially for session guitar players or those who do a lot of recording projects.

If you're confident you'll use the tremolo effect a lot, and you like the reverb combination, the $300 will be money well spent.

In this section, we'll cover a handful of frequently asked questions that we picked up on during our research:

Did Strymon release a second version (V2) of the Flint?

No. As of January 2021 (when we wrote this article), Strymon has only released one version of the Flint. What many could mistake as a second version is simply the ability to choose the color of your knobs. Recently, Strymon made them available in black as well as the cream color you see in most photos. 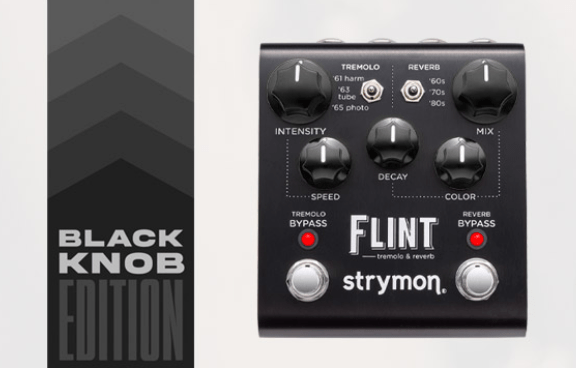 Strymon has released a black knob version of the Flint, though it's otherwise the exact same pedal.

Where can I find the Flint user manual?

The PDF version of the Strymon Flint user manual is available for download directly from Strymon's website.

How much does the Flint cost used?

Per reverb.com, the Strymon Flint hovers around the $260 price range for used options. You can check for updated used pricing charts here.

That concludes our Strymon Flint review.

Do you have questions about the Flint or our review process?

If so, drop them in the comments section below so I can jump in and help out. That's the easiest place for me to answer questions (much easier than email), plus it also helps keep the conversation going and can be helpful to future readers.