With a well thought-out control scheme and an intriguing blend of octaves and reverb trails, the Walrus Audio Descent is one of the most unique and satisfying reverb pedals we've ever tested, giving you a ton of mileage out of just three reverb modes.

The Walrus Audio Descent avoids relying on a bunch of reverb modes and algorithms to give you a versatile effect profile. Instead, it combines some basic reverb control and octaver functionality with three reverb modes and three mix controls. Together, these give you one of the most unique-sounding and addictive reverb pedals on the market, without just throwing a bunch of different sound titles at you.

This allows you to build reverb trails that are particularly ethereal and "otherworldly," sounding dramatically different than reverb you might get from an amplifier or a cheaper reverb pedal.

It almost sounds more like an organ or some kind of keyboard "strings" setting, especially with higher octaves set.

We found a handful of negative reviews complaining about the intensity of this reverb, though we'd argue that those reviewers didn't do enough tinkering to justify the complaint, since you have mix knobs for both the dry and wet signals, which together give you precise control over the balance and intensity of your reverb trails. You can even adjust how much of your wet mix gets impacted by the three reverb controls (more on that later).

Moreover, I liked the intensity of the Descent and found myself continually keeping the Wet Mix control turned high.

Reverb trails in this pedal have a way of engulfing the signal, but with the Dry Mix control you can still easily hear notes that you're playing.

If you want just the trail, turn the Dry Mix knob all the way down.

In this report, I'll get into all the details and my experience with the pedal. First, here's how I rated the unit:

Sweetwater is our go-to for gear and our closest partner.

This means that the orange buttons below have links that help support our site, but that cost nothing additional to you. We try to buy everything we analyze, so it's extremely helpful to us if you do your gear shopping through these links.

Thanks in advance for your support.

Pricing from Other Vendors

The demo video I filmed is a little less than 10 minutes with no talking, and simply covers most of the Descent's settings.

We've also photographed the Descent, though with perhaps a darker back-drop than we would have liked. If nothing else, this shows you that we actually bought the pedal and used it for testing/inspection purposes.

In this section we provide some quick stats about the Walrus Audio Descent along with some ratings, pros/cons, and a review aggregator, all before getting into our own specific experience with the pedal.

IDEAL FOR: Electric guitar players who play a lot of melodic, clean lines.

Of 59 total reviews, 7 were negative and 52 were positive.

88% positive
Table of Contents (click to jump)
Similar Reverb Pedals
Demo Video
Descent Reverb Images
The Quick Hits Section
Effect Tone and Sound Quality (reverb and octaver)
The Descent's Control Scheme: Reverb-Specific
Cost and Value
Where does it have the most value?

The box itself - as I've already alluded to - is primarily a reverb pedal but with two effects:

Within the reverb effect, you have three different algorithms or
"modes" to choose from:

While this algorithm selection is small compared to other reverb pedals (some can have upwards of 10) it's the variance of control with each algorithm and the octaver combination that provides most of the versatility. On their own, the reverb algorithms sound good, but aren't nearly as unique outside of the high-functioning control scheme.

Keep in mind, it's a digital pedal with a signal processor, not an analog circuit, like you might think from looking at the cover.

Still, for a digital chip, it sounds incredibly good, and gives you a ton of creative room to work.

The reverb trails definitely have a shining quality and seem to space out a lot as they trail off. You'll hear what sounds like a chorus of trails at different harmonized pitches and octaves, which can of course be changed by the "+1 and -1" controls.

You'll hear the swelling of the trail move in tandem with your playing and even responds to the intensity of your picking. With the dry mix up, you'll hear a layer of ambience that just kind of "sings" behind whatever you're playing, almost like a chorus of background vocalists.

Dialing back the wet mix is an easy way to bring down the subtlety.

On lower percussive notes the trails sound thick and full, though they don't really follow strumming patterns and instead rest over top of your playing as an ambient layer.

As mentioned, the octaver can be adjusted using the +1 and -1 knobs, which will set the trail either one octave up or down from the dry note. This is the case for all three reverb modes.

We found that the higher octaves sound particularly good and are more noticeable, even when you're playing single notes.

On chords, it almost sounds too heavy without turning the wet mix down.

There's enough control on the Descent to keep you from being forced to accept heavy levels of effect saturation. But, in my opinion, even the heavy settings are usable and sound particularly good. The added octave effect is what makes it seem so thick, which is a nice compliment to the already deep reverb trails.

It's a lot, but it doesn't sound bad.

If you feel like it's too much, just set the octave controls to zero and you'll be able to tweak the wet and dry mix knobs to get a really subtle reverb layer.

This gives it application in a wide range of scenarios, though it's most at home over a clean signal playing a subtle melody line. Since reverb is so widely used, the Descent isn't really limited by style or a particular type of music.

We might avoid the Descent if you don't find yourself using a lot of reverb already, or if you exclusively play using distortion.

It's expensive for someone who isn't already using a lot of ambience (more on price later).

But for most players, particularly those who work with a lot of clean tones, the Descent will have a ton of application. 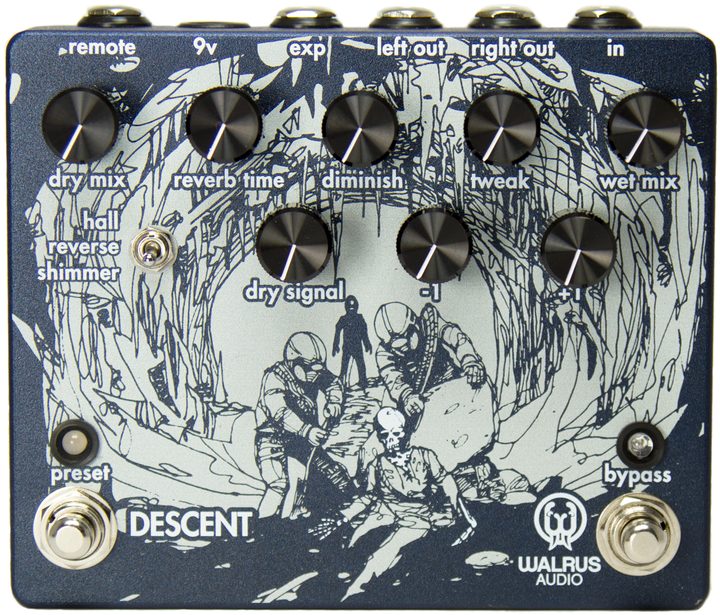 The professional-grade control scheme on the Descent's front panel.

The control scheme on the Descent is one of the more unique we've used in a reverb pedal. Reverb time works as expected, controlling the amount of time a signal is sample for the ambient trail.

Diminish controls the type of wall your reverb is hitting, either a flat or more complex wall. Another term for this is reverb diffusion.

On it's own, the diffusion control makes this one of the more unique reverb pedals on the market. Most reverbs we've tested do not have a comparable mechanism.

The tweak knob allows you to control damping, functioning as a type of hi-pass filter, and we've already covered the +1 and -1 knobs.

While there's a learning curve to the control system (I had to read up on diffusion and dampening) Walrus Audio gives you a lot of flexibility from just the diminish and tweak knobs, even before you get into the wet/dry mixing and octave controls.

Walrus Audio goes the extra mile to make sure their control is reverb-specific.

The other three knobs mix you see make up what is essentially a mini mixing board for the pedal. It's a bit confusing at first, so here's what each one does:

Each reverb mode behaves a little differently from a control perspective. For example, in "Shimmer" mode, the diminish knob controls feedback and the tweak knobs takes over diffusion. Again, there's a learning curve, but it does significantly increase the amount of flexibility you have when switching between the three reverb modes. Here's how the control breaks down for each one:

While the controls are definitely on the complex side, and take some time to get used to, Walrus Audio gives you a lot of functionality without a ton of knobs to fool with. We'd recommend taking a look at the user manual to get more familiar with the scheme.

At roughly $300 new, the Descent is not what we'd call cheap. Walrus Audio is still considered a boutique pedal builder, though they've certainly become more mainstream over the past few years, finding themselves in most major gear retailers.

Here you can see the Descent's Sweetwater listing at $299: 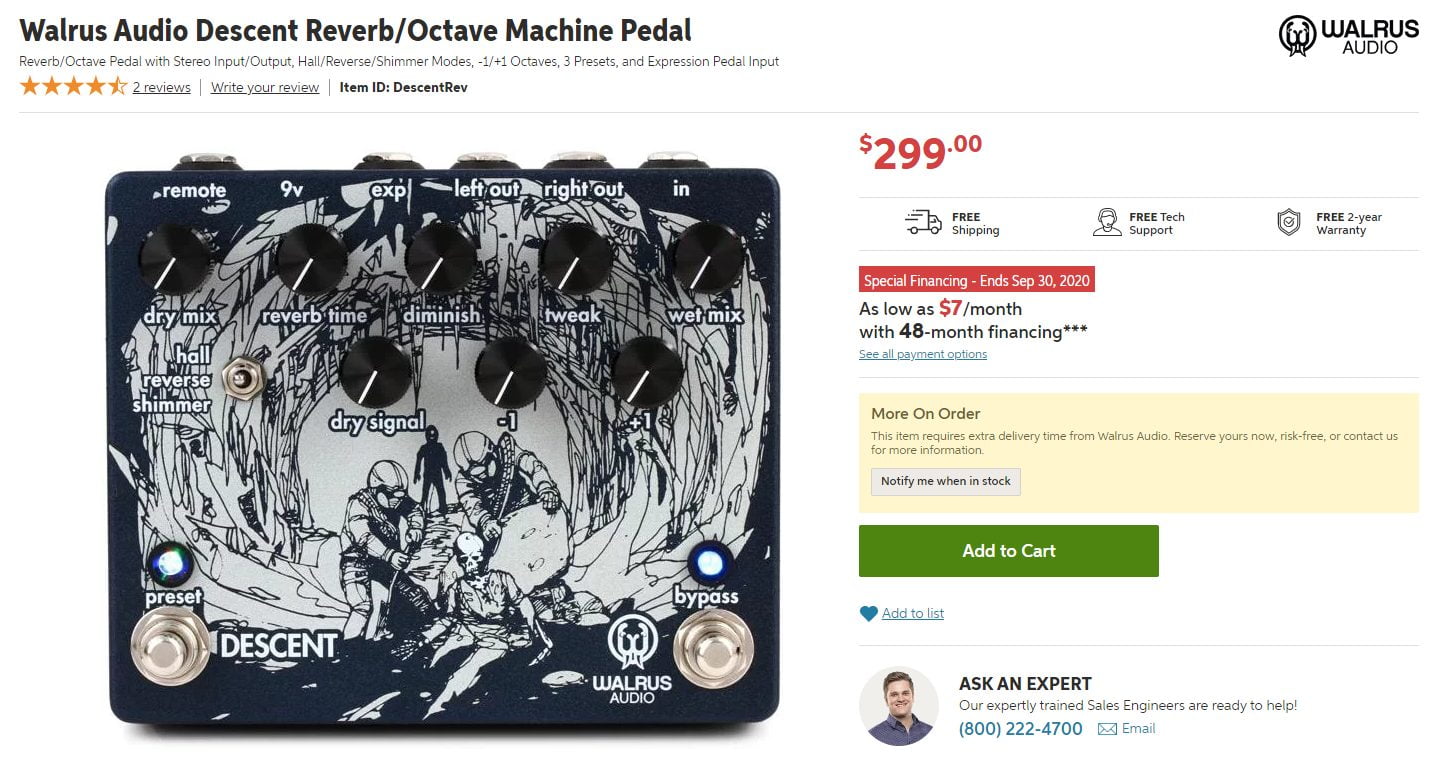 The most common price point for the Walrus Audio is about $300.

In used markets like Reverb.com, the Descent typically sees a significant price drop, where it's not uncommon to find one for less than $200.

Here's the pricing history from the Descent's Reverb entry:

Is the Descent too expensive in light of the lack of modes and no analog elements?

We'd argue that the unique control scheme, the built-in single preset, and the high standard of sound quality give you enough value to warrant the $300 price tag, and certainly the used pricing if you choose to go that route.

It's also not outside the norm of your typical boutique guitar pedal company. Most of these builders charge $200 for a single stomp, small-form pedal, and anywhere from $300 to $500 for the larger multi-function stomp boxes.

Strymon, Empress Effects, Wampler, and Walrus Audio are all in a similar pricing structure.

Is a Digital Circuit Okay?

Strymon and Walrus Audio are two pedal companies that are making DSPs sound really good. While we'd normally like to see a lower price tag for non-analog effects, the end result of the Descent isn't worth complaining about solely based on the fact that it isn't analog.

That's being way too picky.

To be honest, if I didn't know the pedal was digital (though it's easy to tell since it has so much control), I wouldn't have cared or been able to tell one way or the other.

Where does it have the most value?

To conclude, who would benefit most from the Walrus Audio Descent's services?

We'd say an electric guitar player who plays a lot of lead melody lines, but also finds his or herself regularly using a clean tone, as opposed to distortion. It's also a great option if your amp doesn't have reverb or if you just want a much higher-functioning reverb effect.

Anyone in that camp, who doesn't mind the price tag, will get a lot of mileage out of the Descent.

Do you have questions about our Walrus Audio Descent audit or our reviewing process?

If so, feel free to leave them in the comments section below.

I'll jump in and do my best to help out. See you then.

4 Awesome Delays that Include a Reverse Mode

4 Awesome Delays that Include a Reverse Mode