What Kind of Guitar Does Tool's Adam Jones Play?

If Adam Jones plays anything but a Gibson Les Paul Custom, I've literally never seen it. While I can't speak for recording sessions, his live performances are consistently marked by the Les Paul Custom, even when he changes tunings from drop D (which isn't very often).

Here's some of the submissions on Equipboard: Adam Jones' guitars listed (user submitted)

I can't totally verify what we see on Equipboard, but a couple other modals that I've heard before include: 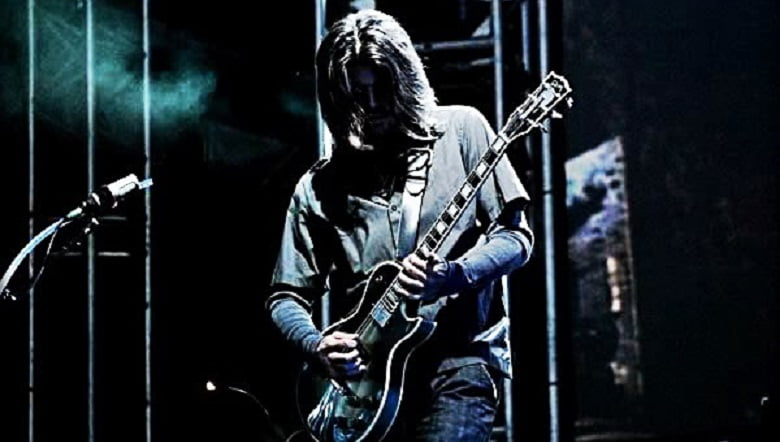 You won't see any Epiphones, Strats, or even anything outside the Gibson brand. The Les Paul is the foundation of the tone he has developed over several decades.

Outside of vintage and literal customized models, the Les Paul Custom line is one of the most expensive that Gibson regularly produces. It's easy to spot with the unique headstock inlays, nuanced body carving, and more pronounced finish on the body.

Jones usually plays the silver burst version, pictured below. But he's also seen with a black one fairly often.

This guitar is pretty expensive, even compared to other Gibson electrics. As mentioned, the Custom series is one of the top-tier Les Paul lines that are released by Gibson on a regular basis. Here are some live-updating prices from Sweetwater:

We work with partners like Sweetwater to support Guitar Chalk and stay ad free (ads are the absolute worst). If you decide to buy some gear, consider doing so through our links. We may get a commission at no extra cost to you. Win, win, win as Mr. Scott would say.

What about cheaper alternatives?

If you don't want to pay for a Gibson Les Paul Custom, there are three alternatives I would recommend:

It's hard to abandon Gibson when you're trying to emulate the Jones sound. You can certainly get close, but his guitar playing has been synonymous with Gibson guitars for his entire career.

Considering that, the absolute best alternative to the Custom would be the Les Paul Studio, which is usually around one-third the price of the Custom version. It's one of the best overall electric guitar deals on the market. Here's some current pricing, which again is updated in real time.

Props to Adam for sticking with the same guitar his entire career.

I always get kind of bummed out when a guitar player I follow changes his instrument, because it just kind of throws me off. The sound that Jones has established with Tool will always be rooted in the Gibson tone, so it's a good relationship to bet on.

If you have questions about Jones or his guitars, leave it in the comments section below and we'll talk. I'm always happy to chat about anything Tool related.

Written by GC Editorial on Rigs and Diagrams