Added the PRS Wind Through the Trees and the Dreadbox Komorebi flangers. Komorebi was an an anonymous comments submission. We appreciate the help.

Currently the MXR Micro Flanger retails at $99.99 , making it one of the cheaper flanger pedals on this list. It also has a solid, tone with simple controls that are easy to dial in. It's a good conventional pick for a list like this one. For what it's worth, the Walrus Audio Polychrome would be our second choice.

Flanger pedals often take a back seat to other modulation effects like chorus and even tremolo pedals. As a result, there just aren't as many flangers on the market. Even more rare are analog flanger pedals, which is what this list is going to focus on and highlight.

We're curating the handful of analog flanger pedals, including past and present options from a variety of brands.

Keep in mind, this is a simple "master list" and not a ranking.

My old and beat up Boss BF-3 flanger pedal (since sold). Not analog, but still a great flanger.

We find that our community likes these lists for simple browsing, regardless of specific recommendations or rankings. We address a few more FAQ-related content below the table, so read on or check the comments section if you have additional questions.

Otherwise, enjoy the list and make suggestions in the comments if you know of an analog flanger pedal that should be included.

If you want to help us out, the best way is to shop through our links on one of our partner sites, usually Sweetwater Sound. This costs you nothing extra, while giving you a simple way to browse and/or buy guitar gear. If you buy through our links, we might earn a commission and be happy. 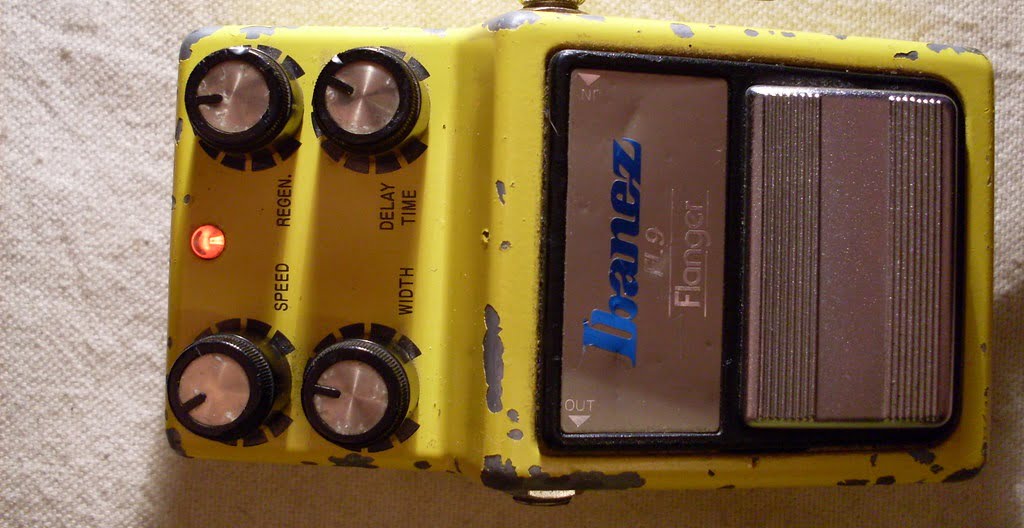 What about Donner and Behringer flanger pedals?

You might notice some dirt-cheap flanger pedals that market themselves as analog, yet are $30 or sometimes lower. Generally it is not possible for manufacturers to build a pedal that cheap with a real analog circuit. We'd be skeptical of any pedal in this price range that claims analog internals. Therefor we've elected to leave them off this list.

The sound of a flanger - analog or digital - is a swirling and swooshing sound, that almost sounds like a plane flying about your head. In this Boss BF-3 settings demo/article, I explored a ton of different flanger sounds. Despite the pedal being digital, this will give you good idea of what flangers sound like.

Here's a great video demo from Bonedo to give you a sense of what the analog version sounds like (the Walrus Audio Polychrome) and how it compares:

How is it different from a chorus or phaser?

In a lot of ways, a flanger is not that different from a phaser. A chorus - on the other hand - is generally a series of layered wet signals that are slightly off pitch. These create the chorus tone which doesn't really "swirl" like the phaser and flanger does.

With the phaser comparison, phaser swirling is often shorter, and sounds more pulsating than a flanger would.

There's also the technical difference, in that phasers use all-pass filters to create peaks and troughs, while flangers use a time-delayed filter to create a harmonic line of peaks and notches.

But keep in mind, all three of these pedals - flangers, choruses, and phasers - are members of the same effect category: Modulation.

There are always naturally-occurring similarities between pedals of the same effect category.

Analog pedals in general run up costs because their circuits are hard to build in bulk. Digital signal processors (DSPs) which house algorithms, are much easier to replicate on a larger scale.

If you want to buy new, Sweetwater is usually your best option. We don't typically see them offer discounts, but they don't run up the price either. Used markets we recommend are Reverb and eBay, though Reverb typically has better deals since they specialize in guitar and musical instruments.

If you want a more natural-sounding tone, an analog flanger is probably a better place to invest. For those wanting to focus on flexibility and control, we'd go with one of the digital options. There aren't a ton of flangers on the market, but the breakdown between digital and analog options seems to be about 50-50.

For questions about flangers, analog pedals, and effects in general, jump in the comments section below.

We also appreciate corrections and typos reported there as well.

Difference Between Phaser and Flanger Pedals

Written by GC Editorial on Pedals and Info

Difference Between Phaser and Flanger Pedals