QUICK HIT: Roundup of the four top Mesa Boogie amps from one of the world's most sought-after boutique amp manufacturers.

Mesa Boogie is one of the most sought-after amp manufacturers of our time, trusted by a massive list of professional guitar players, particularly in the hard rock and metal genres. Their artist list page is one of the largest such we've ever seen and includes the likes of Mark Tremonti, Dave Grohl, Adam Jones, Korn, Maroon 5, and tons more.

Those guys have their pick when it comes to Mesa amplifiers, but in this article we're going to seek out some of the more affordable options.

The Mesa Boogie amps we recommend will not only meet a certainly quality standard (essentially all Mesa amps do), but should also be decently affordable for you and me.

For the record, here's a quick look at my Mesa Recto-Verb combo: 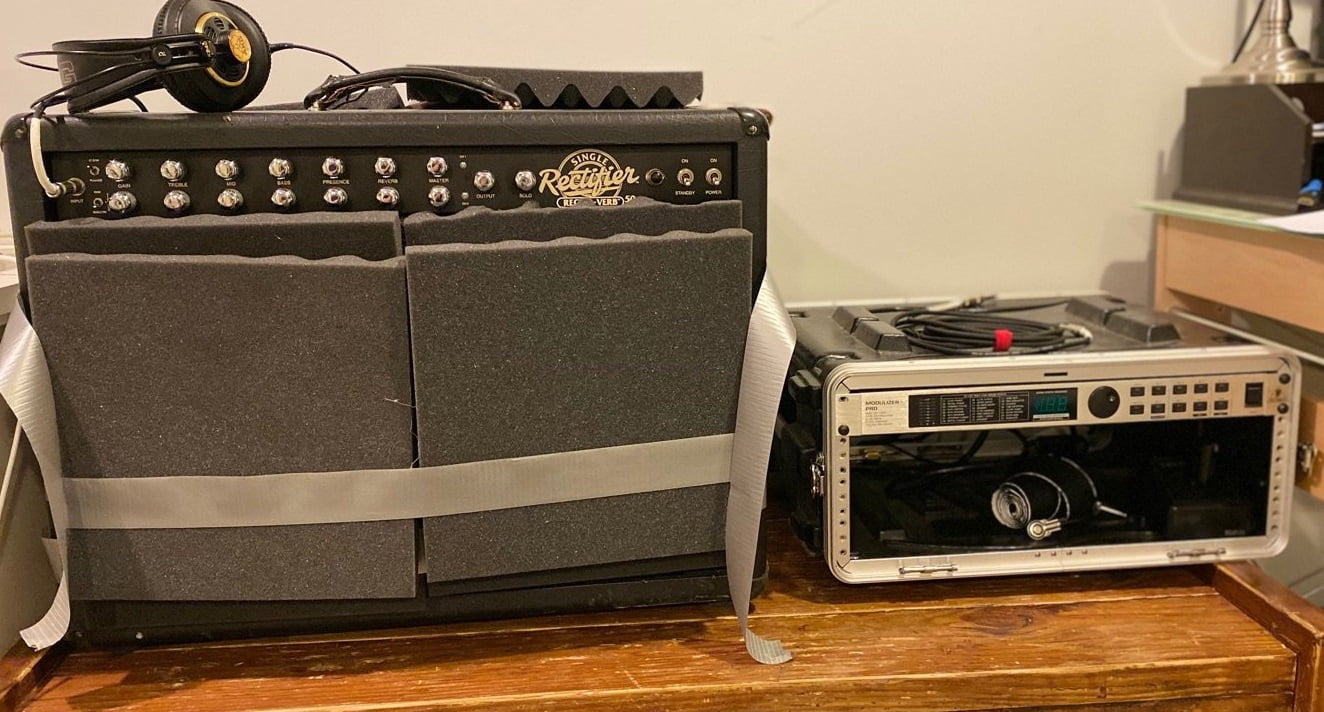 My own Mesa Boogie combo, the Recto-verb single rectifier.

In general, we advise sticking to single or dual rectifier Mesa Boogie amps to help keep the price down. We'll also look at one of the Mark Five models, as pictured below.

As we mentioned in our Diezel amp roundup, these amplifiers are all distinctly modern and aggressive in their tone profile. While they can fit any style, we recommend them particularly for heavy rock and metal. 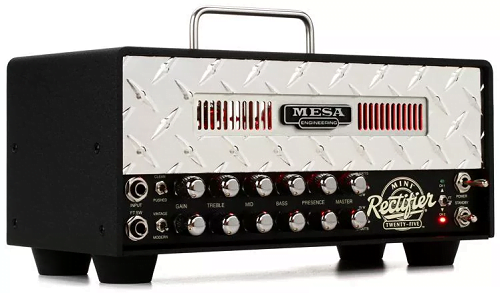 Since the Mini Rectifier is so much cheaper than the rest of the Mesa series, it's our top recommendation based primarily on the resulting value. For around $1200 (new) you can get the core benefits of the Dual and Triple Rectifiers without the added expense.

You'll have two channels to work with and the same tube-powered distortion technology that we see in the Dual Rectifier.

In other words, it sounds like you'd expect from a Mesa preamp.

While we like it especially for hard rock, it can handle a wide range of music and playing styles.

Three channels and five preamp tubes give you an immediate (and significant) upgrade over the Mini Rectifier.

The Dual Rectifier also offers a lot more flexibility on the backend, with more speaker outputs, external switching, more control over your effects loop, and more control at the footswitch level.

While both Rectifiers can handle a professional gigging or recording environment, the Dual Rectifier is more firmly seated at the "big kids table."

Some of what's included with the dual rectifier. 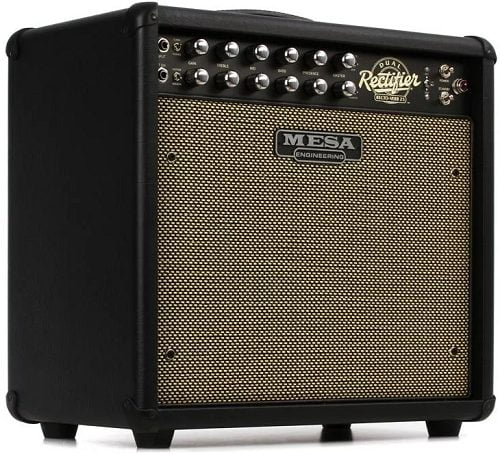 My Recto-Verb is older than the 25 series, though both are fairly similar in build and functionality.

One major distinction that might compel certain buyers would be the combo option the Recto Verb provides, which the Rectifier series doesn't typically offer. This saves you from having to buy a speaker cab. The trade off less control on the backend of the amp, though you still get an effects loop and two channels to work with.

We'd recommend it for those that want a simple, modern amp that can also hang on the more vintage, bluesy playing styles.

IDEAL FOR: Those looking for a combo, reverb, or a more balanced tone profile

There are a few different versions of the Mark Five, broken up by wattage. However, lower-wattage options have less features and less control, which I'd argue is the biggest strength of the Mark Five series. The sweet spot seems to be the 90-watt head, which gives you a ton of control and tone flexibility.

You get three independent channels, seven preamp tubes, voicings for each channel, a graphic EQ, and an 8-button footswitch to help control it all.

It's a fantastic option for session recording, gigging, or anyone that likes having more tweaking available to them.

For those interested, there's also a combo series of the Mark Five, commonly produced in the 35 and 90 watt versions. 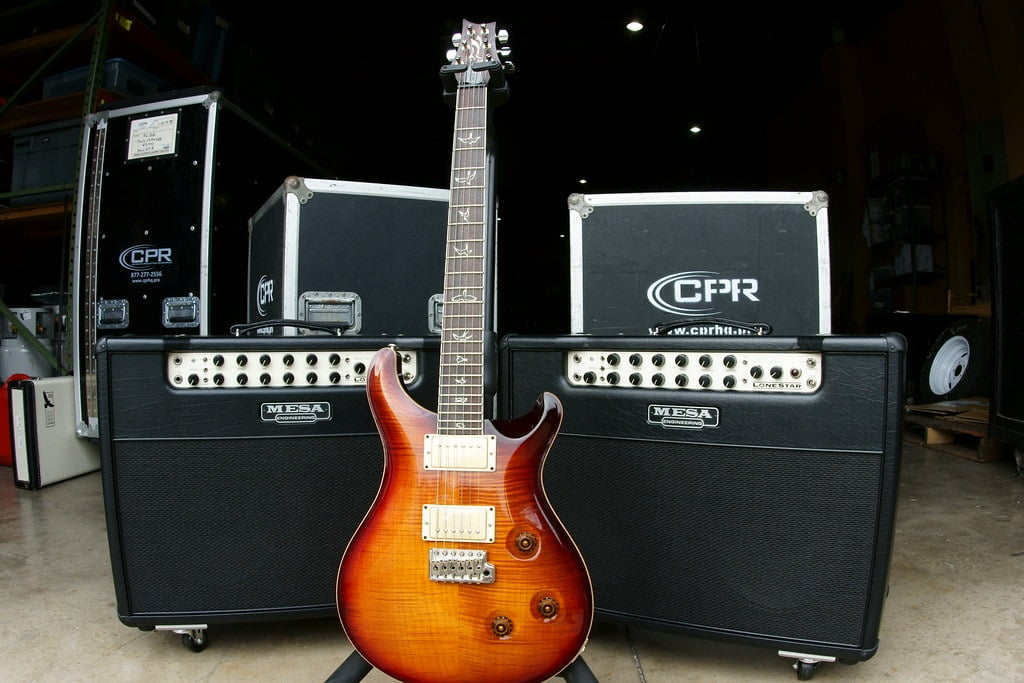 In summary, our top four picks include two Rectifiers, the Recto-Verb series, and the Mark Five series.

While we've given fairly specific recommendations, keep in mind that each amp is part of a series. That means if you find a Mark Five in a different wattage variation than what we've mentioned, it's still going to get you most of the core value we've outlined for the Mark Five 90.

In other words: It might have less control and/or less wattage - but still quite good.

For example, the Recto-Verb listed is a "Dual Rectifier" while mine is only a "Single Rectifier."

I didn't let that scare me away from what I already knew was a great amp series.

Just keep that in mind as you shop Mesa amps.

For those wanting a modern-sounding tube amp that's on the cheaper side, I usually recommend Blackstar as a good consolation price. If you can't afford the steeper cost of the Mesa brand, Blackstar is a similar style amp that can get you in the door for less than $1000.

Is that too much?

In my experience, you absolutely get what you pay for and the quality of an amp can make a huge different in your rig.

Where you draw the dollar line is up to you.

Conclusion and Your Questions

Of all the Mesa amps, I'd say the Dual and Triple Rectifiers are my two pure favorites (regardless of cost). The Recto-Verb I use was something my wife found and got a great deal on, saving me from a far more expensive event.

All that to say, just about anything with the Mesa logo on it is going to be a good option for you.

If you can't justify the retail prices, look around the used markets.

Reverb has a ton of used Mesas that will often drop under $1000.

In the mean time, if you have questions about the Mesa Boogie amps we've listed, feel free to leave them in the comments section below, or checkout some of our additional amp buying resources.