Checked all links for availability and accuracy.

Diezel amplification is a boutique amp company based in Germany, staffed by just four people.

Yet, their incredibly detailed, modern take on high-wattage tube-powered guitar amps has led them into a ton of pro rigs, including Tool, Korn, Staind, Slipknot, and a laundry list of others.

The menacing Diezel logo on the front of the VH2.

For a long time, the only amp from Diezel you would see on the market was the VH4, though they've since bolstered their inventory to include seven other models, providing the common man with a wider range of pricing to choose from.

In this article, we're going to highlight four of the finest Diezel amps.

These amps are all distinctly modern and most ideal for heavier, distorted playing styles. If you're looking for vintage or cheap guitar amp options, this probably isn't the most ideal list for you.

We'll start with the VH2, which is essentially a stripped down and more affordable version of the popular VH4.

The appeal of the VH2 is in the price tag, getting you what is essentially a significantly discounted version of the VH4.

Diezel labels the VH2 as a VH4 without all the bells and whistles, so you lose a few things like the MIDI ports, which might not even matter to you. If you just want the tone, we like the price of the VH2 and would consider it the best Diezel amp overall, especially from a cost and value perspective. 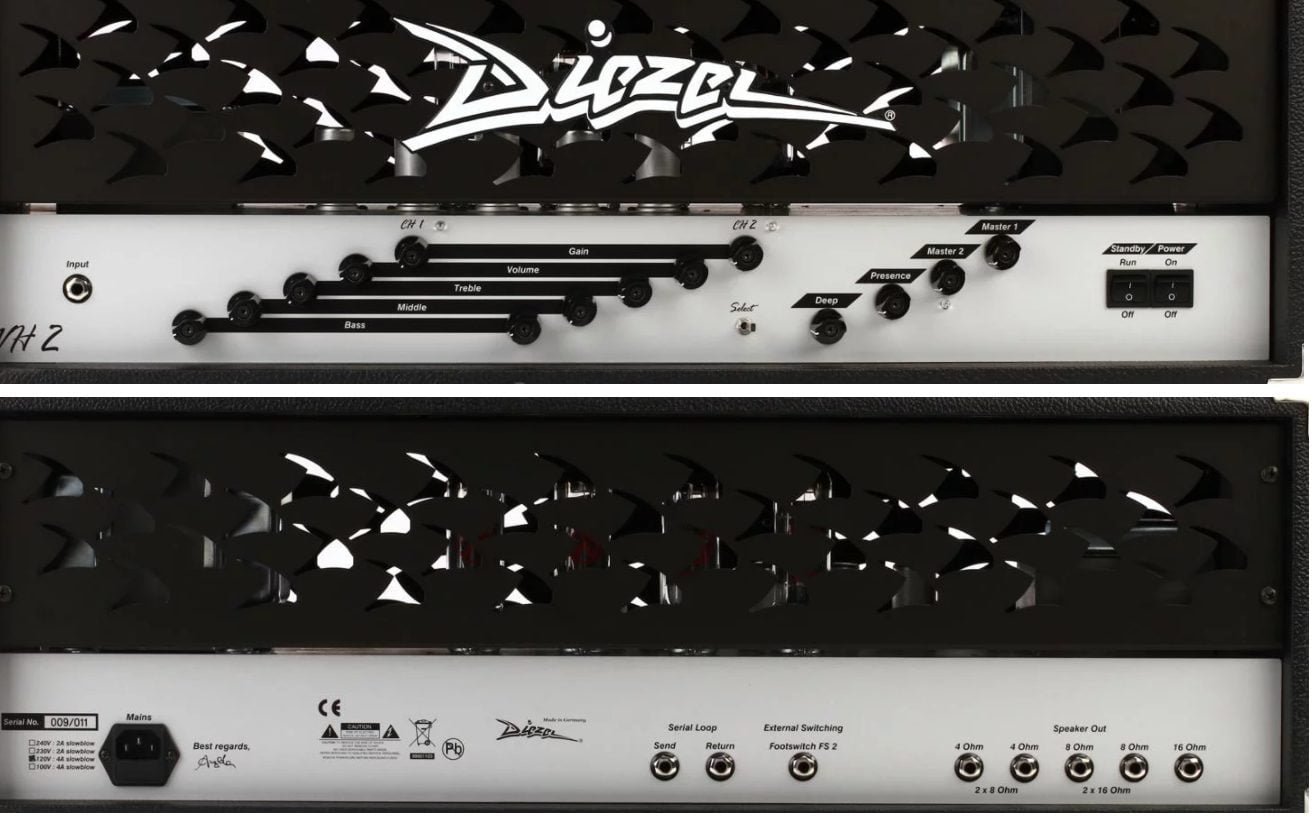 Front and back panels of the Diezel VH2 amp head.

You can two channels that are switchable with an included footswitch. Power comes from five tubes at the preamp level and four on the power amp.

Controls are basic with a three-band EQ and a presence control on the power amp. 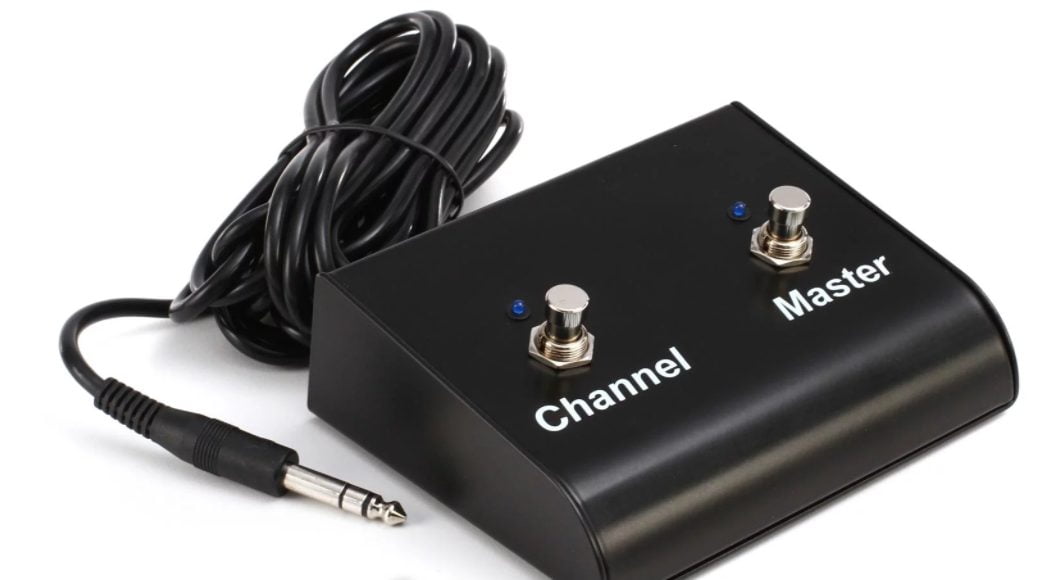 Footswitch included with the Diezel VH2.

Top it off with 100 watts and 51 pounds and you have a thunderous amplifier that can put out a ton of volume. It's hefty to carry around, which doesn't even consider the speaker cab. But for high gain and modern metal, there isn't much out there that can top the VH2, especially not outside of the Diezel brand.

IDEAL FOR: All metal styles, modern distortion, and high-volume gigging

If you're running a pedalboard that you want to stick with and you don't have a need for multiple channels, the Big Max will knock additional cost off your Diezel amp purchase.

It does have a gain knob, but you have to dial any changes in by hand, so this amp is great for pairing with a distortion pedal you like or for those that don't tend to change from clean to distorted very often.

You can think of it as essentially half of a VH2, with 50 watts, the single channel, and only five total tubes between the preamp and power amp.

Still, it's a powerful, modern-voiced amplifier that can handle a wide range of distorted at clean tones while sounding really good at high volumes.

For those wanting the really stripped down Diezel amp, this is about as minimal as it gets.

IDEAL FOR: Pedal-based rigs where there's no need for multiple channels

The D-Moll is essentially a smaller, more cost-effective form of the Herbert.

It's the opposite of the Big Max with a ton of flexibility including three channels with a massively wide gain range, MIDI foot controllable channels, and global deep controls for dialing in a thicker tone profile.

We like the Herbert just as much, but the D-Moll gets you the full Diezel experience for over $1000 less.

The VH4 came out in 1992 and was the first Diezel amp to ever be released.

It's still the most iconic and popular of the series, though more expensive than the other three in this list - usually $1000 - $2000 more - so we don't necessarily recommend it for everyone.

However, if you're wanting the purest experience with Diezel amplification, this is the amp that started the entire process. In includes four channels all with their own gain levels (clean, crunch, mega, and lead) and four tubes at both the preamp and power amp levels.

If you don't mind the added expense, it's an absolute monster of an amplifier. 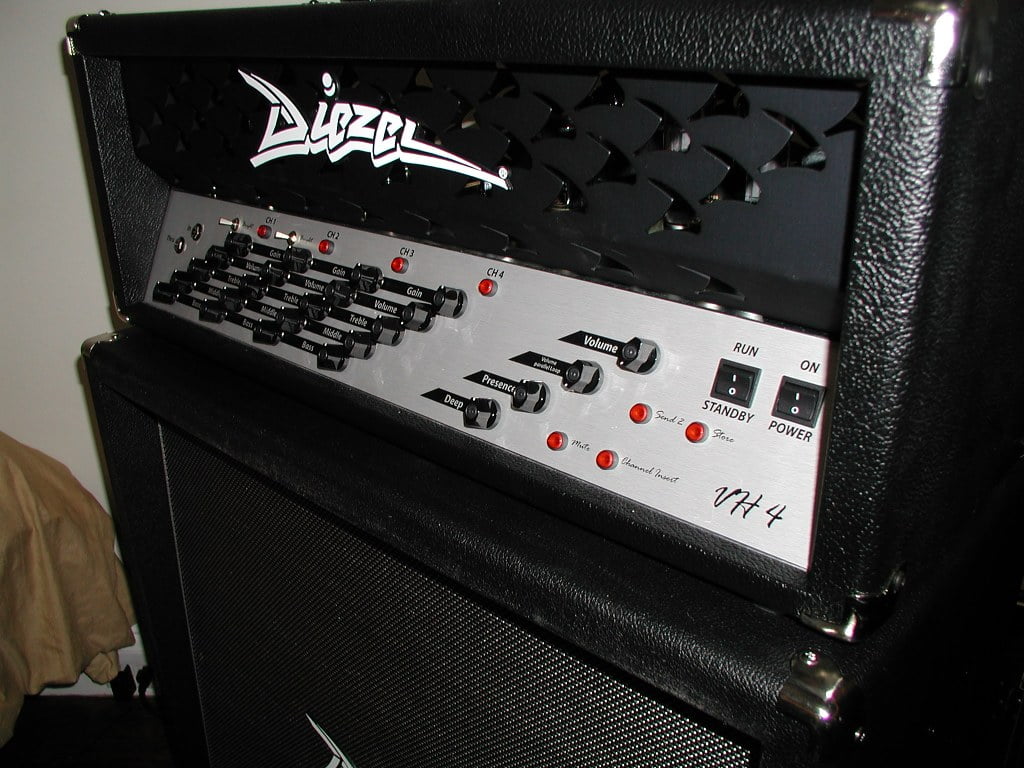 An older version of the VH4 head. Flickr Commons image via Dave Schumaker

IDEAL FOR: Recording, gigging, and all things modern rock

To summarize, our roundup includes the following four amplifier heads:

The primary reason I've included these four, particularly the first three, is the price tag. With the exception of the VH4, the other three Diezel amps get you in the door at a significantly lower price point, at least compared to the typical $4000 you'd expect to pay for the VH4 and the Herbert.

With options like the VH2 and the D-Moll, you don't have to go that expensive to get the value of a Diezel amp head.

Should I go cheaper?

If you do want to go cheaper, I might recommend Blackstar amps as a decent, modern-voiced alternative. Most of them are tube-powered but fall much lower on the price scale, more in the $500 to $1000 range.

They're a good economic alternative to high-end Diezel amps.

In terms of whether you should spend less, that depends on how invested you are in the electric guitar as your main instrument.

I've always believed that the amplifier, perhaps even more than the guitar itself is one of the most important aspects of an electric guitar rig. And if you're committed to the instrument and you have opportunities to play a lot, investing in a great amp brand like Diezel might be worth the effort.

Conclusion and Your Questions

We've only had time-limited opportunities to test and use Diezel amps in small sample sizes, which means we'd love to hear from those of you that have purchased from Diezel or played any of their amps extensively.

We'll answer there and help out as much as possible.

Also, refer to the next section for more amp buying resources and articles:

Written by GC Editorial on Amps and Roundups