For nearly three decades the VH4 has been a standard-bearer of modern rock tone and aggressive distortion. For guitarists in heavy rock and metal styles, it's hard to put any other amplifier in front of the Diezel brand.

Everything about the Diezel VH4 is modern metal.

For several decades this hand-built amplifier has been a favorite of modern rock icons, including Tool's Adam Jones, Korn, James Hetfield, and many more. As a company with only four employees in Germany, Diezel Amplification is a unique example of a boutique amp builder that has stayed small, even while garnering a lot of national notoriety in the guitar gear community.

We're taking a close look at the VH4 which is Diezel's flagship amplifier, originally released in 1994, and having remained largely the same since.

We'll look at the tone of the amp - both the clean and dirty channels - and the controls. We'll also give our opinion on the value of the VH4, considering it sits at such a high price point, and help you get a feel for where it would be most useful.

To begin, we've put the VH4 through our weighted amp ratings table, with the following results:

Compare the VH4 to Similar Amps

IDEAL FOR: Anyone looking for a modern amplifier that can handle all your gain and distortion needs

All four of the amp's channels have a gain control that varies in intensity.

It's this gain that makes the VH4 such a desirable amp, as it manages to pile on a ton of saturation and distortion without drowning out your notes or covering up melody. You get a lot of thickness and punchy tones out of power chords, especially on guitars that are tuned down.

This distortion profile is what makes the amp so popular with hard rock and metal guitarists.

Here's a particularly good demo of the amp by Dominic Cifarelli: 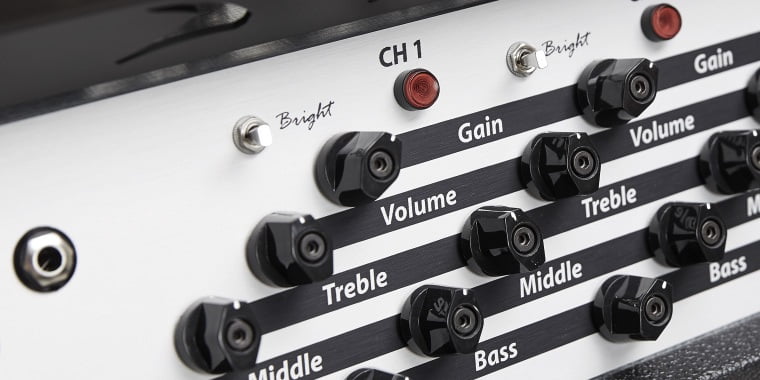 Controls on the first and second channel of the Diezel VH4. Image via Diezel Amplification

The amp's deep low-end tone manages to stay really tight and percussive, giving you plenty of definition along with the aforementioned thickness. Notes don't get lost in too much bass and you can clearly hear the changes in pitch.

While the amp's claim to fame is distortion, the clean sound is equally pristine.

I'll talk about both separately.

How does the clean channel sound?

You can hear a lot of what you like about the VH4's distortion in the VH4's clean tone. It still sounds thick, rounded, and not at all sharp or brisk. It's sort of the opposite of what you get from a Marshall tube amp, in that we certainly wouldn't describe it as "bright" or treble.

Even with the bright switch engaged (the first two channels have it) the clean tone has a smoothness that sounds really nice with a heavier, humbucker-equipped guitar.

It can also handle the snappier and bluesy styles of single coil electrics, like Fender Stratocasters, but even on the clean end it still exudes a lot of strength and metal.

What about the dirty (distorted) channel?

Since we've already covered a lot about the distorted tone in the VH4, I'll highlight a sound sample that I found to be a particularly good representation of the Diezel's high-gain profile.

As you can tell, pushing the gain higher gives you a lot of growl and widening of the lower frequencies. It's definitely what we'd consider a rhythmic type of gain, settling nicely into the crunchiness of low-end power chords and the thick response of timely palm muting

You can back the gain off to get a more tempered response, but the amp just seems to be at its strongest on the higher gain settings, even if you have to pair things back with lower volume. Less intense overdrive breakup can be dialed in by a more moderate gain setting - like the typical AC/DC distortion - but it doesn't really suit the amp as well as the smooth, rumbling distortion on high gain levels.

For reference, and based on our earlier mention of Tool, Adam Jones said the VH4 was a major part of recording the Fear Inoculum album, which has a lot of heavy, yet smooth and defined distortion sounds on it.

The title track is good example:

Keep in mind, there isn't a de facto "dirty" channel on the amp. All four of the available channels have a gain control, allowing you to make varying adjustments for each one.

The slanted knob setup on the VH4's front panel gives you easy access to knobs and the exact same controls for all four channels. What controls are available at the preamp level? There are five total, made up of volume, gain, and a three-band EQ.

Again, these are all controls that can be manipulated at the preamp level.

One of the most helpful aspects of this setup is that you get four channels with dedicated volume and gain controls, meaning you can have different levels of distortion with different output levels coming from each channel.

All the controls on the front panel of the VH4.

From there, the VH4's power amp stage has the following controls:

The presence and treble controls start pretty low at 4kHz (most start at 20kHz) which keeps the power amp's response naturally warmer and thicker. The Deep control is nice to have for adding more bass into the mix, which is handy if you want to thicken up a guitar with single coil pickups.

It can also be helpful for pulling thickness out of your tone if you feel like it's putting out too much "boom" and isn't tight enough.

Cost and Value of the Diezel VH4

Where fans and prospective buyers of the VH4 start to feel some disappointment is when they see the price tag.

At over $4000 retail it's one of the single most expensive amplifiers on the market and unattainable for most players that aren't heavily invested in their instrument.

As a result, we'd probably recommend that you be earning some kind of income from your guitar playing before you invest in an amplifier as expensive as the VH4.

It's just too expensive to be worth it if you aren't earning money from your guitar rig, at least in some capacity. This also doesn't consider that the VH4 is just an amplifier head, which means buyers will also have to account for the cost of a speaker cab.

Why is it so expensive?

What in particular runs up the price of the the VH4?

Not only is it built with extremely high-end parts in both the preamp and power amp stages, but the VH4s are also built by hand in a company with only four employees. The builders at Diezel Amplification build all their amps this way, without any kind of assembly line or mass production cost-cutting.

As a consequence, this requires a lot of hours. However, if getting an amp that's hand-built is valuable to you, this is one of the first companies that comes to mind.

Their reputation as a boutique builder is one of the best.

There aren't too many amp companies left that can offer you an amp as nice as the VH4 and guarantee that it has been built entirely by hand.

That brings us to the final point of our review:

In what context does the VH4 make the most sense?

We've already established that, stylistically, it's most suited to modern rock and heavy metal playing styles. If you also consider the cost, this amp is almost exclusively limited to advanced players, or those who play guitar in some kind of a professional capacity.

Given those caveats, we'd have a hard time finding a nicer amplifier and would recommend it for hard rock and metal players.

In this section we'll cover some frequently asked questions about the Diezel VH4, based on our review of the amp.

Would I be better off with the VH4 pedal?

Since the Diezel distortion is so popular, they do make a version of their amp in pedal form, simply called the Diezel VH4 Overdrive pedal. 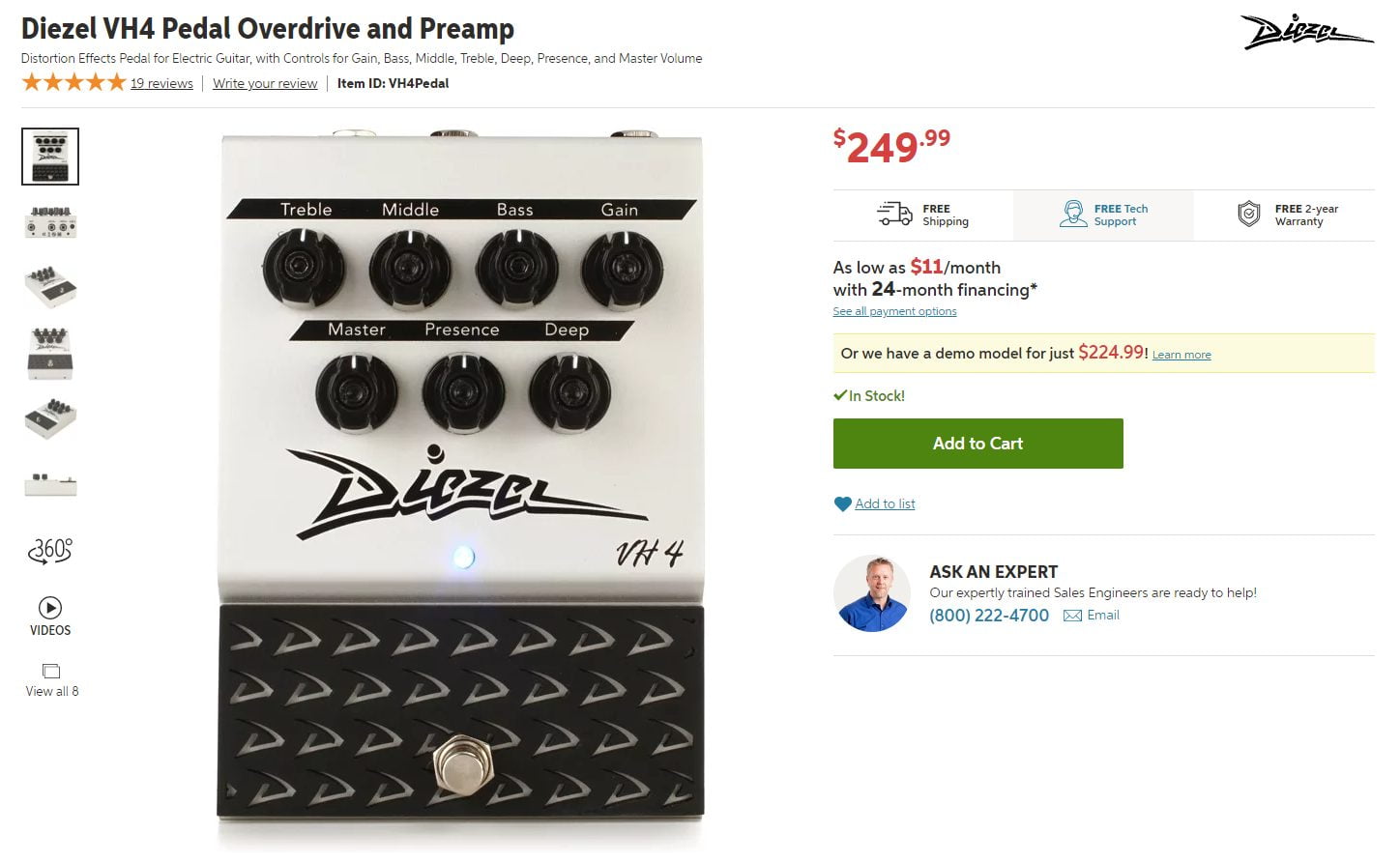 The pedal version of the Diezel VH4.

While it's not exactly cheap by pedal standards, it's dramatically more affordable than the actual VH4 amp. For those wanting the distortion benefits - perhaps if you already have an amp you like - adding the VH4 pedal for $250 is a viable alternative.

Is the VH4 exclusively for advanced players?

Is there any space for a non-professional player to invest in the VH4?

It's certainly possible if you don't mind the expense, but we would encourage potential buyers to view an amp like this as a serious investment. Pursue it only if you're completely committed to the electric guitar, and settled in the style of music that you like to play.

Because an amp this expensive must be a good fit stylistically, which means we wouldn't recommend it for those who are really into lighter styles like jazz or blues.

Are there less expensive options from Diezel?

Diezel has expanded their amp lineup significantly since the mid '90s, though their inventory is still rather small by comparison to other amp manufacturers.

As a result, there are just a handful of options that are cheaper than the VH4, notably the following:

The VH2 is just a stripped down version of the VH4 with two channels instead of four. It's a fantastic alternative that takes well over $1000 off the retail cost of the VH4, yet with a similar level of tone and distortion quality.

The Big Max is the cheapest at $2400 retail, but takes you down to a single channel.

Do you have questions about our review of the Diezel VH4?

If so, feel free to drop a line in the comments section below and we'll do our best to help out.

First-hand accounts of those who have played or owned the VH4 are welcomed there as well.

Talk to you soon.