It's cheap, well-built, and puts out a solid tone even at higher gain levels. For beginners and those looking for a simple, budget-friendly distortion pedal, the Ultimate Drive is a diamond-in-the-rough type of purchase.

This isn’t to say that you might want a dirt cheap distortion pedal, but you might not want to spend big money on one either.

The good news is this:

You don't have to put up with either extreme.

The cheap distortion pedals do exist and they’re more plentiful than many people realize. They also meet a remarkable high standard of quality, with many distortion pedals under $80 having made their way onto professional pedalboards.

I'll cover five that I can vouch for personally, which include the following:

The market (both retail and resale) is flooded with used distortion stompboxes.

This is because people buy a lot of them, then turn around and resell them so they can get something else. Somehow a lot of them end up on sites like Amazon, EBay and Craigslist going for a fraction of retail cost.

We’re going to “curate” the cheapest, which will take into account the typical used cost and what you can expect to pay if you buy it new (retail).

If you just want a cheap distortion pedal and you’re not terribly picky, this is where you’ll find a good fit.

You can checkout our top guitar pedals list for more suggestions and effects pedal resources. 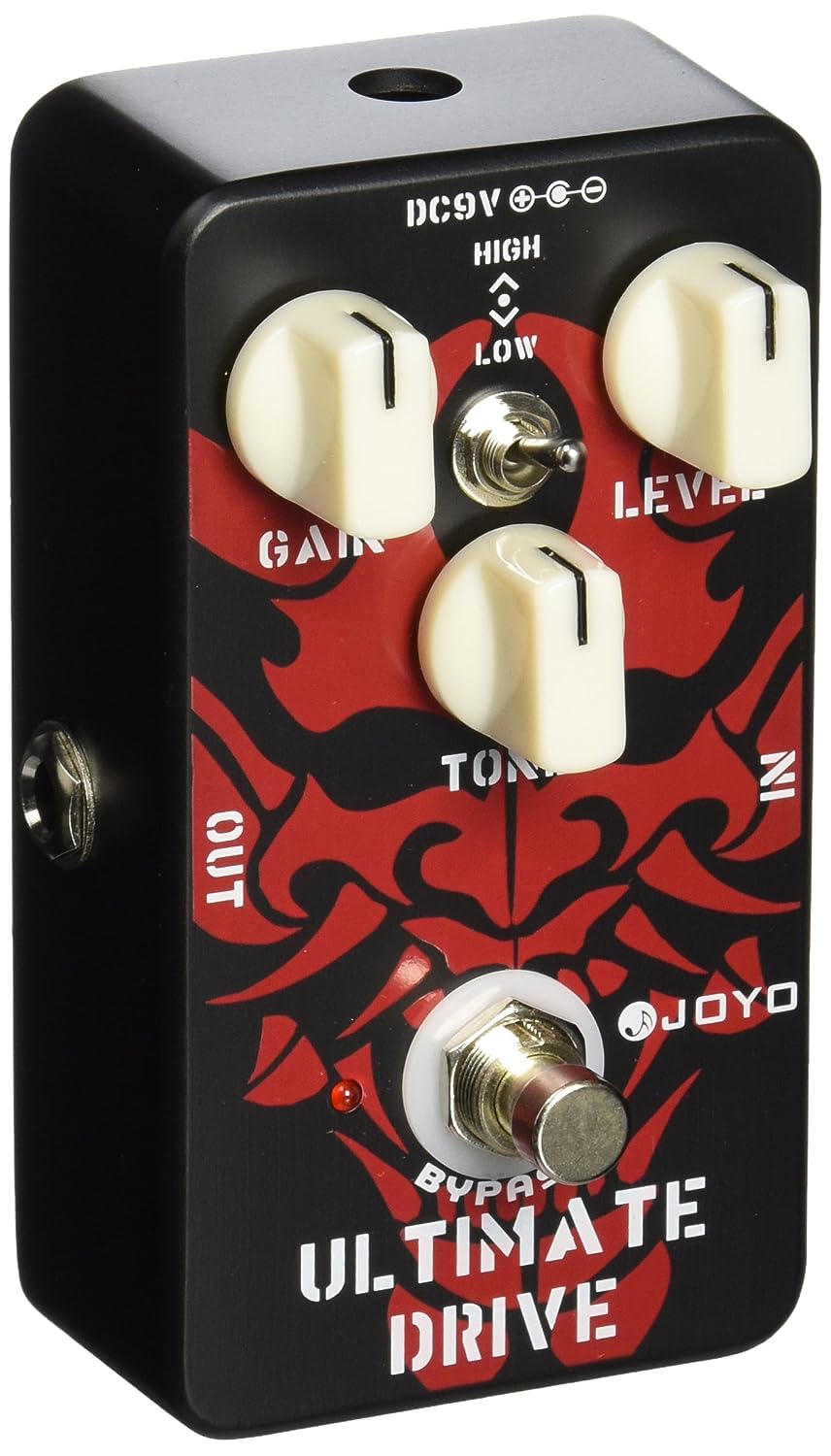 For an economy line, Joyo has some impressive stompboxes with boutique-level features, and the JF-02 Overdrive is no exception.

It's a distortion pedal with true bypass wiring, which gives you an added layer of noise elimination and maintains the natural tone of your guitar's signal as if it were running straight through a cable.

This pedal's tone is absolutely astonishing when you consider the price tag.

All three controls, as well as the low/high switch, are incredibly well-calibrated and responsive, allowing you to create a wide range of tones that I'd describe as bluesy and vintage, leaning more towards a warm tube sound with emphasis on bass in the EQ.

However, bright tones also sound great, giving you some break-through on the higher notes without sounding overly shrill.

It doesn't sound metal or "modern" in the least, which makes the devil painted on the front a bit of a curious addition.

However, if you can ignore the devil painting, you're getting a solid vintage rock distortion that can produce a wide spectrum of gain levels from light bluesy fuzz to a more distinct lead saturation and almost anything in between.

What I found equally impressive (and alluring) about this pedal is that the community approves of it with a nearly unanimous verdict.

While some cheap pedals will get the benefit of the doubt just because they're low-cost (and therefore low risk), it doesn't seem like the bar has been lowered for JF-02 just because of its price tag.

The love for this pedal is palpable and seems to be based on tangible merits and a fairly high bar.

YouTube fans and commentary on some of the demo videos were all positive from what I was able to see.

Some positive feedback for the Joyo JF-02 overdrive pedal.

Amazon feedback was yet more gushing and almost unanimously positive:

Some Amazon reviews of the Joyo JF-02

Who It's Perfect For

This Joyo JF-02 will appeal to beginners and those who just want to try a distortion pedal with a more light and vintage bend.

At the same time, I wouldn't shy away from it if you're in the intermediate stages either. The pedal just sounds good, so regardless of what it costs, I believe it has use and value to guitar players in a wide variety of skill levels and situations.

Bedroom jamming, garage bands, basic gigging and even light recording work can benefit from the JF-02.

IDEAL FOR: Budgets and beginners The Ibanez Tube Screamer Mini is similar to the original 808, in terms of its tone and the added bite you get on the higher EQ settings. It's overdrive can also have a really smooth and tube-esque appeal to it, which also sounded like the onboard overdrive from the Fender Deluxe amplifiers.

Reverb's demo video showcases it all in under two minutes:

It's a fully analog pedal with a true bypass connection that's, of course, space-saving and very cost-effective.

Even if you disregard the size, which we don't care as much about, the tone and budget-friendly pricing is hard to pass up. We tried it out with bass, electric and even an acoustic guitar setup.

The tone for all three was top notch. 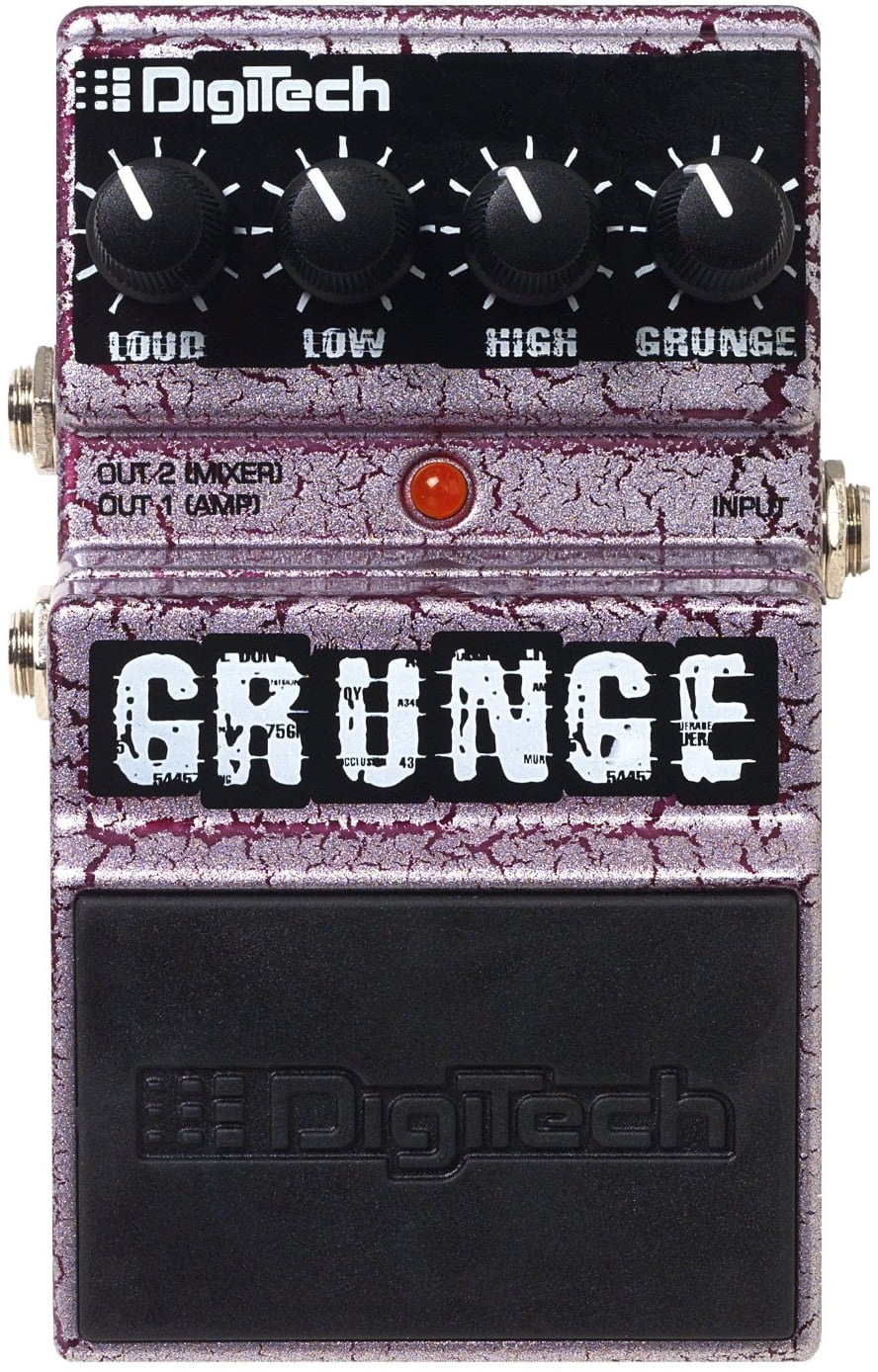 DigiTech's Grunge Analog distortion is a cut above in a number of ways.

First, it has a great price point, dipping into the $30-$35 range fairly often. Yet, this number holds close to its $40 retail value, even after being on the market for a long time.

While it is no longer being produced by DigiTech, the pedal is so popular that it still enjoys widespread availability from almost all major music gear retailers.

From the beginner in the early stages of bedroom jamming, to professionals running full pedalboards, the Grunge distortion is accommodating of any skill level.

I like it for beginners in particular, who are looking for a cheap distortion pedal that they'll continue to use well past the early stages of their playing career.

Because, despite being inexpensive, the Grunge brings a lot of quality to your board.

It doesn't feel cheap or like something you'll need to replace when you get serious about guitar.

Anyone looking for a distortion pedal on a budget can get great value value and quality with the Grunge so I'd recommend it without hesitation.

Can I set it up in stereo?

The pedal includes two outputs, one labeled AMP and the other labeled MIXER.

Note that these two designations are interchangeable.

You could run two amps, mixers or swap the amp and mixer input. It's of no consequence as they're both identical outputs, meant to  support a stereo connection to two sources.

This is how you'd set it up, per the user manual:

Some setup help for the DigiTech Grunge pedal.

The Grunge has a two-band EQ with a LOW and HIGH knob that are paired with a GRUNGE and LOUD control, allowing you to dial in gain and volume independently of one another.

The tone is a rough and edgy distortion, reminiscent of the Seattle grunge scene of the early '90s (hence the name).

If that's your preferred style, the Grunge provides. 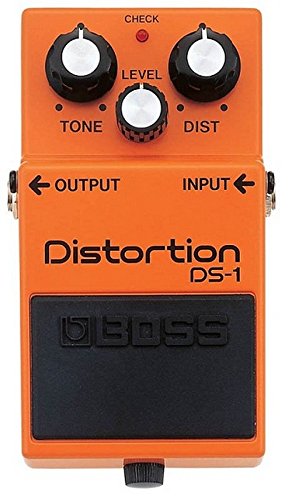 The Boss DS-1 is cheap (under $50) and one of the most popular distortion pedals on the market, ideal for all styles and skill levels.

The tone it produces is a smooth, vintage-style gain that pairs well with a tube amp or a treble-friendly guitar like a Fender Stratocaster or Jazzmaster. The distortion is comparable to a fuzz pedal or Hendrix-style overdrive.

It has a grungy bend as well, which occupied the likes of Kurt Cobain's pedalboard for a number of years. 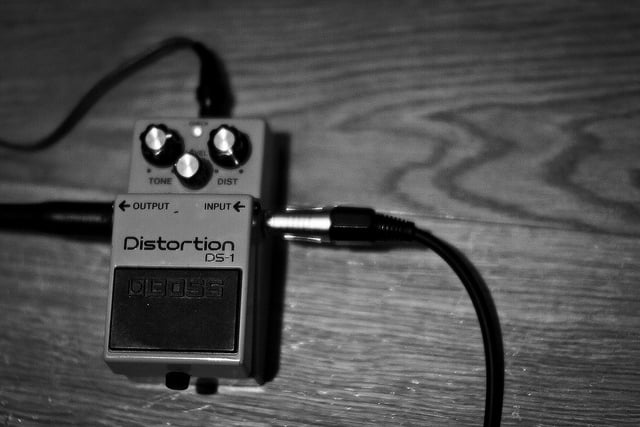 The onboard distortions you get with Fender tube amps, like the Deville and Deluxe, are also similar comparisons. I'd say the DS-1 is, however, slightly more edgy.

In most cases I've seen it placed at the beginning of pedal lines, right after a wah though before all the other stompboxes.

In the picture below they've placed the DS-1 after the tuner, but before everything else: 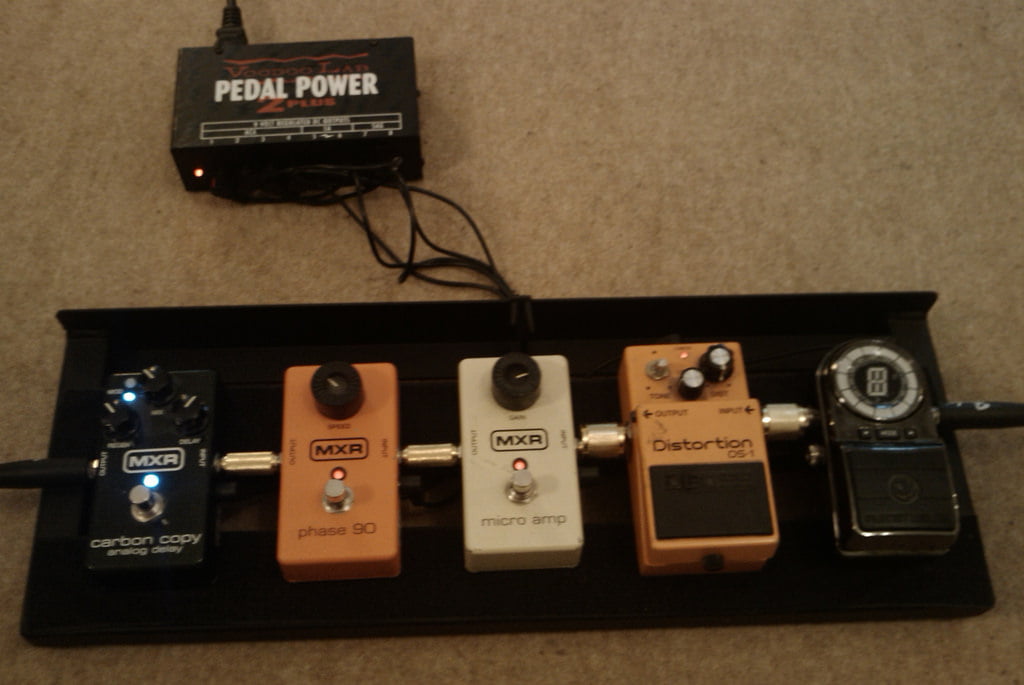 The DS-1 works best at the beginning of a pedal chain, as pictured here. Flickr Commons Image via WetWebWork

Bedroom jamming, professional rigs and session recordings can all be workable situations for the DS-1, especially if you need a lighter distortion that leans more towards the blues side of the fence.

Keep in mind: It's not at all a "metal" or modern tone.

A three-band EQ adds a some expected versatility but doesn't turn the DS-1 into a heavy distortion.

The stompbox typically retails around $45 and often less if you keep an eye on the used and refurbished options.

IDEAL FOR: Budgets and classic rock

Are cheap distortion pedals worth it?

The electronics of a distortion pedal are fairly simple, which is part of what contributes to the low cost. Yet it doesn’t change the old adage that you get what you pay for.

What I’ve found to be characteristic of most cheap distortion pedals is that they’re lighter and more bluesy sounding than their more expensive counterparts. If you want a really deep, modern distortion with a lot of low end, the cheaper pedals probably aren’t for you.

On the other hand:

If you’re into classic rock, blues or jazz, a lighter-sounding distortion will probably be a better solution for you.

So, are they worth it? That just depends on where you are as a musician and what sound you’re looking for.

What if I want to spend big money?

Some of the nicer Boss pedals, like the ST-2 Power Stack are excellent pedals for around the $100 mark.

If you’ve got $300 to spend (and who doesn’t?) you could go with something like the Empress Effects Heavy which is a dual-channel setup and one of the nicest distortions on the market.

For a more versatile distortion modeler, try the Line 6 DM4 for around $250.

Do prefer a cheap distortion pedal that didn’t make the list?

I’d love to hear about it.

Get in touch via the comments section below.

Distortion Pedal or Amp: Which one Should I use?

Written by Bobby on Pedals and FAQ

Distortion Pedal or Amp: Which one Should I use?