What are some of the average electric guitar weights?

In this article we'll answer that question in short, then explore all the different variables involved. We'll look at the factors contributing to the weight of an electric guitar, as well as what to expect from different brands and guitar models.

We'll cover the Stratocaster, Telecaster, Les Paul, and others.

For those wanting to skip the details and get a short answer, here's a summary of the typical weight and weight range of an electric guitar.

On average, electric guitars weigh about eight pounds which is approximately 3.6 kilograms. The range of electric guitar weight runs from about six pounds on the low end, to 12 on the high end, which is impacted primarily by the type of tonewood used and the shape/type of the guitar's body.

That's the simple and short answer, but here's what we'll cover that goes into more detail, for those who want to explore other aspects of electric guitar weight:

The body and neck are the primary contributors to the weight of an electric guitar.

Within those two pieces you have the shape and the type of tonewood both contributing to the overall weight of the guitar.

When you're dealing with tonewood in an electric guitar, the weight is going to be based on the wood's density. The more dense the wood grain is, the heavier it's going to be because there are less gaps.

Tonewood that is less dense will weigh less, assuming a uniform amount of tonewood.

Generally speaking, here's how the weightiness/density of popular tonewoods break down:

It's hard to put a number on tonewood because we aren't dealing with a static amount. The exact weight that a guitar's body takes up will also be informed by the shape of the body in question.

Shape and Size of the Body 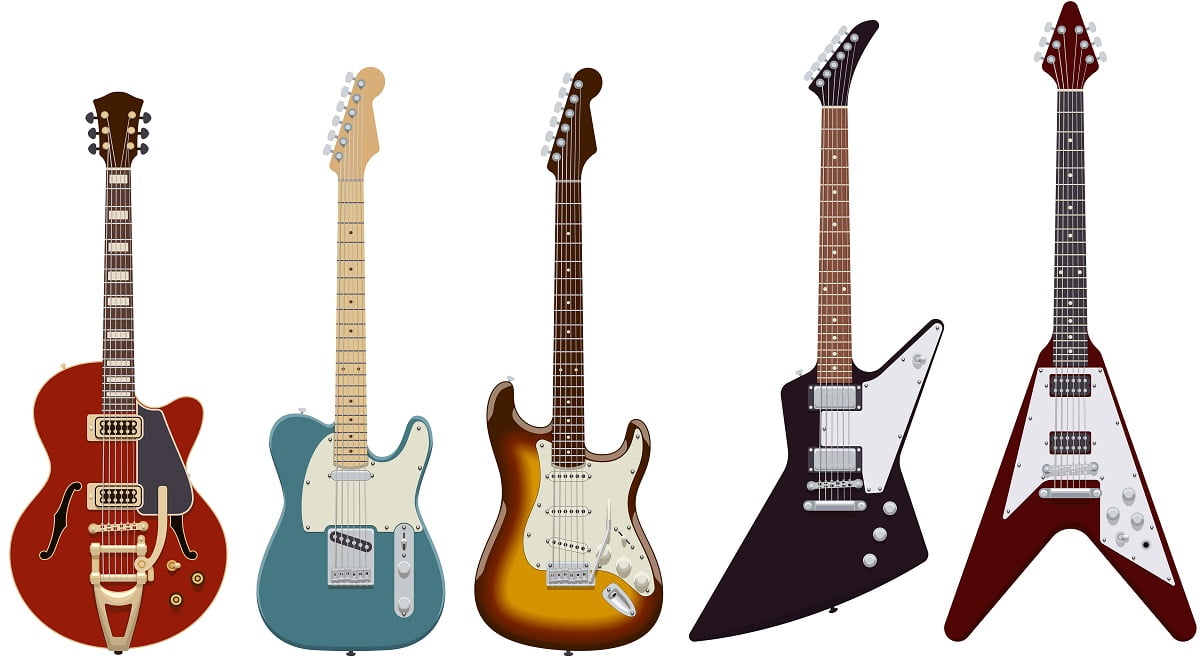 These are all potential shapes that you could run into, and the weight between them will vary. However, the difference in weight between shapes isn't quite as significant, without knowing the tonewood used. We'll get into these shapes more as we explore weights of specific guitars.

Another significant factor contributing to your electric guitar's weight is the type of body, which is not to be confused with the shape or tonewood.

Body type is generally one of the following:

Most electric guitars use a solid body type, which is almost always going to be heavier. Though we see a lot of semi-hollow and chambered electric guitars as well. I'll cover the weight implications for all three types.

A solid-body electric guitar is a completely un-hollow chunk of wood, with routing only made for electrical components and parts. These guitars are almost always heavier than the other two types, though certain types of weight relief are used, particularly on Gibson electric guitars, which are historically some of the heaviest.

No electric guitar is completely hollow (that would make it more of an acoustic guitar), but some have certain sections of the body hollowed out, making them lighter and more airy than full solid-body electric guitars. Many guitarists also like the aesthetic benefit of the semi-hollow body design.

A chambered body is a type of weight relief where only small components of the electric guitar's body are hollowed out, and often covered up by the top piece.

Refer to this article by Gibson on chambering and weight relief for images and examples.

In this section I'm going to give some weight examples for specific models of guitars from popular brands. If you have other guitars or brands you're curious about, feel free to leave them in the comments section below and I'll do my best to help out.

Even with the modern weight relief I referenced earlier, the Gibson Les Paul is still one of the heavier guitars on the market. Most Gibson Les Pauls run between nine and 11 pounds.

Depending on the tonewood, Fender Stratocasters weight approximately eight to 8.5 pounds.

A typically Fender Telecaster is a little lighter than the Stratocaster, running between seven and eight pounds depending on the tonewood used. Alder is the most common for both Strats and Teles.

Most Gibson SGs have a similar weight to the Les Paul since both models use Mahogany for the body. This puts the SG weight around nine to 10 pounds.

With a Mahogany body like the Les Pauls and SGs, the PRS Custom 24, 22, and McCarty, all weigh within the nine to 10 pound range. 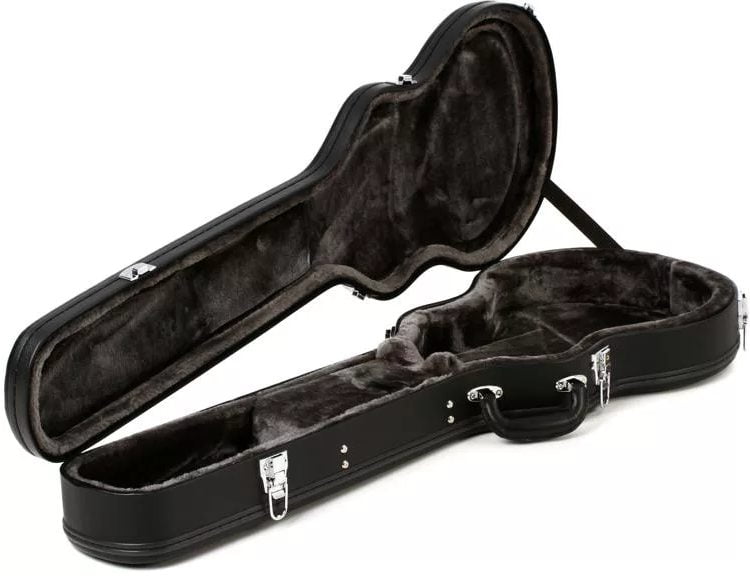 Electric guitar cases contribute anywhere from seven to 10 pounds of weight to the total.

Now that we've covered some of the specific weights for different guitars, how much weight does a case add to the carrying load?

Just to be clear, I'm talking about a hardshell case and not a gig bag.

The typical hardshell case is actually going to weigh as much - if not more - than the electric guitar itself, hovering in the seven to 10 pound range. Adding that to your electric guitar can easily put the carrying weight above 15 pounds.

What is the heaviest guitar?

While double neck guitars are typically going to be some of the heaviest, those are not common or regularly used.

Even with chambering and modern weight relief, we still see higher numbers for the Les Paul because it uses solid Mahogany.

Why does a guitar's weight matter?

The comfort issue is common sense.

As a guitar gets heavier, it's also going to get more uncomfortable and harder to play, especially for beginners, or those who play a lot standing up. And this brings up the question: Why not just always go lighter?

The reason we don't just automatically go with a lighter guitar, is that it impacts tone as well.

Heavier guitars, with more dense tonewood types, tend to have a darker and warmer tone, while lighter guitars - with more airy tonewoods - have a brighter tone with more sustain and more reverb.

It's a scale that you need to balance, and try to hit a point where you're comfortable and you're getting the sound you want out of your electric guitar.

That's covers all the basics of electric guitar weight. To summarize, most electric guitars weigh in around eight pounds, while variation depends largely on the tonewood type, the body shape, and the body type (referring to chambers and weight relief).

If you have any additional questions on this topic, or have some specific electric guitar weights you'd like to share, drop me a line in the comments section below and we'll chat.

Do electric guitars have batteries? How to Tell

Written by GC Editorial on Electrics and FAQ

Do electric guitars have batteries? How to Tell

How much do electric guitars usually cost? 12 Examples

Written by Bobby on Electrics and Info

How much do electric guitars usually cost? 12 Examples