Fender's CD-60S acoustic is one of the cheapest that still come with a solid wood top. In the "E" version you also get a versatile onboard preamp with a four-band EQ. Though tone doesn't always live up to the specs, the Fender CD-60S and CD-60SE are both fantastic beginner acoustics.

Beginners in search of a deal will get great value from this popular economy acoustic.

In our Fender CD-60S review we evaluate the guitar's performance in seven different categories, based on actual use and testing. Keep in mind: These grades are given based largely on how the guitar plays and feels. It's not simply a rundown of specs.

For our Fender CD-60S review we're focusing primarily on tone, wood, and construction, in an effort to establish an ideal buying scenario.

We want to help you understand whether or not this specific guitar will work in your situation.

Our ratings system, that we put all our acoustic guitar recommendations through, score the following numbers for the CD-60S, with different weights for each category:

Price Alert (based on Sweetwater retail)

IDEAL FOR: Beginner guitar players and anyone looking for a budget-friendly acoustic

Curation of reviews from Sweetwater, Amazon, and Musician's Friend

We've seen some publications like PMTV describe this acoustic as "not too light or too chunky."

We'd disagree as the tone profile of the CD-60S is decidedly lighter and not as full as we'd like to hear. Thus, we only give it a 70 in our tone quality rating. It sounds okay, but it doesn't have the warmth and fullness that you get from even marginally more expensive acoustics.

After our audit of the CD-60S, we'd argue chunkiness is not the problem.

Single notes have good sustain and even fast, melodic solos sound somewhat thick. But open chords and barred progressions are less satisfying and don't draw as much quality out of the solid Spruce top as what you'd get on something like the more expensive Taylor 114ce.

The starter pack version of the Fender CD-60S acoustic guitar.

It's still a fantastic beginner acoustic guitar. Yet certain reviewers are overselling it beyond a beginner's context.

The solid top does seem to give it a wider resonant projection than its laminate counterpart, the CD-60 (without the "S"), but tone concerns keep it firmly in the beginner guitar camp.

We wouldn't recommend it for intermediate players or any kind of performing. 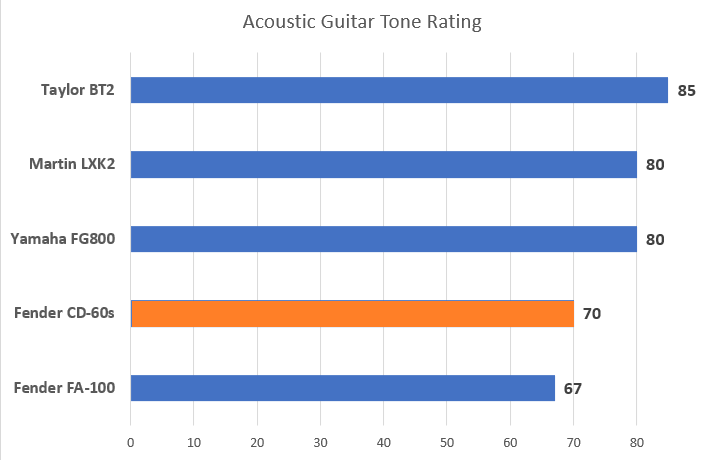 Compared to similar guitars, the CD-60S, a great beginner acoustic, doesn't compete beyond the beginner stages.

In the Yamaha FG800, the Martin LXK2, and the Taylor BT2, you have better tone with a more professional sound that's lacking in the CD-60S.

The LXK2 and BT2 are all laminate, making it difficult to tell exactly what's causing the tone differences in each guitar. Based on our testing, it's not as simple as saying, "a solid top always sounds better." It can be part of the solution, but not the only part of the equation. 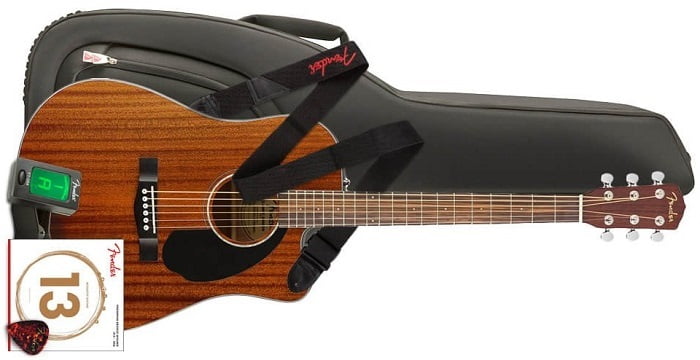 A package version of the Fender CD-60SE acoustic guitar.

As we've already mentioned, the tonewood mixture in the CD-60S includes the solid Spruce top. In past versions of the CD-60, Fender has also used Mahogany tonewood for that top piece.

For the back and sides Fender still uses a Mahogany laminate.

This is a fairly typical combination, which helps create the brighter, more intense tone of the CD-60S, similar to the melodic tone profile of the Taylor 114ce.

Though Mahogany is not as visually appealing, it is one of the most widely used tonewoods in the world. When used in the back and sides it's known for producing warmth and punch, though in the CD-60S it seems to go much harder after the midrange frequencies.

Keep in mind, the CD-60 was originally an all-laminate acoustic.

Based on our testing, it seems Fender threw a solid Spruce top over this guitar at cost to some of the natural warmth and punchiness you should get out of the Mahogany. It seems to favor the Spruce brightness more than the Mahogany warmth.

A single ply back doesn't look at nice as the two- and three-ply setups, but in our experience it's really hard to make a tone quality distinction between them.

The difference in sound going from one ply to three, is negligible.

Inside the CD-60S you have a quartersawn X bracing pattern which is hard to evaluate without a significant amount of time playing the guitar.

You can see inside the sound hole that it's scalloped, which is a good sign.

Acoustics with scalloped bracing tend to "break in" and age a little better than those without it.

Fender doesn't make any mention of the method used to attach the neck to the body, though from looking at the guitar we'd guess it's similar to the mortise and tenon joint used in a lot of Martin acoustics. This is a common construction method that isn't going to drastically change your experience of the instrument one way or the other.

Overall, the CD-60S checks off a lot of boxes we like to see in the construction category. It has the solid top and scalloped X bracing, which gives it some natural longevity and a longer lifespan than most acoustic guitars in this price range. 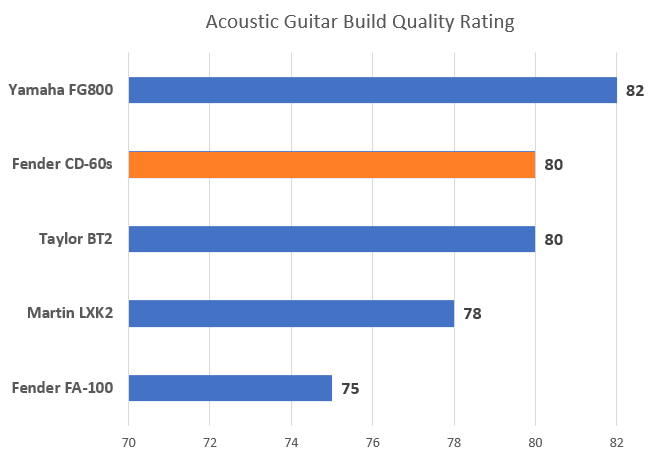 The CD-60S checks off a solid top and a good bracing system, giving it a solid four out of five in this category.

The reason we don't rate it higher than 80 is that the CD-60S doesn't seem to get as much good tone out of its construction as other guitars. Good construction - in and of itself - is not the end goal, but a good sound.

The Fender CD-60S recoups points is in its electronics system, which you get when you buy the CD-60SE or CD-60CE versions.

That system is a Fishman add-on with a two-band EQ, volume, a tuner, and a battery life indicator.

You get a Fishman preamp in the "E" version of the Fender CD-60, providing a significant boost in flexibility and usefulness.

In some cases, we thought the amplified signal through the Fishman sounded better than the natural resonance of the acoustic.

While it's a fair assumption that this preamp is designed cheaper for wide distribution, we still like the flexibility and improvements that come with it. For those considering the CD-60E, we'd recommend the preamp be an important part of your "want list."

If not, you're paying for something you don't need, when you could get a better unplugged acoustic elsewhere.

Of the beginner guitars we like most, the CD-60E pumps the most resources into their preamp and pickup system. 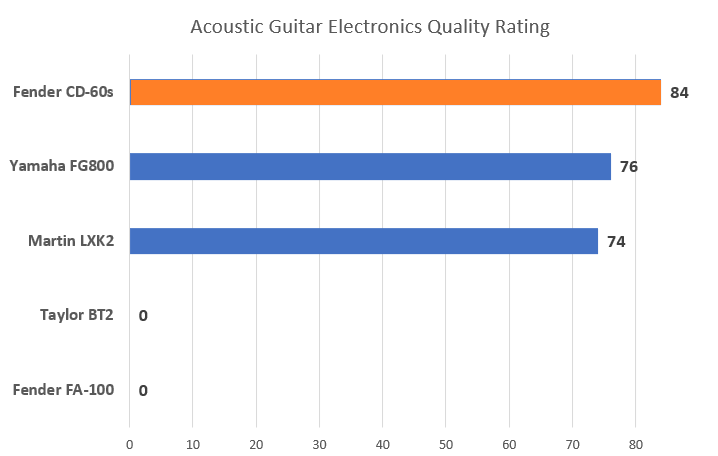 Of our favorite beginner acoustic guitars, the Fender CD-60 has the best-sounding preamp, with all the basic functionality.

One of the CD-60S's most attractive features is price.

Since we've given it an overall rating, we can compare those numbers with approximate retail and ratings of similar acoustics. This will help us get an idea for how value can be calculated using a simple Excel graph.

In the following diagram, lower and further to the right is better: 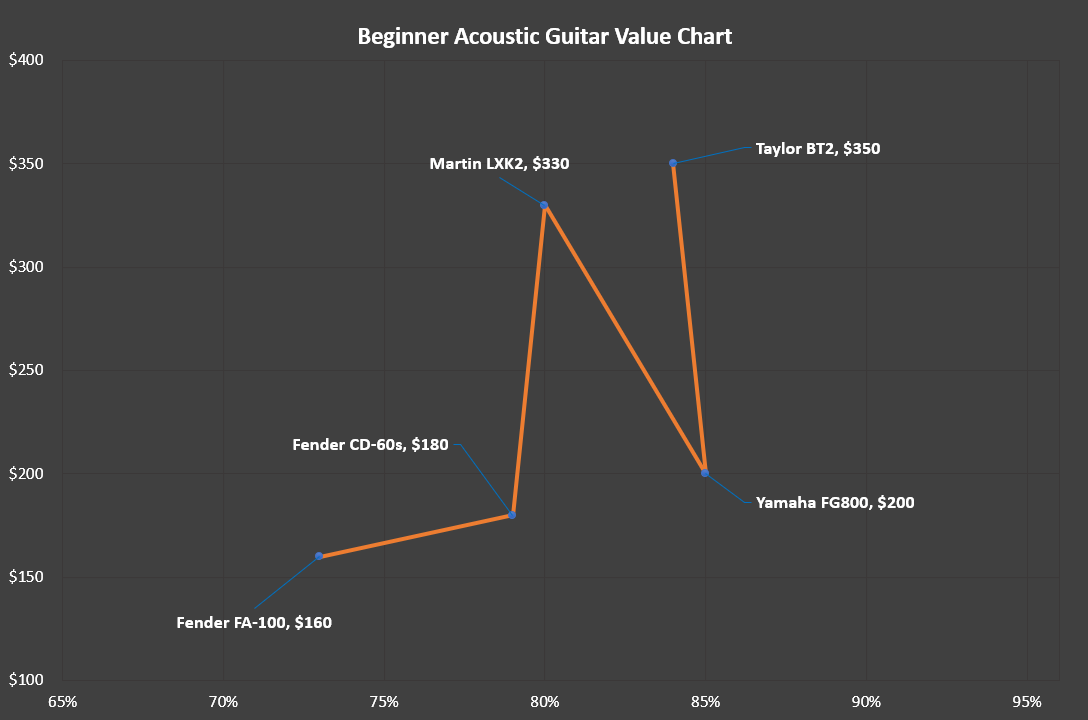 The Fender CD-60S comes in with a low price tag, though doesn't outperform the more expensive models. According to this graph the CD-60S is well-suited to its price tag.

This graph shows us that the Fender CD-60S is priced about "right" and consistent with its quality. You can see it performs better than the Martin LXK2 and the Fender FA-100, but not as good as the Yamaha FG800. It's not a perfect comparison, but gives you a general idea of how much quality you're getting for the price.

Yet, we've been a little disappointed with the tone of this guitar and would only recommend it as a pure beginner's acoustic. In that context it's an excellent deal, especially given the noteworthy spec sheet.

For those advancing beyond the beginner stage, it's worth a little more money to upgrade to something nicer.

When they delve into other areas like acoustic guitars and (heaven forbid) guitar lessons, the results are often mixed and hard to pin down.

While we certainly like the CD-60S for its low price and desirable features, it's firmly in the beginner acoustic camp without much headroom.

If you have thoughts or questions about our Fender CD-60S review, or perhaps other similar acoustic guitars, feel free to leave those in the comments section below.

Inquiries about our ratings and other suggestions related to your particular situation are also welcomed there.

Written by Bobby on Acoustics and FAQ