Which boss Katana Amp should you buy?

Take our quiz to get a suggestion based on your situation.

There are six amps in the Katana series that we've included in this quiz. Note that we've left out the Katana Air. Just answer a few questions and the quiz will provide a recommendation based on your answers.

Currently there are seven total amps in the Boss Katana series. On this page we've built a quiz that will help you easily figure out which one is your best option, simply by answering a few question. The Katana series is a great group of solid state amps that have been very popular since their release.

Note that the quiz is weighted to give you a more contextualized answer. In other words not all the answers carry the same amount of influence.

Still, it's always important to understand that these results should be taken with a grain of salt.

Find the Boss Katana that Works for you

Which Boss Katana amp should I buy? (Quiz)

This quiz has seven questions that will help you decide between the six main versions in the Boss Katana amp series. The only one we've left out is the Katana Air. If you have questions feel free to drop them in the comments section below. Click the green start button to begin: 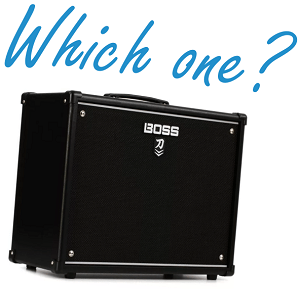 Use this button to launch our search bar and then type in the amps you want to compare, Katana or otherwise. Add whatever amps to the compare bar to see live pricing and features side by side.

We often link to products with partner links to places we trust, like Sweetwater and Reverb. If you buy through these links (orange buttons), we might earn a commission though at no extra cost to you. Consider supporting us this way if you decide to buy some gear and help keep Guitar Chalk ad free.

Table of Contents (click to jump)
Which Boss Katana amp should I buy? (Quiz)
The Budget Question
Things to think about
What about the number of channels?
Which Katana is the best overall?
Quiz and Katana Questions

The budget question in this quiz is pretty heavily weighted, though it's also important to note that there isn't a ton of difference in price between amps in the series. The mini is the cheapest, but the difference between that and the most expensive option - the Artist MKII - is only about $400.

If possible, we'd recommend buying based on other factors and features that matter more to you.

Still, in the quiz we have to respect the budget.

Things to think about

The factors involved in choosing a guitar amp are pretty standard, though we've tweaked a few things that apply more to the Katana series. Here's what the quiz addresses and what we recommend paying attention to:

Again, the quiz addresses all this. It's just a few things to keep in mind as you shop.

What about the number of channels?

Channels in modeling amps like the Katana are not nearly as big of an issue as when you're dealing with tube amps. Tube amps need physical circuits for multiple channels, while digital solid state amps can have them in the form of banked presets.

All of the Katana amps allow you to scroll through presets, so channels aren't really a concern.

Which Katana is the best overall?

As mentioned, the price range for the Katana series is really low, so we like the Artist MKII which is the largest, most expensive, and most feature rich option of the series. We'd say that's the best one of the bunch.

If anyone has questions about the quiz or the Katana amps, feel free to send them via the comments section below and we'll help out as much as possible.

Which Fender Stratocaster should I buy? Helpful Quiz

Written by GC Editorial on Electrics and Quizzes

Which Fender Stratocaster should I buy? Helpful Quiz

Written by GC Editorial on Amps and Info