Added help and how-to sections for the CODE 50. Added information about the sound quality and control. Also added compare buttons for product table.

With algorithms developed by engineers at Softube, the CODE 50 employs a wider range of amp models and sounds than past Marshall modeling attempts, and does so with a far better tone quality that's hard to complain about, even without any kind of tube power.

You can get a lot of the feel and sound of a true Marshall tube amp with the CODE 50, which has no tubes in it.

Even that small amount of clean breakup that's so appealing in tube amps can be easily mimicked in this amp, simply by picking harder. It's even hard to distinguish between the CODE 50 and some of the models it emulates, particular the Marshall brand models.

Here's how I graded the CODE 50 in Guitar Chalk's weighted amp rating system:

Marshall's demo does a good job of giving you a quick rundown of the sounds. For instructions on dialing in specific sounds, scrolling down below the table of contents for this page. 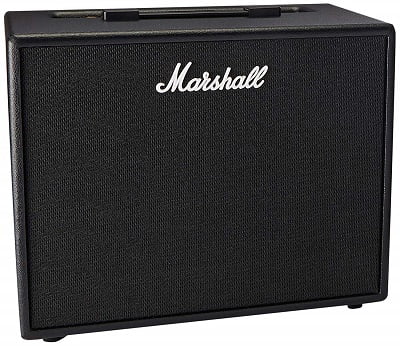 IDEAL FOR: Beginners or intermediate players looking for an all-in-one amp solution that's versatile and easy to transport.

Curation of reviews from Sweetwater, Musicians Friend, and Amazon

How to Get Started with the CODE 50

Once you unbox the Marshall CODE 50, here's how to get started.

1. Set the power to OFF and plug in the amp

Plug the included power cord into the rear power jack, making sure the amp is set to OFF. 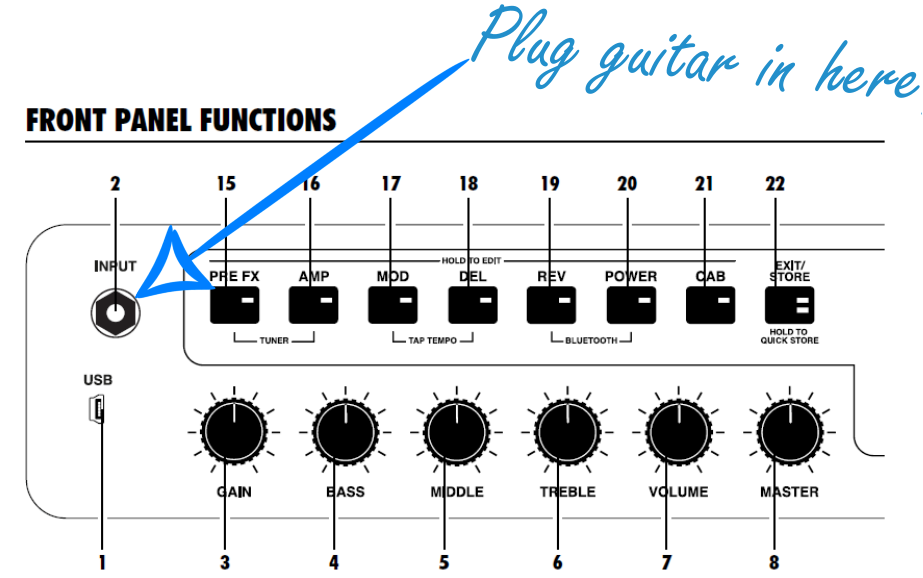 With an instrument cable, which isn't included in the purchase, plug your electric guitar into the INPUT jack on the CODE 50's front panel. 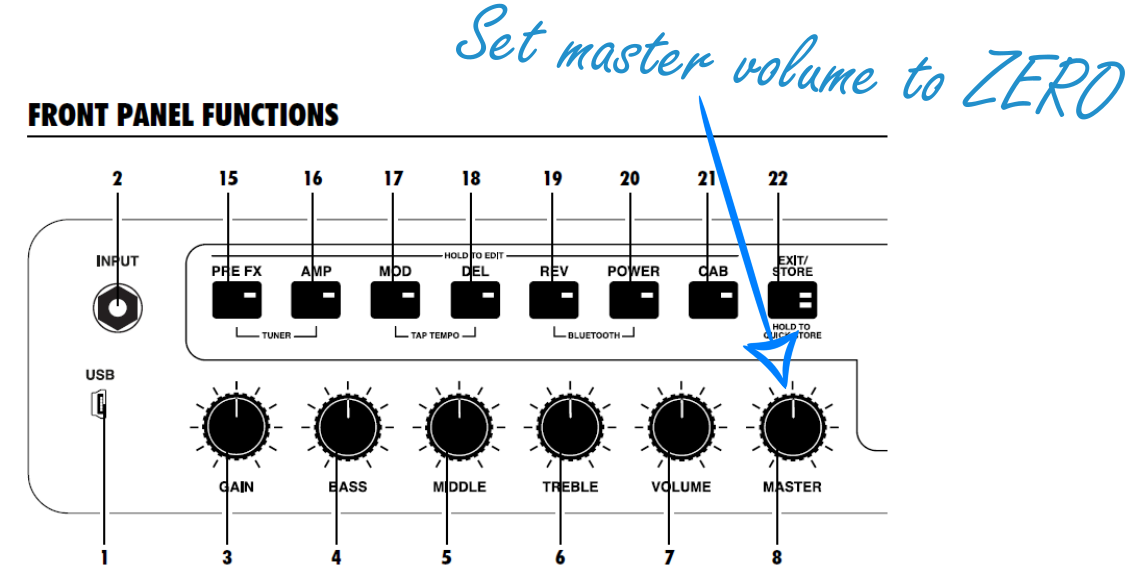 Set the MASTER volume to zero before turning the amplifier on.

4. Turn the amp on and gradually turn up MASTER volume 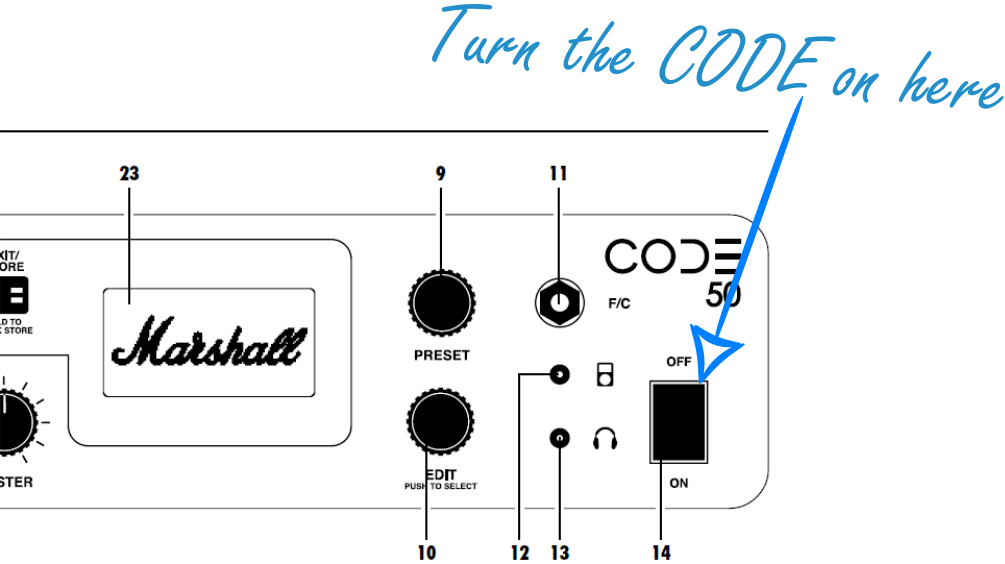 Use this button to turn the amp on and then gradually turn up the MASTER volume (we previously set to zero) until you reach a desirable volume level. 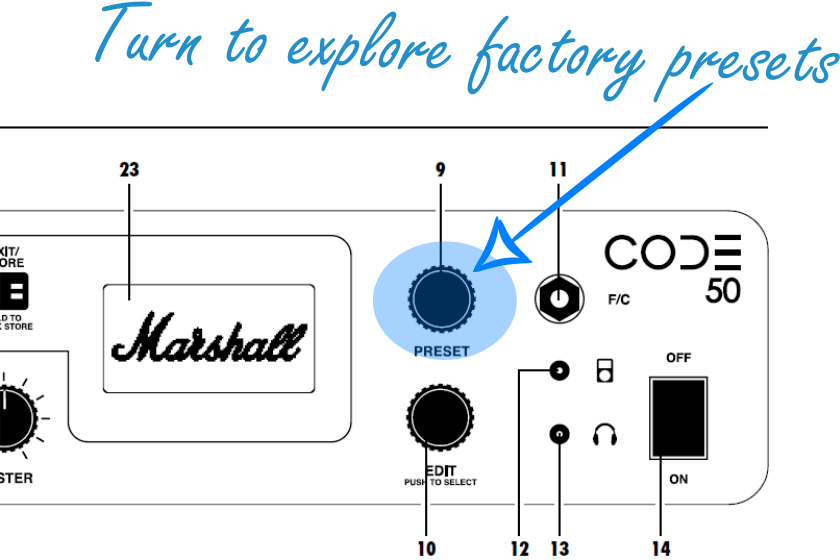 This preset knob will do most of the work for you if you just want to explore the sounds. Everything will be what Marshall setup as a factory preset, but it at least gives you an idea of the amp's capabilities.

How to Get Different Sounds out of the Marshall CODE 50

In this section we'll explore some of the basic processes for getting different sounds out of the Marshall CODE 50. We'll start with a dead simple clean sound, which is surprisingly easy to dial in.

How to get just a simple clean sound

Start at preset 00 for a basic clean tone.

The simplest way to start with a basic clean sound is to dial to PRESET 0, which is based on a simple Marshall clean tone. From a tone quality perspecitve, it's surprisingly good and doesn't really sound digitized at all. While it's not JCM800 level, it does a good job of emulating the bright, sparkling quality of a Marshall tube amp.

What if I want to edit and re-save the 00 preset? 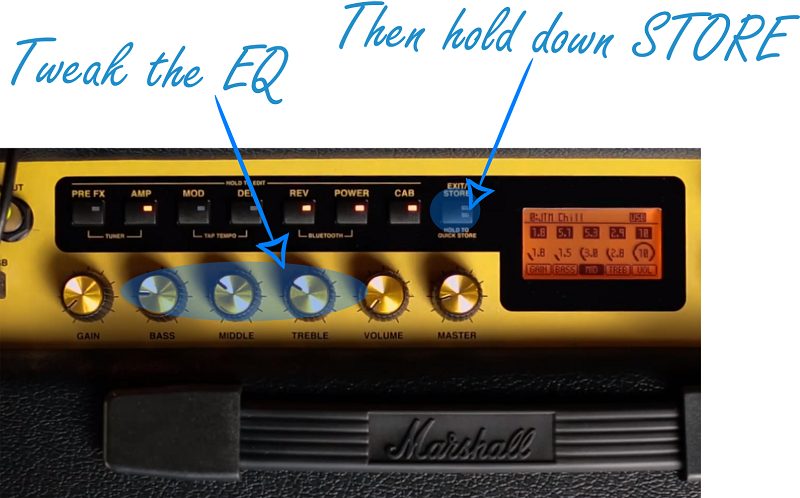 Tweak the preset to your liking, then hold down the STORE button to save it.

Once you've selected the 00 preset - or any other preset - you can easily tweak the EQ knobs (bass, treble, and mid) or any other controls, and then hold down the STORE button to quickly bank the preset.

How to get a classic rock distortion

Preset 03 titled "Purple Plexi" is sort of the CODE 50's default classic rock sound, which could serve as a rhythm or lead channel. Just as we saw with the clean sound, you can make tweaks to your liking and save them with the STORE button.

The guitar tuner function on the CODE 50 can be accessed by pressing the PRE FX and AMP buttons at the same time, per the following screenshot from the user manual:

Press the PRE FX and AMP button at the same time to access the tuner.

Connecting the CODE to Your Computer to Record 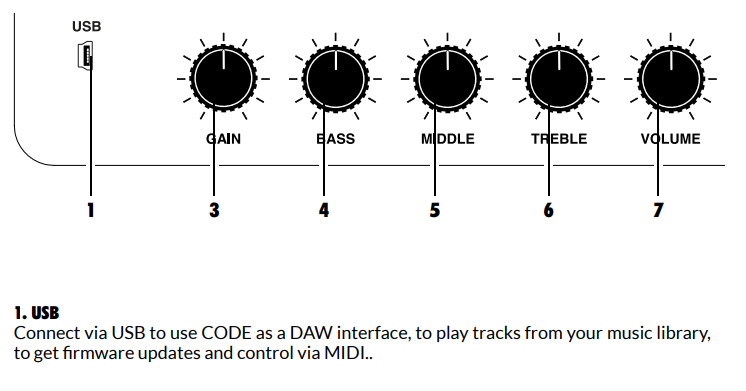 The USB connection on the left side of the amp allows you to connect the Marshall CODE to a computer.

The included USB cable can be used to connect the CODE 50 to a computer. Once you do, you can start recording by selecting the CODE as your "input source" through your recording software or DAW. It's an incredibly simple process and great for quick recording or even more serious studio projects.

Most modeling amps tend to be really strong in regards to their versatility, meaning they provide a lot of different options and varying sounds to play with.

What they're not known for is providing a high-quality base tone that can compete with the sound you get out of real tube amps.

While we wouldn't say the CODE 50 is as good as Marshall's tube options, it sounds appreciably similar. The algorithms built into the CODE's models and presets by Softube engineers are excellent and do a more than an admirable job of mimicking analog amplifiers in a distinctly modern flavor.

In particular, the Purple Plexi preset - the default clean tone I mentioned earlier - does a good job of capturing the brightness and chime that we get in vintage Marshall tube amps.

The clean tones of the Marshall CODE 50 are some of the best we've heard in a modeling amp.

Even the behavior of the sound reminds us of a tube amp. For example, playing heavy on your clean channel will give you a slight amount of bluesy breakup and distortion, just like you'd expect on a heavy tube amp.

Here are some other tone characteristics we noticed: 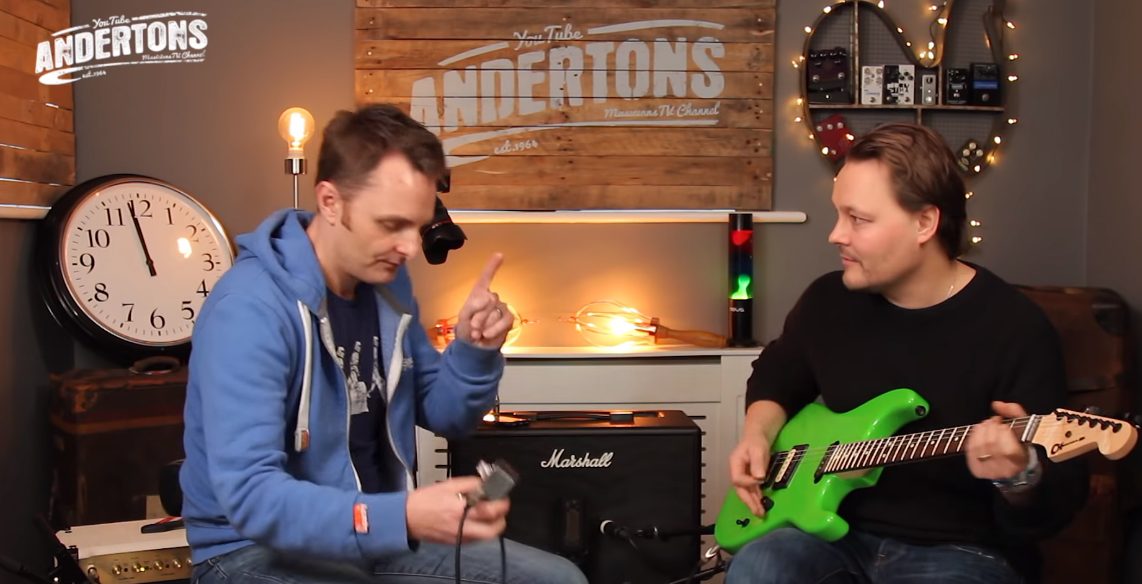 There's a massive amount of control at your fingertips in the Code 50, with or without the footswitch. Image via Andertons Music Co

The compatible footwswitch (that unfortunately is not included in your CODE 50 purchase) can control presets, effects usage, or channel switching.

There's also an app that's free to download that can control almost every aspect of the amplifier via a Bluetooth connection. Whenever you choose an amp model, you can customize any of the following aspects:

In other words, you could have one preamp variety paired with a different power amp and a completely different cab. When testing the CODE 50, we noticed that unconventional combinations tended to sound a bit ambiguous, which lead us to stick with more expected preamp and power amp combinations.

Still, it's a massive amount of versatility to work with, on top of the fact that the out-of-the-box tone is still really good. 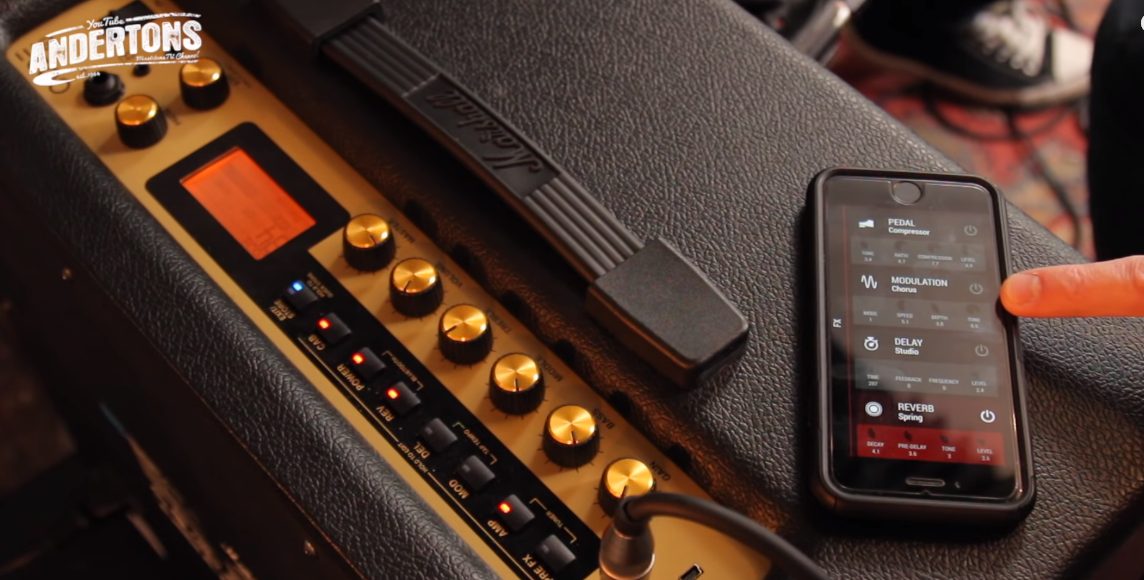 All of the 24 effects come with the expected controllable parameters.

With delay, for example, you can choose delay models, set the time, and set repeats from your phone or from the amp itself.

We noted that the effects seem like less of a priority for the CODE series than the amp models did. Because while the onboard effects do sound really good (similar to having a bunch of Boss pedals available to you), it seemed to make less of an impact than the wide range of amp models did.

Yet, the effects do sound really pristine and meld particularly well with the clean bluesier amp models.

Value of the Marshall Code 50

Currently, I just had to move a desk into a corner in our bedroom, which has made me want to grab one of these for the headphone playing and easy computer hook up. I'd say any guitar player wanting more digital options or to play without running a loud tube amp, should consider the Marshall CODE series.

In all likelihood it's going to be really good fit.

Marshall's home page for the Code series. Image via Marshall

I totally understand people's hesitation with solid state modeling amps. All the digital features and the "bells and whistles" seem to run counter-intuitive to the pure tube-driven tone many of us grew up with. But I'd be willing to say that the CODE series by Marshall represents a significant step towards a world where modeling amps are more reliable and "true" to the original sound and can be used in a wider range of contexts.

After playing one myself and writing this review, I want to buy one for my home, especially since I have small kids that go to sleep early.

In situations like that, the Code will get you a fantastic balance of digital convenience and tube-like sound quality.

Do you have questions about our Marshall CODE 50 review?

Are your curious about a different amp we didn't mention here? If so, leave a question in the comments section below and I'll answer there as best I can.