With two channels, all-tube Marshall circuits, and even some emulation features, the DSL series continues to produce some of the highest-value amps on the market, with the 20HR leading the way.

The DSL20HR is the follow up to Marshall's extremely popular 15H, continuing the DSL series.

New features in the 20HR (and others in the DSL series) include an effects loop, expanded EQ options, an emulated output, audio input and more wattage options.

The combination of functionality and a versatile tube-powered preamp/power amp give the DSL20 its appeal. You can get a smooth, vintage style distortion tone but you can also push the gain higher to get a modern, heavy distortion that's similar to the trademark sounds of the more expensive Marshall amp series.

Here's how I broke down the ratings for different sections:

In this chart we've used a weighted ratings system to give a detailed overview of the DSL20HR. In the "Quick Hits" section below, we've used a four simpler four-point rating system that gives broader numbers to four basic categories.

Use the ratings at your discretion, and keep in mind these are subjective, based on first-hand experience and individual research.

In the following section, we've listed the DSL20HR with a few comparable alternatives for easy browsing.

We support Guitar Chalk by linking to gear on Sweetwater at no extra cost to you. If you want to help us out, consider shopping through these orange buttons. This helps keep us going and allows us to continue making gear and lesson content freely available.

For those wanting a sound sample, this video review does a nice job of highlighting the DSL20HR's clean and distorted tones without a lot of talking.

Below are a few stock images of the Marshall DSL, which are pulled directly from Marshall's website.

IDEAL FOR: Those who already have a speaker cab they like, modern and vintage rock, basic gigging, and recording

Curation of reviews from Sweetwater, Reverb, and Musicians Friend

Both channels have their own volume and gain knobs, allowing you to customize gain levels and overall output for each individual channel.

We'll break down our review between the clean and dirty channel since they both have their own unique sound.

Note that the clean channel on the DSL20HR is labeled "Classic Gain" while the dirty channel is labeled "Ultra Gain."

The clean tone is brisk, with a little breakup on higher volume levels. It's more reactive to your picking then what we're used to, especially when you compare to Mesa Boogie tube amps. 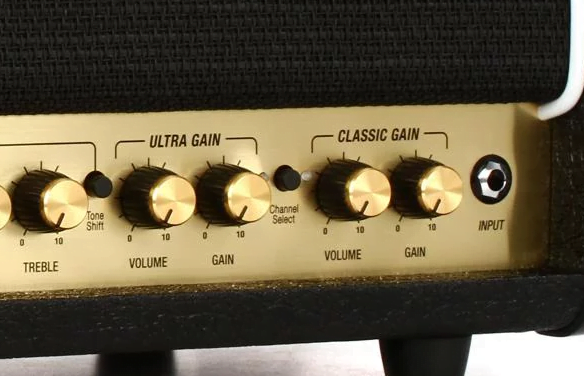 Volume and gain controls for both channels.

Though it's what you would expect from a classic Marshall amp tone. On the clean channel you get a lot of brightness and a sheen that seems to ring off higher notes, making the clean channel a good fit for lead guitar and melody lines, even without distortion.

We do miss some of the warmth that you have with other non-Marshall tube amps, but the briskness is something that vintage Marshall fans will appreciate.

Cutting back resonance, treble, and presence can take some of the bite out if you find the clean channel too harsh.

On the Ultra Gain channel you can dial in a fuller and thicker tone, with heavy layers of distortion and a warmer tone profile that brings out more of the tube vibe. Though even with the heavier settings, you still hear a lot of the Marshall tonal signatures coming through the saturation.

Notes can sound distorted but aren't covered or without form.

As I mentioned earlier, the walk from low gain to high gain gets you from classic/vintage distortion to a more modern, almost metal distortion sounds.

While it certainly doesn't compete with monster gain amps like Mesa or the Diezel series, it's a great modern sound, given the price point and the typical vintage lean of the Marshall brand.

Palm mutes sound thick and punchy while power chords have a warm layer of distortion that rings with plenty of sustain. It's still bright, but also more percussive than we would have expected. Marshall has done a great job of getting you a lot of gain to work with while still preserving the originality of the Marshall tone and the classic appeal of the brand.

Otherwise, we're just going to cover the differences in the control scheme between the two stages of amplification in the 20HR:

Marshall installs a basic three-band EQ on the preamp and the aforementioned volume/gain controls, one for each channel. 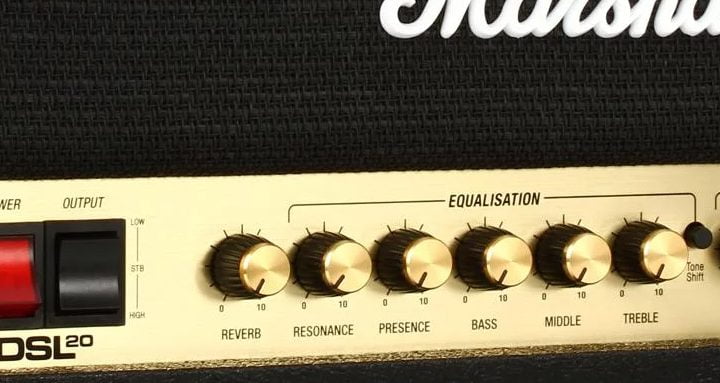 Note that equalization on the preamp is universal and can't be adjusted between channels, outside of the volume and gain knobs.

At the power amp, you have reverb, resonance, and presence.

Again, these controls are universal and are not changed when the channel changes.

Cost/Value of the Marshall DSL20HR

One of the reasons we like the DSL series so much is the price point. In recent years it has hovered between $400 and $500, with used options dipping lower depending on where you look.

Here's a chart from Reverb that tracks the used pricing for the DSL20HR:

Pricing and transaction history for the Marshall DSL20HR on Reverb.

If you want the latest data, checkout the DSL20HR entry on Reverb.

Whether you buy new or used, we'd consider all of the Marshall DSL series options to be extremely high value. That would include the 40 series and the combo versions, which you can usually find listed with the DSL20HR.

You get the vibe and feel of far more expensive Marshall amps, yet without the $2000 price tag.

However, it maintains the same flavor of the classic, more expensive options.

With the added functionality, the affordability of the series makes it an easy top choice, especially if you're looking specifically for cheap tube amps.

The Marshall DSL20HR's expansion over its predecessor gives it a lot of added value and use, particularly for live gigging, practice, and recording.

An effects loop, MP3 input, high-quality onboard distortion and the existing tube circuitry give you the feel of more expensive Marshall amps with some commonly sought after practice features that are often reserved for cheaper models.

While it's most at home as a practice and lite gigging companion, the 20HR can work in just about any performance or recording situation.

Just keep in mind: If you buy the head version (the one we've reviewed here), you'll need a speaker cab.

In this section we've answered a few frequently asked questions about the DSL amp series, and specifically the 20HR. If you have additional questions, feel free to drop those in the comments section below.

Is it a good fit for metal?

The DSL series is modeled after the more vintage Marshall tube amps, but we've always liked it because it can sound very modern and percussive. This means it can hang in metal styles, but probably wouldn't be my first choice if you're looking for a truly metal-friendly amplifier.

Does it make a good bedroom amp?

The only knock against the DSL series for bedroom jamming is that it doesn't have a headphone jack. We'd probably recommend a smaller solid state amp if you're planning for mostly indoor practice.

Is it good for recording?

We'd definitely recommend the DLS20HR for recording because it has an emulated output on the back of the amplifier, for that exact purpose. Remember, you still need to have a speaker cab connected. Don't run a tube amp without a speaker cab or a loadbox.

Speaker-emulated line out can be used for recording.

For a long time now, the DSL series from Marshall has been one of our top guitar amp recommendations and continues here without skipping a beat. In terms of quality and price converging, it's a fantastic value, even if you're getting just the head version and then having to add a cabinet.

While it's true you're not going to get any kind of digital modeling or effects, that's not unusual for a good tube amp.

In this scenario, we'd advise letting your pedalboard do the effects work and using the Marshall to provide a reliable base of tone. Also, the dirty channel should largely account for your distortion needs, regardless of your stylistic lean.

It can do vintage and modern with pretty much equal efficiency.

If you still have questions about the DSL20HR or our review process, feel free to leave those in the comments section below and we'll be happy to chat.