QUICK HIT: Looking at Metallica amp settings and how you can dial in a similar tone with whatever gear you might be using.

In this article, I'm going to look at how to dial in the optimal Metallica amp settings, focusing primarily on James Hetfield, as opposed to Kirk Hammett. As the token rhythm guitarist, Hetfield handles almost all of the bedrock riffs and chord progression that make up the band's core tone. Hammett's sound is similar, but when you're looking at Metallica's sound broadly, what Hammet does on his own is not enough.

To get Hetfield's tone right, we do need to understand that there is a "gear factor" to consider. For example, Hetfield uses a model of a Diezel VH4 amp head. On a good day, you could get one of these for about $4000. To say that a $400 amp can sound the same is entirely untrue.

They're priced differently for a reason.

This means that we need to look at Metallica's sound broadly and how we can optimize our own rig to mimic what most characterizes their sound. For Metallica, here are a few things I would aim for: 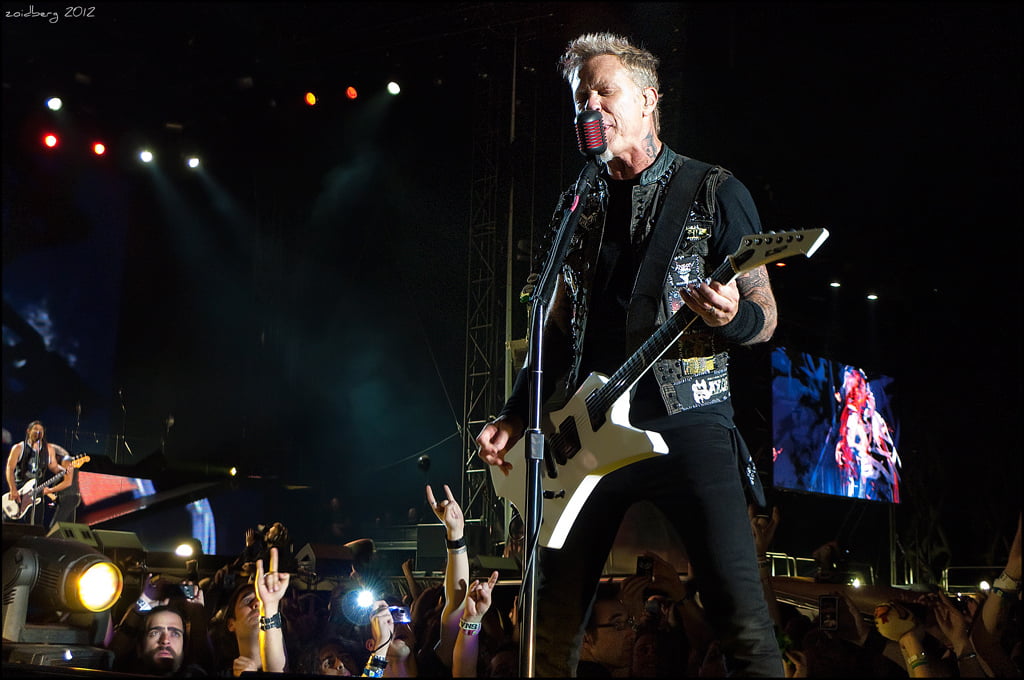 The Metallica sound is all about high gain and heavy power riffs. Flickr Commons Image via Dr Zoidberg

Hetfield's entire rig is centered around high gain and heavy distortion, with plenty of low-end, sustain, and rhythmic, percussive response from his guitar. These are some of the best practices we need to aim for, regardless of the gear we have available to work with.

As a consequence of these characteristics, Metallica amp settings will hinge almost entirely on distortion and dirty channels. Per Hetfield's guitar tech, those sounds come from a combination of the VH4 and Mesa Boogie amplifiers, with no additional help.

Not only that, but these amps are actually modeled in multiple Fractal Audio Systems Axe-FX II units, which are then pushed into Matrix solid state power amps, meaning everything is digitized and very expensive. 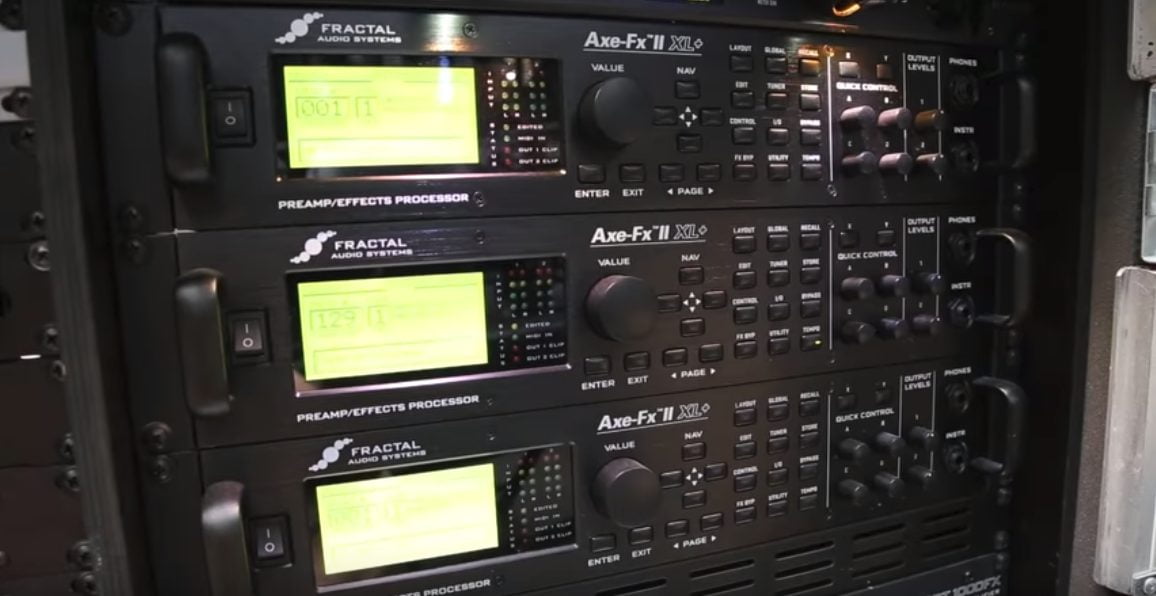 Hetfield uses Axe-FX II units for two different heavy sounds, modeled after the Diezel VH4 and Mesa Rectifiers, along with a third unit for his clean tone. Image via Metallica TV 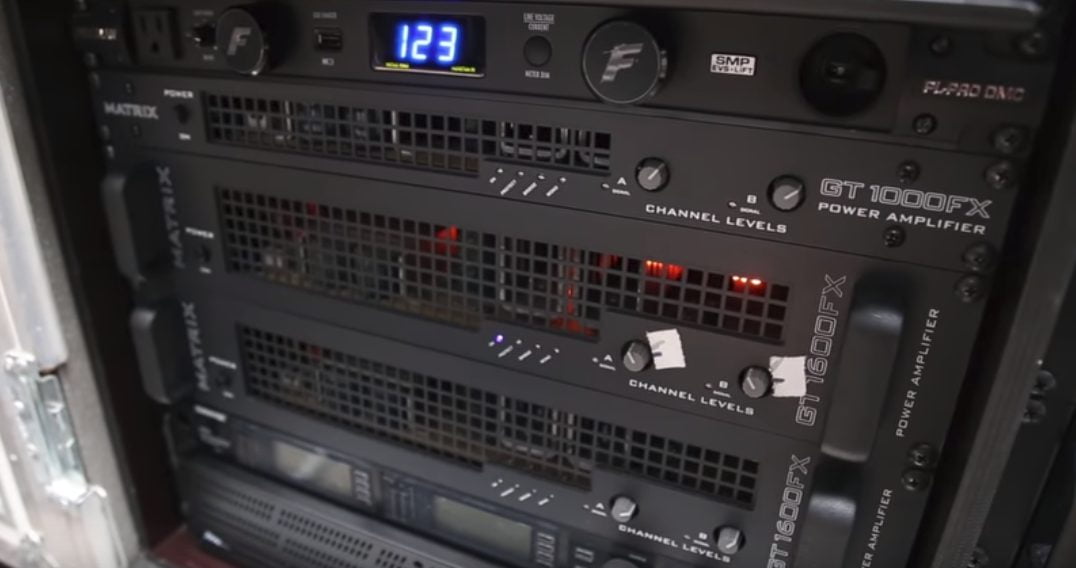 Getting your hands on this type of gear would easily push you into a five-figure investment, which is not worth it just to cover a few Metallica songs. Instead, go back to your best practices and note that we're really just looking for bass, sustain, and high gain levels.

With that in mind here are a couple far more affordable alternatives that will give you those three things, while still maintaining a high degree of quality. 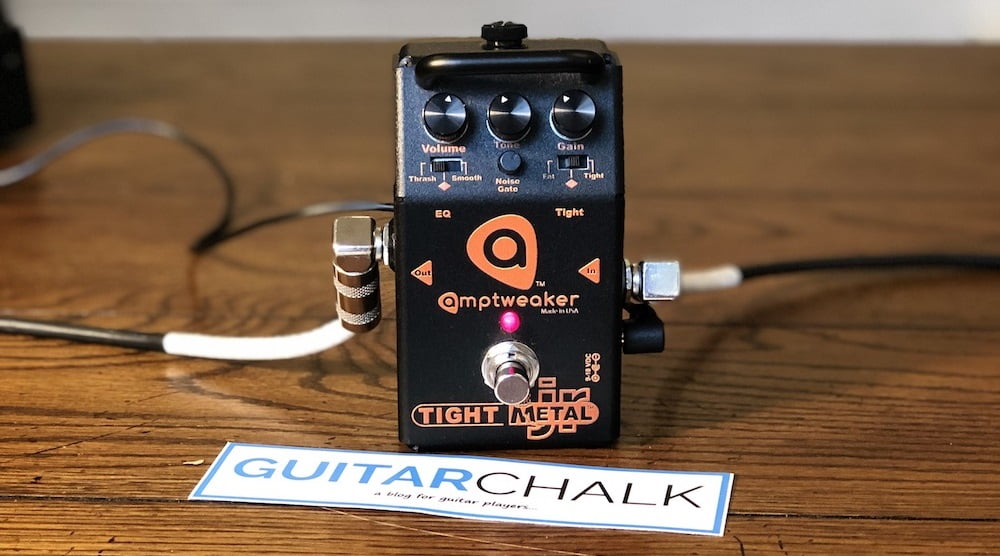 The AmpTweaker Tight Metal JR distortion pedal is a great option for getting a Metallica-sounding distortion at a far more affordable price tag.

Want to compare these to something else? Hit the compare button to use our bar, or use this product search to see what other amps and pedals we have in our database:

The AmpTweaker Tight Metal JR is a modern-sounding distortion that has tons of low-end, plenty of sustain, and high gain levels that don't sound too chaotic or cheap. It's also powerful enough to function as its own preamp. This is a great way to go after Metallica's tone, with or without a physical amplifier. 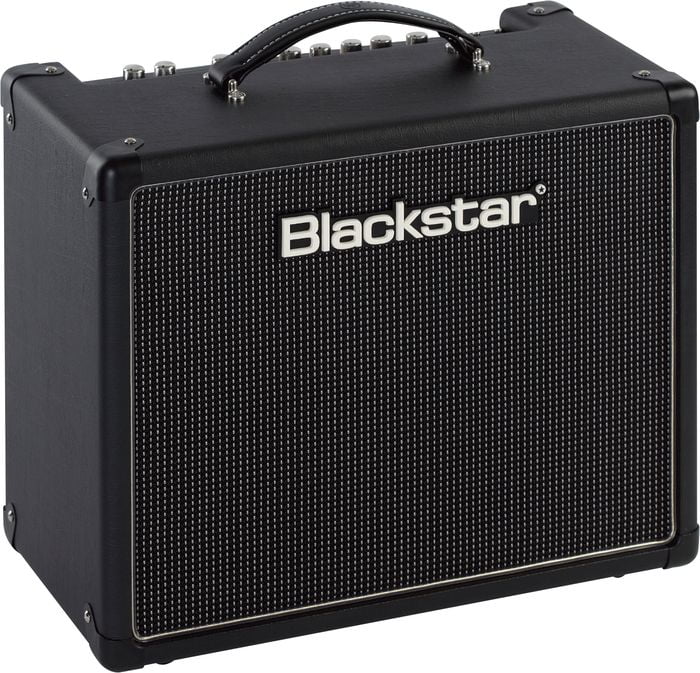 Blackstar amps have a fantastic onboard distortion that's also tube-powered (like Hetfield's Mesas and VH4).

The HT-1, 1R, 5 and 5R are all amps that I like and recommend for their onboard distortion. They're tube-powered, which gives them that heavier, percussive sound, while also having a smooth, modern sustain and ring. They're also not super-expensive, hovering in the $300 to $500 area in most markets.

Again, none of this is to say that you can get a tone that matches the quality achieved by the talent of Hetfield and the quality of a Diezel/Mesa combination. However, if you have something that can produce some of the same characteristics, we can then look at some amp settings and basic EQ strategies that will get us close to Metallica's sound.

Since all of the effects, amps, cabs, and dials are stored in the Axe-FX II systems, it's hard to determine exactly what they're doing in terms of a three-band EQ for each amp model. However, we can take our best practices list from earlier and get close to something that will highlight those characteristics in our tone.

Here's a good starting spot for the heavy, distorted sound:

High gain levels, whether coming from a pedal or amp, get you the distorted, saturated sound that Metallica is known for. It should also get you a lot of sustain and a little bit of feedback if you get close enough to the amp (or speaker cab). From there, I would advise using an EQ that favors the low end, which is why I've kept treble fairly low in both the amp and pedal recommendations.

Use these recommendations as starting points and tweak as needed, depending on how your gear is setup.

If I can ever get some more insight into what exactly is programmed into the Fractal Axe-FX units that James uses, I'll update this article, hopefully with some actual screenshots of the presets. By the same token, if anyone has information on how those are setup and what kind of EQ is stored for each amp, please feel free to leave a note in the comments section below and I'll take a look.

Other questions about the gear Metallica uses or the alternatives I've recommended are welcome there as well.