Though Epiphone parts don't vary much between models within their Les Paul lineup, the '50s Standard model gives you a ton of great value and an experience that's aesthetically and functionally similar to the Gibson's version of the Les Paul standard.

While this analysis could apply loosely to both, we're specifically focusing on the '50s Standard, which is one of the models we recommended in our best Epiphone Les Paul roundup article. This is a guitar that we've also had the opportunity to test in-house and have done extensive research with.

In this section we've put in some compare buttons with some similar electric guitars so you can look at basic pricing and specs. If you have additional questions that we don't answer in the review, feel free to drop those in the comments section below.

Ratings Card for the LP Standard

In this section we've built a quick-reference ratings card that's helpful for people who don't want to read the full review. We've highlighted the ideal context and situation for the Epiphone Les Paul Standard, and also provided some basic ratings along with pros and cons.

IDEAL FOR: Classic rock or blues fans who want a versatile guitar at a steep discount. 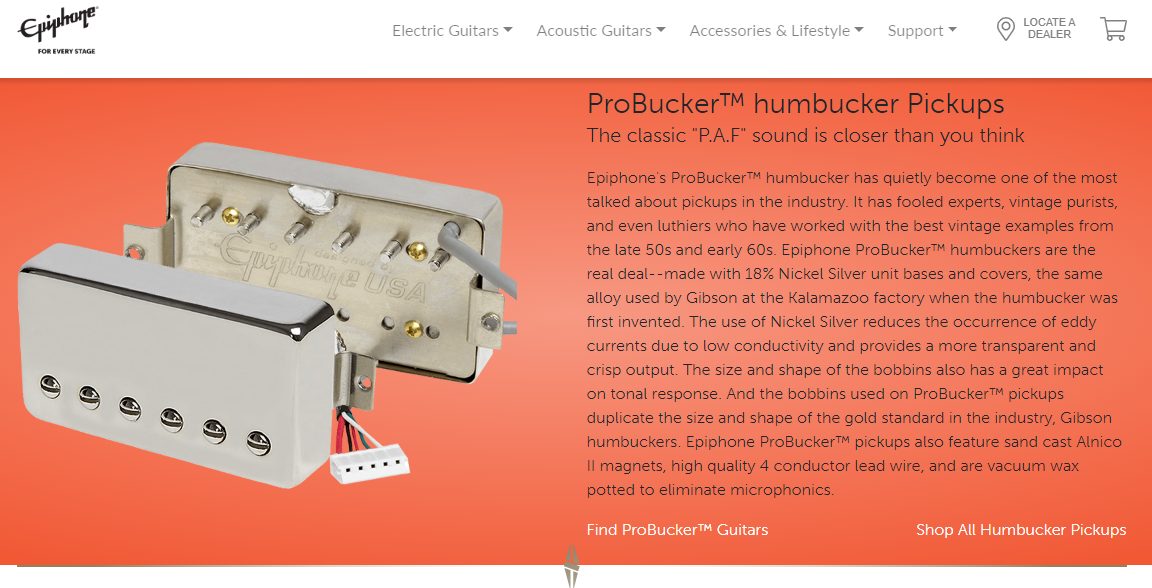 Every Epiphone Les Paul these days has a variation of this pickup, the ProBucker.

Since Epiphone went through the trouble of trademarking the ProBucker (thus giving it the distinctive name), it's safe to assume the three variations - ProBucker 1, 2, and 3 - have gotten more creative attention than the average "stock" humbucker from Epiphone. They're designed to mimic the far more expensive Gibson BurstBucker and 57 Classic, pictured below for direct sale on Gibson's website: 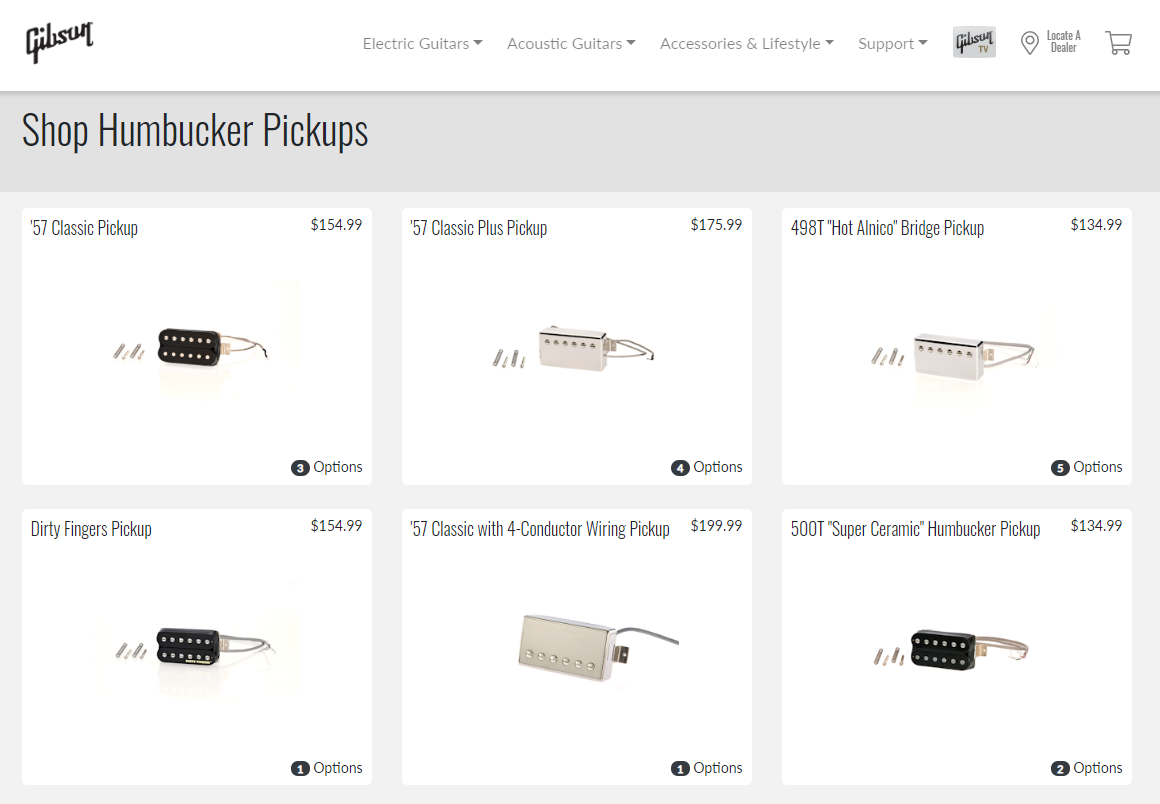 Gibson pickups are a good deal more expensive than the Epiphone ProBuckers.

Regarding tone, the Epiphone ProBuckers are most likely designed to mimic the '57 Classic. They're both a P.A.F. style pickup with four-conductor wiring, and seem to have a similar response in other tests we've done.

The ProBuckers certainly aren't overly aggressive or loud. They're medium output, with a bell-like tone that produces a decent amount of sustain. Even without a ton of gain, the pickups have a sweetness and ring to them that's characteristic of the Les Paul body design. Even while taking some obvious manufacturing shortcuts, Epiphone managed to get a lot of Gibson's vibe into these pickups.

While there are still plenty of good options for swapping the ProBuckers with something from a third-party brand, the Epiphone ProBuckers are clearly a step above the typical "stock" pickup with a hard cover. For the price, they'll get you a decent tone out of the box.

Most of the Epiphone guitars (almost all of the Les Pauls) are made with a Mahogany body, which is a fairly common and reliable tonewood. The Standard has a Maple veneer covering the top of the body, which also covers up the three Mahogany joints. The cream-colored binder on the body's perimeter does a nice job of bringing the look of the body together.

It's not quite as heavy as a Gibson Les Paul, but the Standard's body definitely weighs down to the right side, which makes the headstock and fretboard want to sit up higher. For people who aren't used to the Les Body body design, the weight distribution can take some getting used to.

The Maple top - sometimes called a "cap" - I mentioned earlier is carved to mimic the real Les Paul body contour, and looks incredibly close to the vintage Gibson Les Paul models. The body, from an aesthetics perspective, isn't noticeably different than a legitmate Gibson rendition.

There are typically five different finishes the Les Paul Standard comes in. The one we tested is the one pictured, called the "Bourbon burst" which has gloss material over it and looses a little bit of its photogenic luster in person. Here's a shot of the other finishes available on Sweetwater: 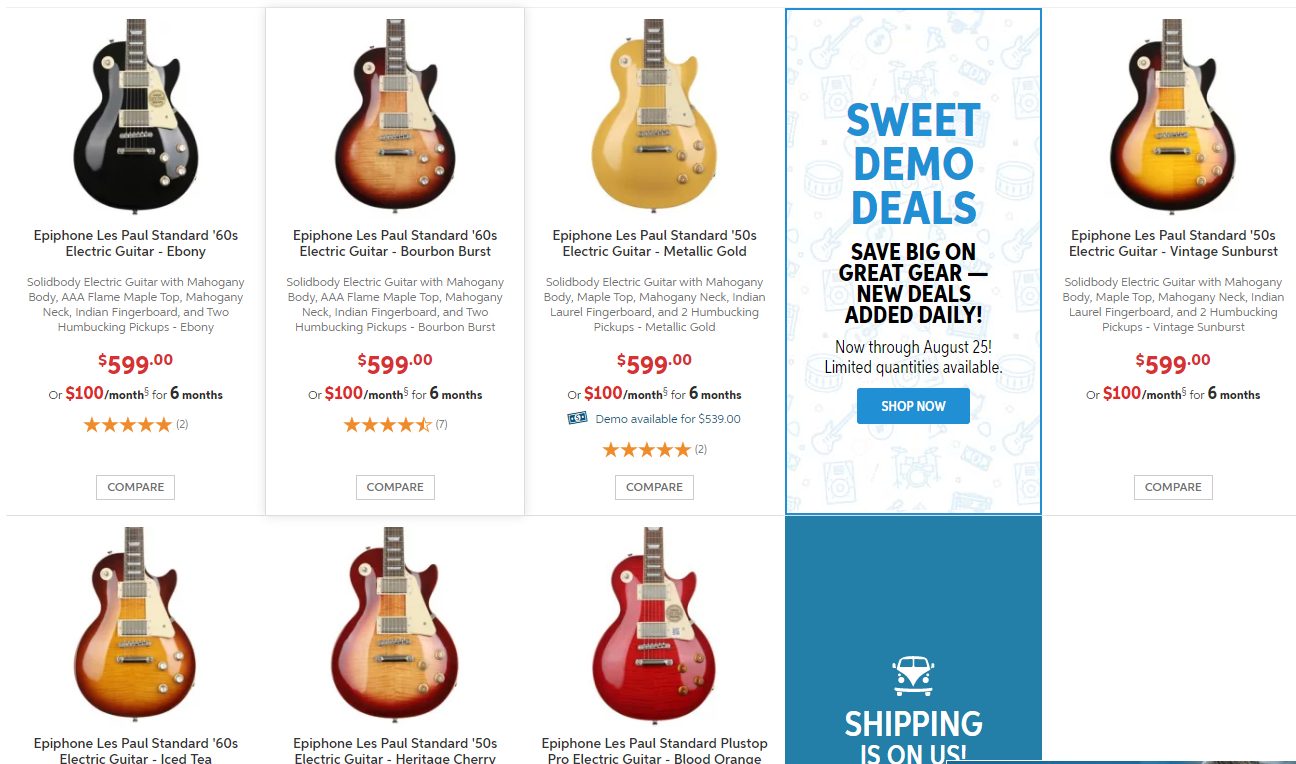 Though the finishes in-person show a little "cheaper" than the Gibsons, it's still an extremely attractive design where the gloss does a good job adding a distinct shine to the guitar. It's especially attractive in a well-lit room where light can reflect off the guitar's body.

Assuming you buy one brand new, most iterations of the Epiphone Les Paul Standard have been released for around $600. This is pretty typical for a mid to high-end Epiphone model and certainly beats the $2000 (or more) you would spend to get the Gibson Les Paul Standard. 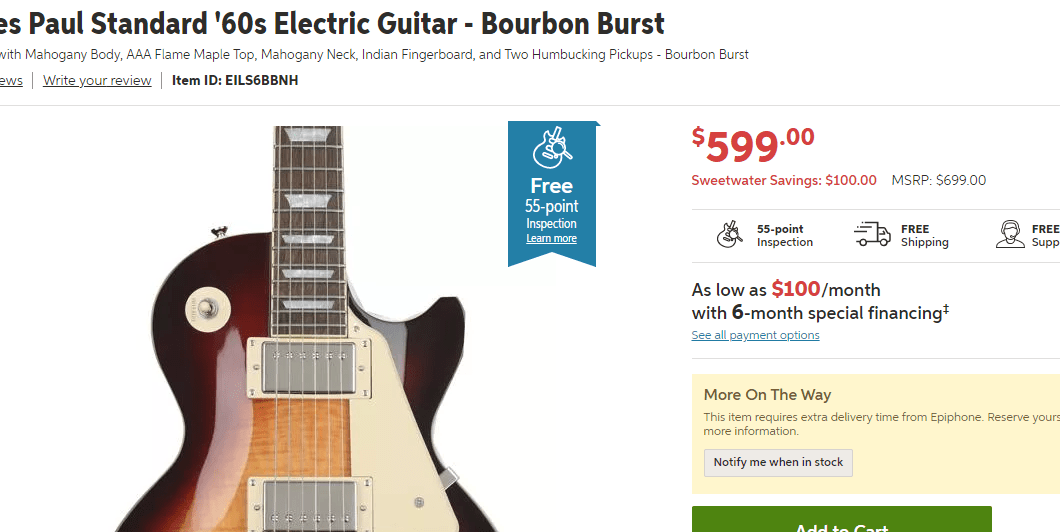 $600 is a pretty typical retail spot.

The Epiphone Les Paul Standard's main attraction is the price tag, making it a great fit for beginners or even intermediate players that want the look and feel of a Gibson Les Paul without the scary price tag. And while it's true that Epiphone has taken a lot of necessary shortcuts to keep the price down, they've also done a good job of capturing the iconic aesthetics of Les Paul's original design.

You get a tone and sound that's decently close to the original. We'd recommend it to people who want a vintage-voiced guitar with some versatility and a bright clean tone. For the price, it's a safe bet in a lot of situations that call for a restricted guitar budget.

Do you have questions about the Epiphone Les Paul Standard or our review process? If so, feel free to leave them in the comments section below and I'll do my best to help out.

A Complete Review of the Epiphone Les Paul Custom

Written by Bobby on Electrics and Reviews

A Complete Review of the Epiphone Les Paul Custom