QUICK HIT: Digging into some Stevie Ray Vaughan's rig setup and how the legendary guitarist crafted some of the purest blues tones of all time.

Stevie Ray Vaughan's tone was heavy and aggressive, yet also bluesy and subtle, with what always seemed to be the perfect amount of gain for what he was playing. If you watch videos of him performing, a lot of the gain adjustments he made were directly from the guitar, switching pickups or rolling back his volume knob.

In this article we're going to look at some of Stevie Ray Vaughan's most common amp settings and some of the gear you can use to get decently close to his rig and tone profile.

Obviously we're not recommending you go out and copy his rig item for item (that would be insanely expensive), but we'll help you get close, based on his conventional sound and setup. 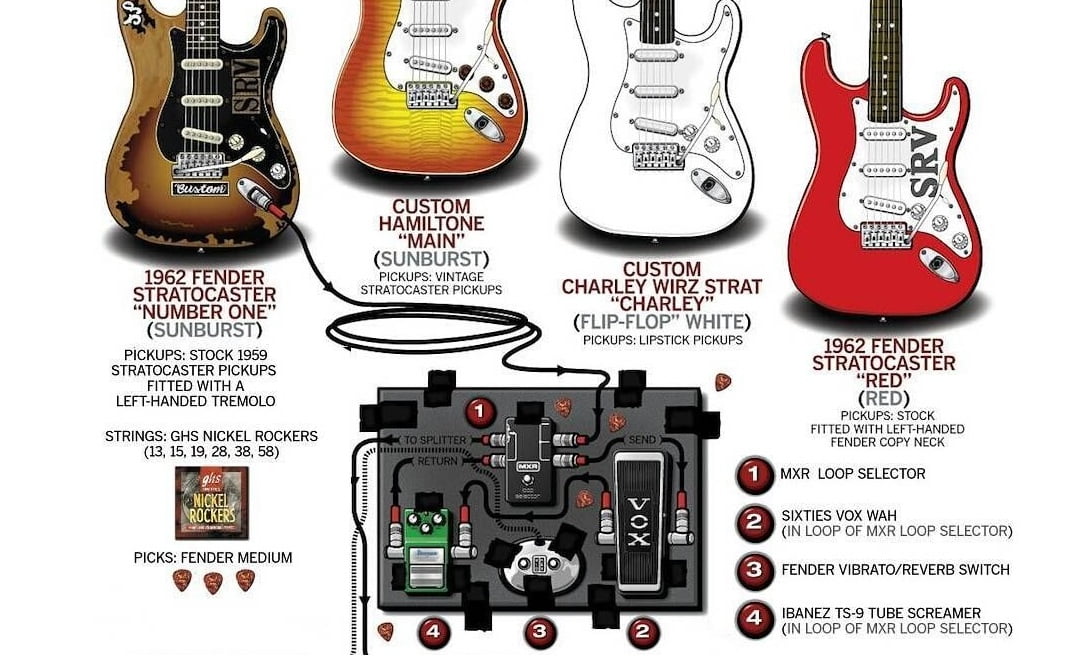 Stevie Ray Vaughan's pedalboard and guitar lineup from the 1980s

Fender tube amps were Vaughan's go-to method of amplification, and he almost always played a Fender Stratocaster, which eventually became a Fender Signature Strat. While you definitely don't need the SRV signature guitar, we would recommend the Ibanez TS9 Tube Screamer and a VOX wah wah pedal, both of which Vaughan used extensively.

For an amplifier, a Fender tube amp is most ideal, but you can try these settings with other amps too.

We've pulled these settings from the Positive Grid mobile app. We're not an affiliate of their's but it's just a great app that we use often.

While Vaughan didn't play completely clean very often, his style was somewhat subtle and nuanced which often led to less gain and a cleaner tone quality. If the above settings feel too "messy" for a clean tone, back down the volume knob on your guitar to get a smoother, bluesier gain level.

You can also just drop the gain level on your amplifier.

If your gain is coming from the TS9, just leave it off or on a really low gain setting.

Again, if you're using a distortion pedal like the TS9, adjust the gain setting there instead of your amplifier. The treble stays high, which helps to get the "snap" and "pluck" that you hear in SRV's picking dynamics.

If it sounds too bright, try and correct it from your guitar first. Use a middle or neck pickup position and/or roll the tone knob back to smooth things out, if needed.

More than amp settings and gear choice, a lot of the way Stevie Ray Vaughan sounded was a result of how he played and not simply what he played.

It's safe to say that those two guitarists do not sound the same.

Some of the technique that helped craft Stevie Ray Vaughan's signature sound included the following:

If you work these techniques and qualities into your playing style, you'll do a better job of achieving his sound. It's perhaps even more important than getting the right gear and amp settings.

This is a really old video of a friend of mine, Cesar Huesca, covering "Little Wing" by Stevie Ray Vaughan, but it's a great example of implementing these concepts.

At this point we've established a baseline, a place where you can start pursuing a tone similar to Stevie Ray Vaughan. If the settings I've listed don't sound right, use them as a template and make changes based on what you know about your rig. For example, you might have an amp with a naturally less intense gain profile, which means for SRV's distorted tone, you might have to push the gain a little higher than what I recommended.

Or maybe your pickups are just brighter and too shrill for such a high treble level. If so, just cut the treble back to compensate.

The idea is to start somewhere and then tweak as you go.

These templates will give you that starting point.

If you still have questions about the settings I've listed or perhaps an issue you're encountering that I didn't address, feel free to leave me a note in the comments section below and I'll respond there.

All About the Guitar Jimi Hendrix Played in the ’60s

Written by Bobby on Gear and Info

All About the Guitar Jimi Hendrix Played in the ’60s