Editor's note about this product

Make sure to keep in mind that while Traveler Guitar does make travel guitars specifically, the Redlands is a full 3/4 body size concert acoustic and not necessarily a guitar designed specifically for travel. It can be a good fit in many other contexts.

With a solid wood top that you get in more expensive guitars, the Redlands Mahogany tonewood projects really nicely, giving you a 3/4 size guitar that isn't just for travel. The natural tone it achieves is incredibly good and effectively captured by the piezo pickup and preamp system.

One of the nicest things about the Traveler Guitar Redlands is that it just feels really easy to hold and to play. I've always avoided full size dreadnoughts because they're way too big. But even my full size concert acoustic just feels like a lot of guitar, especially when I'm used to electrics.

So first, I want to recommend this acoustic for players who also play a lot of electric guitar.

It makes for a smoother transition between the two.

With the 3/4 size body and concert shape, it's extremely easy to play. 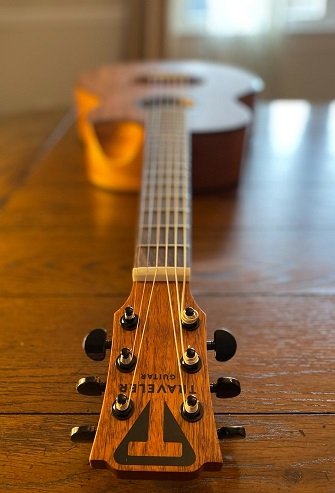 Headstock of the Redlands acoustic.

With the help of the solid Mahogany, this guitar sounds incredibly good and competes with acoustics I've tested that are close to the $1000 mark (see pricing below). The Redlands has an in-house preamp that faithfully captures the natural resonance of the instrument, giving you a pleasantly organic sound when plugged into a PA or acoustic amp.

When I tested the Redlands (on both), I did not have to do much in the way of EQ. It's a very good out-of-the-box guitar.

We'll get into the rest of my experience with this guitar and the full Traveler Guitar Redlands review below.

This review has been conducted with the Redlands acoustic in-hand, with actual testing in our office. We do not use third party article services or ghost writing. Content is written by guitar players, guaranteed. We also use the orange Sweetwater buttons to support ourselves, yet at no extra cost to you. 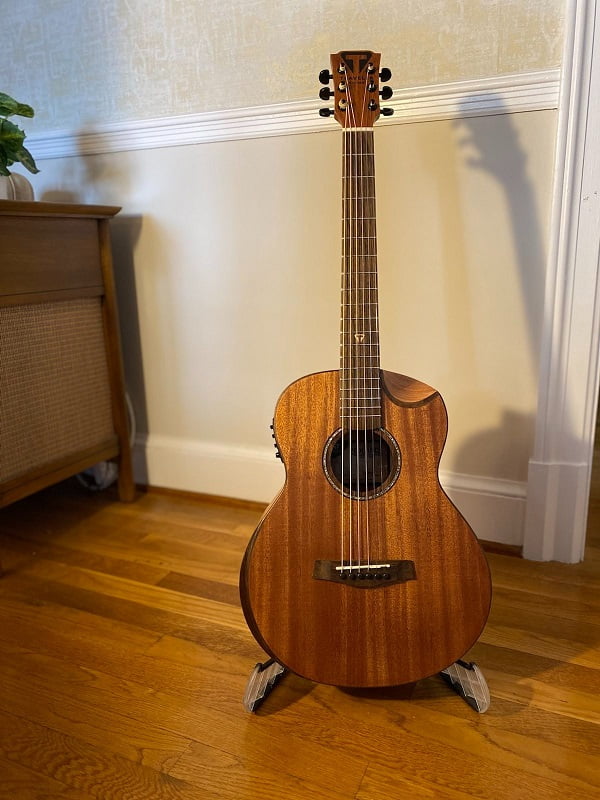 One of the Traveler Guitar Redlands' biggest strengths is how easy it is to hold and play. It's a breath of fresh after being used to much larger acoustics.

This section contains pricing tables, a price drop alert sign up, and a price history graph for the Redlands acoustic. If you want to be notified when the price goes down, sign up via email. Also note that if the price graph only has one bullet point, that simply means the product's price hasn't changed since putting up these tables.

IDEAL FOR: Electric guitar players that want a comfortable acoustic guitar, basic live performing. Great for church and a good follow up to your beginner acoustic guitar.

Tone Profile of the Redlands

I'll reiterate Danielle's note at the top of our review: This is not a traveler acoustic. It is not designed for transport specifically, though it does travel well. Instead it's a complete 3/4 body size concert acoustic, in the same vein as the Martin LXK2.

Given that fact, you'll get a much better tone out of the Redlands than you would an actual travel guitar.

It's similar to other 3/4 acoustics we've tested.

Here are a few qualities I noticed:

You're not going to get the full and warm sound of a Martin dreadnought, but I also found that when plugged in, I could EQ pretty much whatever sound I wanted. I tested it with a Bose S1 Pro and one of the Blackstar Sonnet acoustic amps, and the Redlands handled pretty much whatever I EQ'd into those systems.

In particular, digital reverb sounds really good with this guitar.

So I'm not going to complain about the tone not being warm enough. With Elixir strings it did mellow out and felt like a guitar I could strum on or pick through a lead pattern.

Plugged in VS Open Air

The difference between the amplified tone and the open air non-plugged in sound was pretty hard to distinguish. Even on a couple recordings I did, they sounded incredibly similar.

A big part of that is definitely the piezo pickup that's positioned under the saddle.

I don't have a ton of experience with those, but this was definitely a positive one.

So I was surprised with the quality of the preamp. I'm never particularly excited to see a house-brand preamp (it usually means some kind of stock). And while I would still rather see something from Fishman or LR Baggs, the Traveler Guitar electronics did a surprisingly decent job. 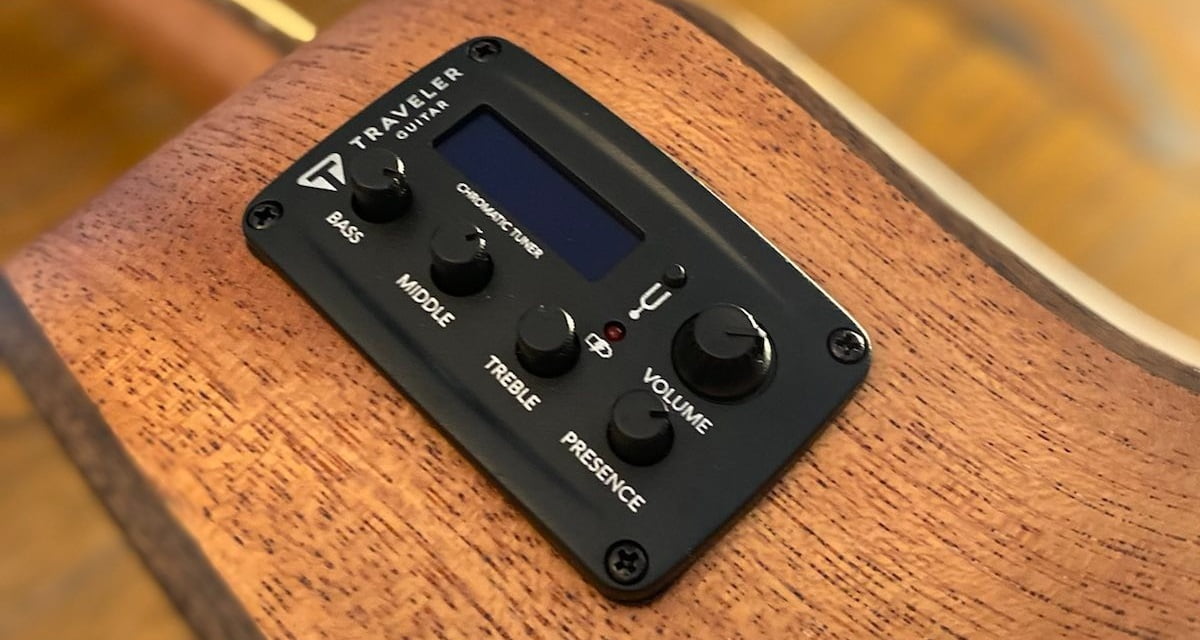 Between an impressive preamp and a piezo (under the saddle) pickup, the Redlands captures the natural tone in an amplified environment a lot better than I expected.

In this category, I want to be fair and accurate so I'll point out a few things I don't like (and of course, some that I do).

First, there is only one hook for a strap which is on the side of the guitar's body, right where you plug in your instrument cable. Pretty typical. But on the upper bout, there's nowhere to hook the other end of the strap.

I know that a lot of people just use the string around the headstock method, but I've always hated that. I'm just not at all used to it.

Maybe that's typical for these smaller guitars? I didn't think that was the case, but maybe I'm just behind the gun on the norms for a 3/4 acoustic.

I changed the strings to acoustic Elixirs, just because I always use those and I'm not crazy about the D 'Addario acoustic strings that the Redlands shipped with.

And while there weren't any problems tuning the guitar, I did feel like the tuning machines just weren't as strong as others I had used. They didn't move or loosen and the guitar stays in tune, but I didn't like how the tuners felt in my hand.

Still, there was no real fallout from this. It was just something I noticed as an area that I'd like to see improved.

Controls on the preamp

Okay, back to the good stuff.

Despite a smaller preamp that suits the guitar's body size, you have a four-band EQ that includes bass, mids, treble, and presence. You also have a chromatic tuner and an overall output control (volume knob).

This is a lot of functionality for such a small preamp. We even like it better than the ES2 systems in most Taylors, from a pure functionality perspective.

Traveler guitar deserves some props for this.

Traveler guitar's venture into more conventional acoustics (and even electrics) has led them to produce some higher-end guitars, which wasn't their original market. And while the Redlands is roughly in the middle of that range, it gives you a lot of quality for what you pay.

Remember to check the pricing tables above for an updated number. I won't mention it here because it can easily change.

Adding a solid top (either the Spruce or Mahogany versions use a solid top) puts the icing on the cake for me.

Perhaps with the exception of the tuning machines, there's just nowhere I can find on this guitar where they totally phoned in the show on quality. That said, a cheaper guitar will always sacrifice in certain areas to meet a particular price point. But in this guitar they've managed to keep manufacturing costs pretty low and to keep all the most important features well-funded.

Without a solid top, I might fuss about the price a little bit, but even then it would still be a decent value.

There are plenty of situations where this acoustic can be really effective. Personally, I've used it at church and was really happy with how easy it was to play standing up, much easier than a full concert acoustic.

Some other situations where I'd recommend this guitar would include the following:

If any of these describe your situation, I think the Redlands acoustic will serve you well.

I'm glad I got to spend some time with this guitar. I thoroughly enjoyed the testing process and was just happy to play it. It's especially relaxing to grab in the evening and do some fingerpicking in my living room. The more I use these smaller acoustics, the more I like them.

As always, take this review with a grain of salt. It's based on my experience, yet I'm trying to paint a picture of who this guitar might be ideal for.

But only you can make that call.

If you have questions about the our Traveler Guitar Redlands review, drop them in the comments section below.

We also want to be transparent about our review process. Feel free to pick my brain on that as well.