For the best balance of tone quality, features, and price, I'd recommend going with the AC15C1, which gets you the classic VOX tone with two channels in and around the $800 mark.

VOX amplifiers give us a more of a vintage tone profile, almost like a Marshall, but with a little more brightness and a little less edge. They're not aggressive by any stretch, and typically aren't know for heavy gain or distortion.

But, if you're looking for that brightness and vintage sound, you may have settled on a VOX amp as your best option.

This article is about helping you figure out which one of the bunch is going to be most ideal for you.

Because even when you settle on a brand, there tends to be a lot of additional options to consider.

In this article, we'll help you sort through the best VOX amps for your situation.

How we chose which VOX amps to recommend

Our recommendations are based on personal experience and actually playing testing/these amplifiers.

We're also focusing on a handful of features that are important when buying guitar amps, namely the following:

Which features matter most?

We'll use our experience and these features to figure out which amplifiers within the VOX brand provide the best overall value.

We support ourselves by partnering with great companies like Sweetwater when we review and/or recommend products. This costs you nothing extra and helps us avoid putting ads on our sites, specifically on the pages where we recommend these products.

These are the four best VOX amps we've selected, based on our own experience and the experience of other guitar players we keep in touch with. Note that if a rating is omitted that simply means we haven't done a full single review of that particular amplifier.

Table of Contents (click to jump)
Best VOX Amps
VOX Amp Tone Characteristics
Loud enough to gig?
What Features to Look For
Which styles do they work with?
Cost and Value
Your Questions 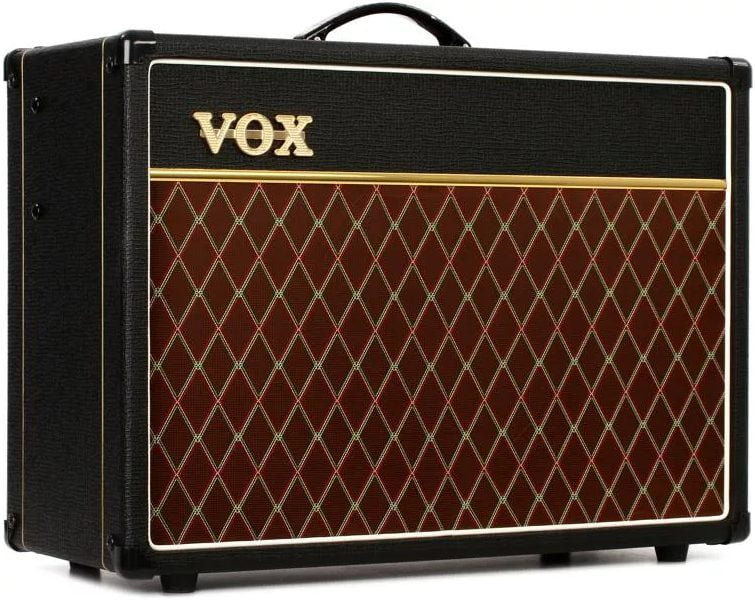 The VOX AC15C1 is a 15 watt tube-powered combo amp with a bright and crisp tone profile, along with two channels for a decent amount of flexibility. The two channels are listed as Normal and Top Boost, though the normal channel only allows you to change volume.

Here's what the control panel looks like with both the preamp and power amp:

You can also tweak reverb and tremolo effects, along with a master volume and tone control.

However, it's still one of the more limited dual-channel amplifiers we've reviewed, where we'd like to see some additional control, and perhaps a mids knob. Though it's worth mentioning that the overall tone of the amp is quite good, especially if you often play through a clean signal.

It's brighter and brisk, which is part of the appeal of VOX amps, so if that's the sound you're looking for and you don't plan to do a lot of EQ tweaking, the AC15C1 is probably your best-value option of the entire VOX roster. 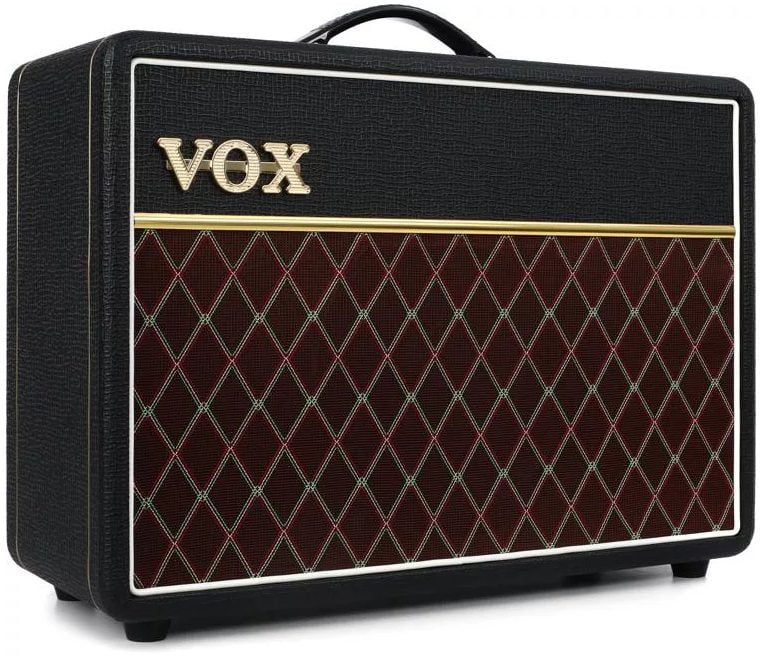 This amp drops you down to one channel with a two-band EQ, which is again a very limited control scheme.

Here's a look at the top panel:

Controls for the VOX AC10C1 are fairly limited.

You have gain to control your preamp volume, which is nice. But then just the two-band EQ before you get to the power amp controls of master volume and reverb.

If you're a fan of simple amps with set-it-and-forget-it potential, the AC10C1 could be a great fit for you, particularly if you use pedals to implement more control over your sound.

But if you're after flexibility and versatility, the AC10C1 is probably too limiting.

You'll need to mic this amp if you want to run the sound elsewhere, though the same is true of the AC15C1.

IDEAL FOR: Simple setups that rely on guitar pedals and effects. Again, clean tone fans will like it. 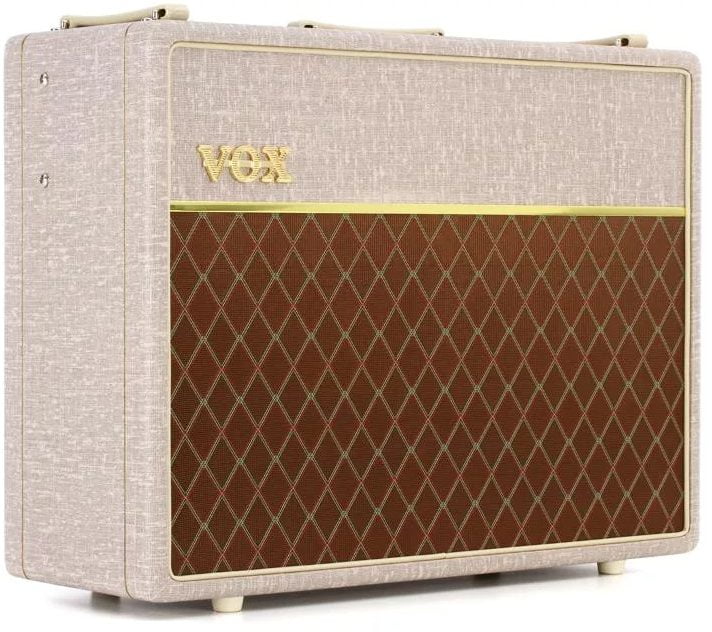 The HW in the name stands for hand-wired, which makes the AC30HW one of the nicest VOX tube amps you can get.

Controls are similar to the rest of the AC series with a top boost and normal channel with a bright switch.

These are a little warmer and more versatile though, taking on the persona of a more traditionally vintage tube amp. We also like that you can cut the power in half which is a distinctly modern feature in an otherwise vintage design.

Being hand-wired, the amp is expensive, but if you want VOX quality, this has to be one of your top picks. 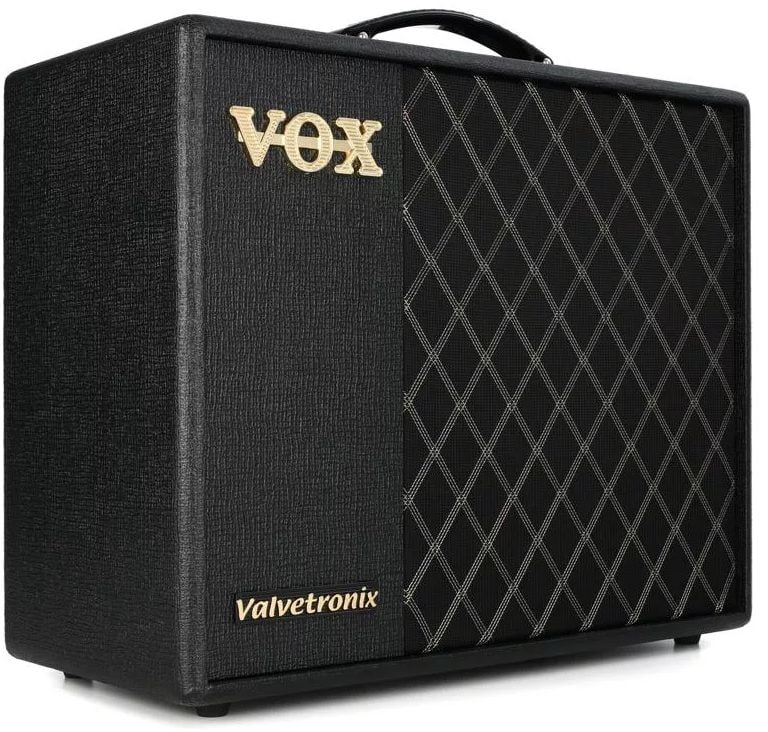 Valvetronix is the VOX answer to the modeling amp craze, and their version of the Fender Mustang and Marshall CODE series.

Here's a quick look at the top control panel:

The top panel for the VOX Valvetronix modeling amp.

I'm more comfortable recommending the VOX Valvetronix series as a beginner amplifier, just because modeling isn't the first thing you think of when you hear the VOX brand name. But the VT40x is a solid amplifier that can deliver some of the VOX vibe with models of popular VOX amps, and the flexibility that some people might miss from those nicer models.

If you aren't dying on the tube power hill, the VT40x is a good, low-cost compromise that'll save you money and get you a more versatile control scheme.

Think beginner and/or someone just looking for an amp for bedroom jamming or living room practice.

Closeup of some of the amp models on the VT40x. Flickr Commons image via PAH

As we've seen with some of these examples, VOX amplifiers are generally characterized by the following tone qualities:

If that's the type of tone you're looking for, VOX is going to be a great fit for you and you'll be pretty happy with the resulting sound. This will - of course - also depend on the type of guitar and perhaps the effects pedals you have set up.

One common question about VOX amps is this:

Are they loud enough for gigging?

Since they usually don't come with a line out, I'll assume they'll be mic'd or simply on a smaller stage, in which case they're usually going to be plenty loud for gigging. But here's some additional context for three of the amps we've covered.

The VOX AC15 is a 15 watt tube amplifier that's loud enough for small gigs, or perhaps medium-sized venues if you have a robust mic'ing setup and a PA system.

With the AC10, you have 10 watts of power which is fine for small gigs and venues that are limited in size. Think bars, restaurants, or smaller churches.

The VT40 is a solid state amp that - unfortunately - does not have a direct or line out. However, it is a 40 watt amplifier, giving you some added power and volume. We don't like the VT40 for medium-sized or large venues, but gigging in small spaces is doable.

What Features to Look For

The features we pay the most attention to in amplifiers (in general) is the number of channels, the control scheme, and the source of power at both the preamp and power amp level.

These same features apply to VOX amps as well.

Which styles do they work with?

Which styles are VOX amps best suited for?

Generally speaking, we like VOX for the following styles/genres/scenarios:

We don't like VOX amps for heavier styles or music that uses a lot of distortion. In our experience using VOX amps, that's just not where they're most comfortable. But anytime you're going to be playing a lot of clean tones, the VOX amp can potentially be a good fit.

Perhaps because of their longstanding reputation and iconic appeal, VOX amps can tend to be somewhat over-priced. We don't mind that in some situations, but it just depends on what you value as a guitar player and consumer and whether or not that's worth it to you.

Do you care about the vintage appeal of the VOX brand?

Are you set on bright and clean tones that are driven by raw tube power?

If that's the case, you might be well served by VOX amplifiers, even with the unyielding price tags.

However, fans of modern distortion who don't care for vintage-style amps aren't going to be as happy, even if they get a deal on something like the AC15. It just isn't going to fit their style.

So if you're trying to determine value, think about how well the VOX amps fit into your list of must-haves and your musical preferences.

If it's a good fit, the extra expense might be worth it.

Do you have questions about our roundup of best VOX amps?

Maybe you disagree with our picks?

If so, it's fair game in the comments section. Drop us a line there and we'll chat about it.