The EarthQuaker Devices Brain Dead Ghost Echo is a boutique, digital ambient echo/reverb pedal. It's a re-release of the original Ghost Echo pedal with the same improvements as the Ghost Echo V3 including upgraded op-amps, stronger reverb signals, and a re-calibrated dwell control. With a better overall tone performance and improved control, this pedal is a great fit for those wanting an echo pedal with a simple interface and a slapback lean.

EarthQuaker Devices has consistently produced really solid digital effects pedals. This time around they teamed up with creative collective Brain Dead to build a pedal that is both spooky and spacey, with an ambient style that leans vintage, and some new casing artwork.

This collaboration is a special edition of the V3 pedal of the same name, providing a crisp spring reverb and slapback-style delay with vintage artwork to match.

Brain Dead Collective was responsible for the art of both the pedal and the box.

The attack knob allows the user to manipulate the pre-delay setting. This determines the time before the reverb effect is introduced, counting between a range between 30 and 150 milliseconds.

The dwell knob sets the length of the decay. Self-oscillation reaches its peak when the dwell knob is maxed out.

The depth knob adjusts the dry and wet balance of the reverb effect, acting similar to a mix knob.

Setting the three knobs to 12 o’clock is a great way to become familiar with the pedal’s controls when experimenting with the overall sound you want to achieve. Start there and adjust as you go.

This review was put together based on first-hand experience and testing the Ghost Echo Brain Dead pedal. Note that we use partner links to Sweetwater and other manufactures, which means if you buy something through those links we might earn a commission at no extra cost to you. Thank you for supporting us.

Compare to Other EarthQuaker Devices Pedals

EarthQuaker Devices actually has several delay and reverb pedals we like, so we've set them up in this table for easy comparison. You can also add more pedals to the compare bar via the button below the table.

Use this button to launch a search sidebar that will let you add more pedals to the compare bar that are not listed on this page.

The Ghost Echo is an echo/reverb pedal with a slapback-focused tone and a vintage tape echo lean.

The price of this special edition Ghost Echo Reverb Pedal is listed below. Different listings from other vendors including Amazon can be found below. In addition, we have included lowest price points and previous price listings, allowing you to compare while shopping to ensure that you are getting the best deal.

Tone Quality of the Ghost Echo

The Ghost Echo creates a mellow ambience, reminiscent of reverb effects used by Led Zeppelin’s Jimmy Page on songs like “What Is and What Should Never Be” and “Dazed and Confused.”

The tones of this pedal lean heavily in the direction of slapback delays, hall-type reverberation, and short-room ambience. On most settings it gives off a very lush tone, it's much less rigid and rhythmic compared to many of the echo and delay pedals we've tested.

As a mix between delay and reverb, this pedal blends the two effects in a unique way.

It would be cool to see some separate controls for each effect, perhaps even a bypass switch for each one and then a mix between the two. Maybe a larger-form version of this pedal could be in the works.

Here's our own tone demo:

With no added control to the front panel, this new edition Ghost Echo V3 makes it easy to adjust your instrument’s sound. The three knobs add a decent amount of flexibility to your mix, given the simplicity of the configuration.

At the same time a strength can also be a weakness. I would have loved to see at least one or two additional tweaking options, given this is a follow-up version to an existing pedal with the same controls.

Again, these are all things we could potentially see in follow-up revisions.

The attack, dwell, and depth controls all dovetail pretty well with each other. For only three knobs, there's a lot of ambient variety to be explored (see some of our tweaks in the demo video).

The dwell knob speaks more to self-oscillation with this setting kicking in at about three o’clock. You are essentially controlling the length of the decay with the dwell knob. Adjust the knob depending on how long you want the echo to last. When the pedal begins to self-oscillate at three o’clock, you can then control the pitch of the oscillations with the attack knob.

Beginning with the attack knob at 12 o’clock is a good idea when experimenting with the different pitches in self-oscillation mode.

The depth knob controls the wet/dry signal mix (strange that they named it depth) allowing you to determine just how much of the reverb effect is present. You will find that turning this knob past 12 o’clock gives you a huge boost to the reverb tone. 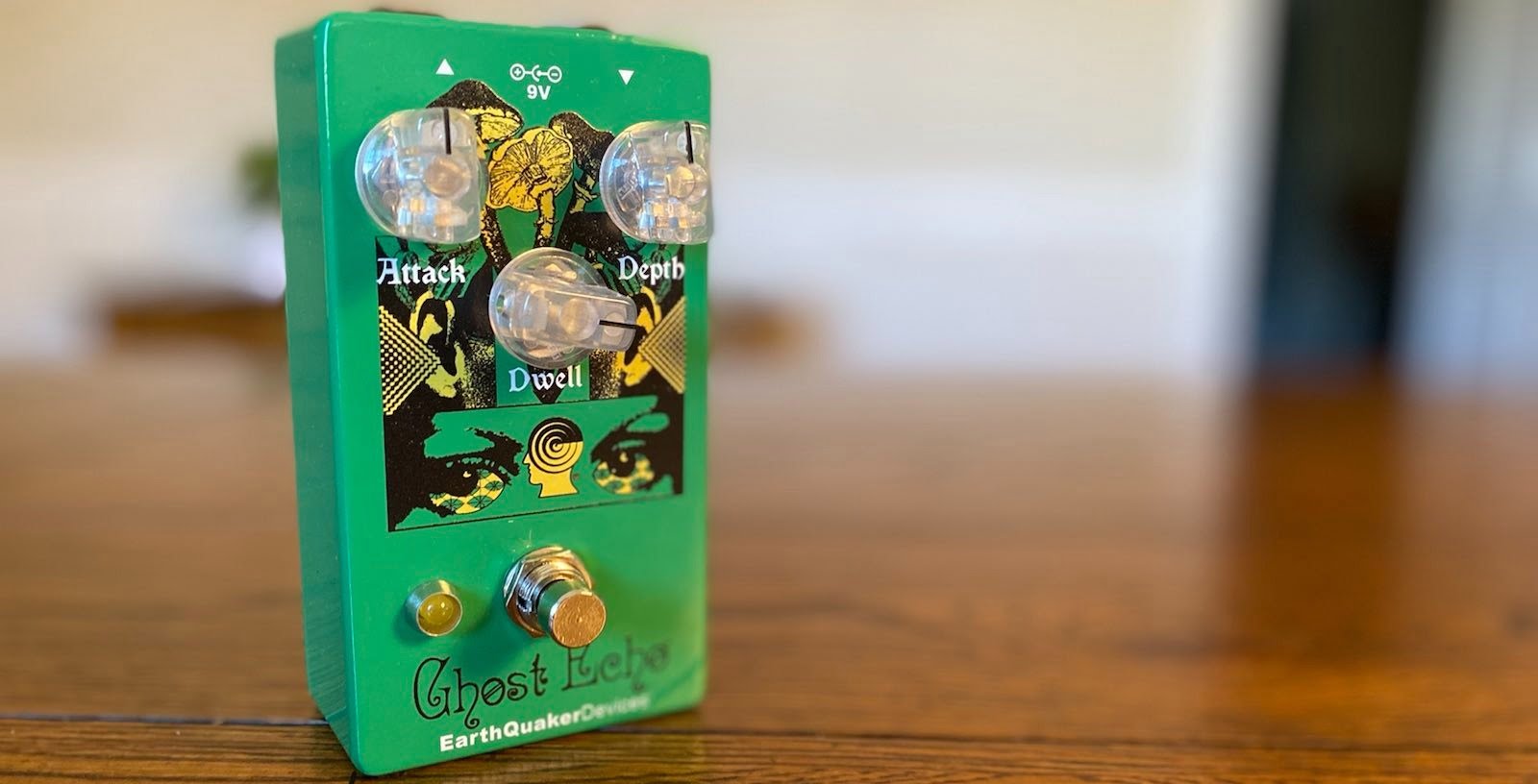 While limited, the three controls actually provide a lot of flexibility. It's a unique sound that we haven't typically heard in other reverb/delay combo pedals.

This new edition Ghost Echo has a green body with yellow and black drawings on its front panel.

The scripted "Ghost Echo" title font beneath the bypass switch is a nice touch.

EarthQuaker was founded by Jamie Stillman, former indie label exec and current rocker for the bands Relaxer and Fringe Candidate.

His approach as founder and owner of the label Donut Friends has been carried over to EarthQuaker Devices which was founded in 2008. His DIY approach is what helps the company offer great products that are handmade in the United States.

These pedals are created by a passionate music lover and it’s this passion for the arts that gives us unique products with every new edition and model. Based in Akron, Ohio, EarthQuaker employs people locally and also recycles any remnants of their manufacturing process.

They're a great company to support.

Price and Value of the Ghost Echo

Released nearly five years after its predecessor, this special edition Ghost Echo is listed at the same price as the original Ghost Echo V3.

Although it's equipped with the same effects and functionalities as the V3, it's the co-branding element brought on by Brain Dead that adds some extra value to this product.

When comparing price to other echo pedals on the market, the just below-$200 price tag is reasonable, if not expected. It's not a deal, but they're not running up the cost either.

Remember to check our pricing resources above in case the retail number has changed since the publishing date of this review.

This pedal is for the guitarist that is looking to add some simple and unique ambience to their pedalboard.

For anyone operating in the rock, punk, or indie subgenres, the Ghost Echo can provide a surf rock atmospheric sound or even a death tone as heard in more of the hard rock genres. The Ghost Echo V3 can also be used to enhance synthesizer sounds.

In full self-oscillation mode this pedal can take your synthesizer to another level, adding looming futuristic tones reminiscent of music from the progressive rock era.

The sound of the Ghost Echo V3 - that has won over so many artists since its release - and the spooky artwork created by Brain Dead collective, makes for a solid pedal that's able to expand the ambient flexibility of any pedalboard.

I recommend it confidently for for rhythm tracking, ethereal filles over a clean tone, and melodic riffs.

If you have any questions or input about this special edition Ghost Echo V3 Pedal, feel free to leave a note in the comment section below.