Yousician can be a lot of fun, but Justinguitar is completely free, and - in my opinion - a far better educational program. If you're after comprehensive courses and a more focused approach, Justinguitar is easily the better choice here, regardless of skill level.

Justinguitar and Yousician employ two different teaching methods in their guitar programs. Here's how I'd describe both:

Where Justin Sandercoe (Justinguitar's creator) uses a more traditional lesson method and approach, Yousician goes without human instructors, relying instead on their application that listens and analyzes your guitar playing on the fly.

Both programs are good in their respective contexts, but how do they compare to one another?

On this page, we've put the two programs side-by-side after sending them both through our grading system.

Here's how they compare.

Note that we partner with Guitar Tricks and JamPlay, though our rating of them is still objective and sincere. If you buy a membership through one of our links that can help support our site at no extra cost to you.

Which one is the better option for you? Yousician or Justinguitar?

Below, we plot the value of popular programs by crossing the ratings we've given each one with their monthly cost. Justinguitar is omitted from this chart because it is totally free. 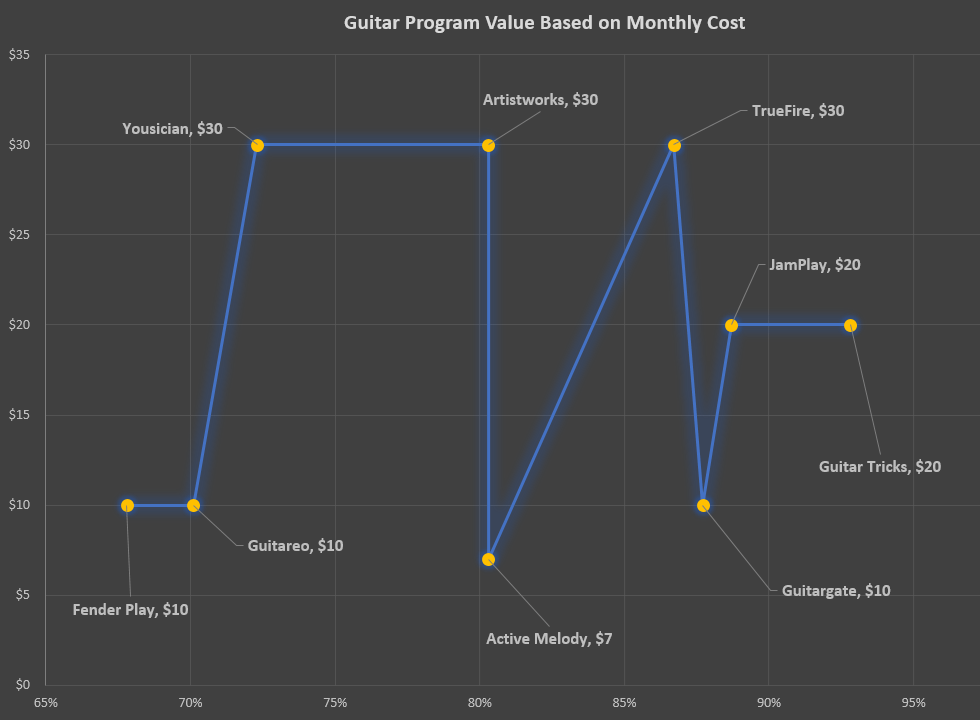 Guitar lesson value chart. Lower and further to the right is better.

This is the main grading table we're using for our Yousician VS Justinguitar comparison. Note that Justinguitar has a significant advantage in the value department because it's totally free. Videos are hosted on YouTube and you don't even need an email address to sign up (unless you want to use progress tracking).

While Yousician lessons rate well, they aren't presented with an actual instructor and are often poorly organized, making them less effective in the bigger picture.

You could also make the argument that Justinguitar should rate higher than Yousician in the beginner lesson category.

Not surprisingly, Justinguitar does far better with supplemental material, song lessons, and all rating categories related to organization. It's just a much more effective and thoughtful arrangement of material.

Yousician does a lot better in the design department, but otherwise there isn't much to draw us to Yousician above Justinguitar, unless you're looking for something a lot more challenging. Even then, Yousician wouldn't be our first choice, it's just a little better than Sandercoe's content for more advanced players.

Justinguitar caters primarily to beginners, so the value of their lessons starts to trail off once you get into the more intermediate content.

As I mentioned earlier, there's also the caveat that Justinguitar is completely free.

In this section we've added some broad grades for Justinguitar and Yousician, which is separate from our grading system above. These are just meant to give you a general idea of how the two programs perform in relation to one another.

As expected, Justinguitar is better when it comes to educational and topical order/organization.

It's also a far better value, given the $0 per month price tag.

Part of Justinguitar's advantage here is having an actual teacher as opposed to a nameless, faceless application. It's hard to learn from something that doesn't actually talk to you and instead relies on analyzing mostly what you're already doing.

Between the two programs, Justinguitar is both free to use and a far better option, especially for beginners. We'd view Yousician as more of a high-end practice aid, and not a full learning program on its own. Justinguitar's educational value is also found largely in how well Sandercoe has ordered and arranged his content, despite his website already being fully published on YouTube.

A program like Yousician, with weaker organization and no talking head, doesn't really stand a chance against a program like Justinguitar.

Anybody who tries to tell you that Yousician is better simply because it's paid, isn't being honest with you.