Note that we've seen a lot of these amps don't necessarily allow you to use both inputs simultaneously. We've found that it's a case-by-case basis, depending on your amp. Solid state amps with channel selectors seem to be friendlier to this. Thanks to DefJef in the comments for raising this issue.

Most guitar amps have one input. This page is a collection of guitar amps that come with two inputs, which effectively allow you to have two instruments or two "lines in" to the preamp. There are actually a handful of reasons why this type of setup might be beneficial to you:

This list has been built based entirely on that feature. As a result, it includes combo amps, heads, rackmount preamps, and rackmount power amps. The only pre-requisite is that they have two inputs. 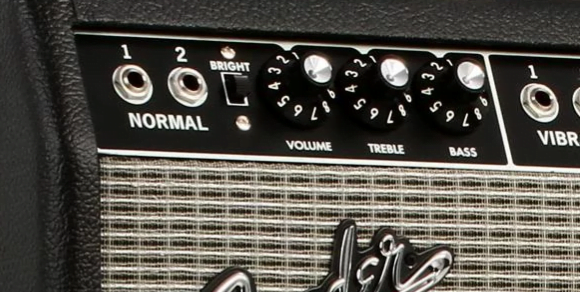 We've also focused on brands with good reputations that we know and trust. And while it's not a "best of" list, it is meant to provide a reliable selection to choose from based on the experience of myself and other musicians I work with.

If you have additions or suggestions, feel free to let us know via the comments section at the bottom of this page. After the table, we'll provide some additional information and resources about dual amplifier inputs.

Table of Contents (click to jump)
Our List of Guitar Amps with Dual Inputs (Combos and Amp Heads)
About 1/4" and TS Inputs
Different Types of Dual Amp Inputs
High and Low
Normal and Bright
How can I use both inputs?
For active pickups
For easily switching guitars
For multiple pedalboards or signal chains
Additional Gear that Might be Needed
Does it add to the cost?
More Common in Tube Amps
Other Factors to Consider
How many channels?
How many and what type of outputs?
Conclusion
Missed an amp?
Related Articles

A quarter inch cable is how an instrument or guitar cable is sometimes described because of the size of the connection (roughly 0.25 inches). It can also refer to either TS or TRS cables. What's the difference between TS and TRS?

You might also notice some odd labeling next to the amplifier's inputs. Here are a couple we've run into.

While the meaning of a high and low inputs can sometimes shift between brands, this generally refers to inputs for high and low gain sources.

For example, humbuckers that are more aggressive - with higher output - might put out more gain, in which case you'd plug them into the "low" input jack. This might provide something like a -12 db cut in your signal to give you some headroom for the louder pickup. However, the difference between the two doesn't necessarily preclude a certain type of guitar or pickup.

Perhaps a more familiar (and less technical) pairing would be the normal and bright inputs, which in some cases will replace the bright switch like you sometimes see on Fender amps.

Conventionally, the bright input produces a more crisp or louder tone compared to the "normal" input which has no adjustment made before the preamp. Technically, this could still be described as a difference in gain. The wording is just more intuitive and descriptive. This Fender article covers it a little more in-depth for those interested.

How can I use both inputs?

As I mentioned earlier, there are several ways that you can use two inputs on your amp. Primarily, they include the following:

The most common reason to have more than one input in a guitar amp is to accommodate different levels of gain or to "dampen" active pickups. Since active pickups are typically louder than passive pickups, an amp with a second input will often cut gain automatically, going 10 to 15 decibels lower, thus giving you some headroom to avoid unwanted clipping from a hotter pickup.

It's not necessarily a best practice to plug two instruments at a time into the same amp, even with dual outputs. However, it is technically possible, depending on the amp, and people do this in certain situation. For example, rather than have to switch guitars during a gig, performers might plug one into each input and then just mute the one they're not using until they switch.

For multiple pedalboards or signal chains

Some players, particularly when performing live, might want to take advantage of the gain differences in the two inputs given different signal chains. For example, a pedal chain with a distortion might be better served going into the input for an active pickup (the lower input) while the other chain goes to the normal input.

Again, the difference between the two inputs is subtle, but the idea is to give yourself some extra headroom so you can have more gain without having unwanted distortion or too much volume. For pedals this is less of an issue since you can usually turn volume and gain down. However, for something like a high output pickup - that you can't turn down - the distinction becomes far more crucial.

You'll need extra instrument cables (TS or TRS cables). Otherwise, it could be helpful to add a signal splitter or A/B/Y switch.

Does it add to the cost?

These amps don't typically cost more because of the inputs themselves, since so many other factors play into the cost of a guitar amp. However, it is important to recognize that the types of amplifiers that usually include a dual input setup are naturally more expensive because they're considered higher-end, more professional-grade amps.

In other words: Does the second input itself add to the cost? No.

But, amps with that type of functionality are typically more expensive because of the type of guitar player they're built for.

We've also noticed that dual inputs are more common in tube amps than solid state. This is particularly true with Fender tube amps, and Marshall amps, albeit to a lesser degree.

Other Factors to Consider

As I mentioned, the number of inputs is a fairly small consideration when it comes to the functionality of an amp. Here are a couple more features to keep an eye on as you shop:

Having multiple channels is one of my primary concerns when looking at guitar amps. You should have at least two, while three or four is preferable. Multiple channels, regardless of how many inputs you have, allow you to switch between different volume, gain, and EQ levels without moving the knobs manually.

How many and what type of outputs?

You should also look at outputs, especially if you're getting an amp head. Generally speaking, you'll have some mix of the following outputs:

Some of the outputs on the back of a Bugera Infinium amp head.

Most of these will be on the back of your amplifier. Make sure to do a thorough rundown of all the outputs so you know what you'll be able to hook your amp up to. This is less critical with combo amps (since they include a speaker) but still something to keep an eye on.

Here are some other resources we've written on guitar amps and amp outputs:

That should cover most buying concerns related to this feature. Again, the amp itself is likely to be higher-end, so make sure that you're basing your decision on other quality factors outside of just the dual inputs. Otherwise, it's wide open with plenty of brands, models, and styles to choose from. I listed the best and most recognizable options I could find, but I certainly haven't covered everything.

That said, if you know of a particular amp with dual inputs that I didn't list here, let me know in the comments section below and I'll consider adding it. Technical questions or other thoughts about the amps listed are welcome there as well.