While we make every effort to keep these posts up-to-date and current, note that availability of these guitars and pricing can change quickly, depending on a number of factors. If you have questions, refer to the comments section below.

In terms of value and quality, the Fender Player Stratocaster is hard to beat. It's their mid-level options, though much nicer than the budget-focused Squier models, capable of full-time and pro-level guitar duties. In this price range, it's going to be the best fit for the widest range of players.

We're highlighting four Fender Stratocasters that have one primary feature in common: They all retail for less than $1000. If that's what you're looking for, this list is perfect for you, as it covers your budget and recommends the best Fender Strats within that price range. We're also considering a more broad list of quality indicators, including pickups, hardware, playability, and more.

We've chosen four models of Fender Stratocasters, all with their own unique appeal and quality markers. Keep in mind: They're similar guitars in a similar price range, so the distinctions we can make between them are limited. At the same time, we'll do our best to contextualize each recommendation so you can figure out which one will be most ideal for your situation.

The Deluxe HSS is a heavier Stratocaster that can bridge the gap between rhythm and lead, and push some thicker tones and chord progressions. For those that like the brighter Strat style, but want the capability of pushing higher gains and more rhythmic tones, the Deluxe HSS will give you a good balance of lead and rhythm.

The Player is the consummate mid-range Stratocaster, particularly built for lead and blues, though versatile and applicable to a wide range of musical styles. For the price range, it's one of the best-value guitars on the market, and certainly our top pick within this price range.

At its price, you could even do a pickup upgrade and have some room to spare.

The Diamond version of the 75th anniversary Strat has a spec sheet that's similar to the Player Stratocaster, and sits at a similar price point. Though it's not in production outside of a Custom Shop model - which is far more expensive - it's one of the Stratocasters we've liked most in this price range. You can still find used options floating around.

We obviously put our salary cap at $1000, though we didn't select any Fender Stratocasters that were under $700 either. Part of that is because Strats rarely retail under that number, unless you start getting into the used or Squier Strat market.

Other than this price range, we drew on our experience, community consensus, and well-known electric guitar quality indicators to make our selection.

This excluded some well-known Strat models and series.

For example, we didn't consider any Squiers or Fender American Series Stratocasters, since the Squiers are too cheap and the American Strats are too expensive. If you want, you can compare a bunch of Fender Stratocaster models here without regards to pricing.

Here are a couple additional features to keep in mind (aside from price), when shopping for a Fender Stratocaster.

First, check to see what kind of pickups are on your Stratocaster. In this price range, we like to see the Fender Noiseless Strat pickups, pictured below, or some kind of branded Fender pickup from the Custom Shop: 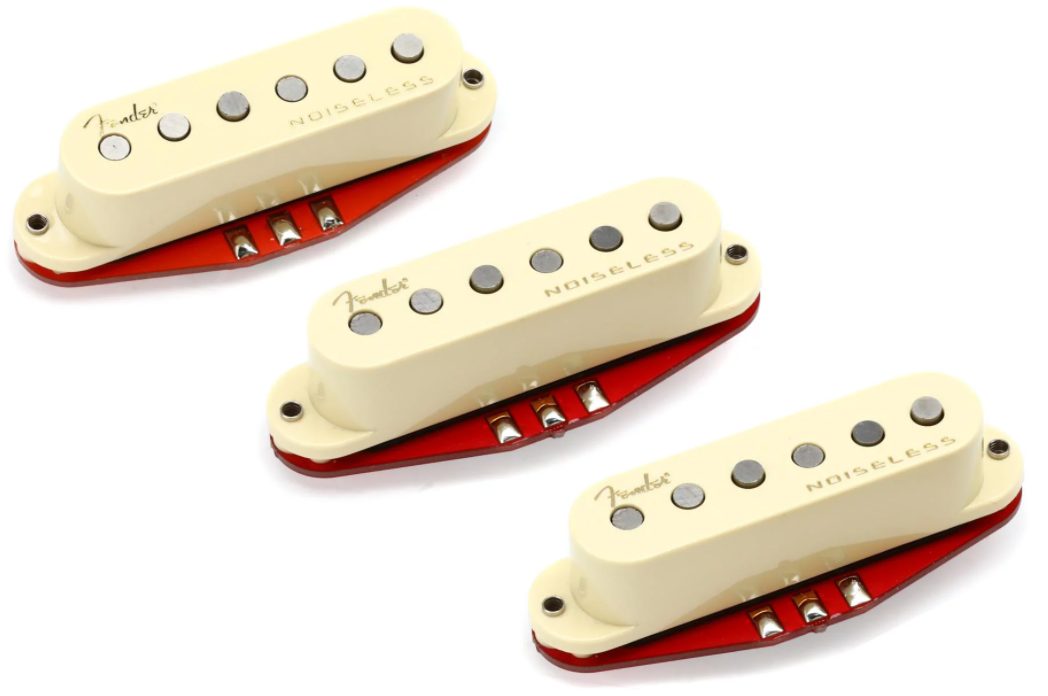 The Fender Noiseless Strat pickups are a great feature to keep an eye out for.

Otherwise you're looking at a kind of stock Alnico 5 single coil pickup, which is much cheaper and not as nice as the Noiseless series. That doesn't mean the guitar is terrible, but we really like to see that "NOISELESS" insignia in our Strat and Tele pickups, whenever possible.

In our list, the Player series and 75th anniversary diamond Strats don't have the Noiseless pickups added.

You can always add them later if you have the energy for a Stratocaster pickup upgrade.

If you've narrowed down your choices to a Stratocaster, get familiar with the series and models within the Fender Strat lineup.

Pricing is tiered through these series, and quality tends to shift dramatically from one to the next. For example, the American Professional Stratocasters are way nicer than the Player Series Strats, but also more expensive.

You've got to pay attention to where you are in those tiers, especially if you're buying a used Strat that may (or may not) be a great deal.

What You Should Get in our Price Range

This leads us to some standards in terms of what we should get for what we're paying, between $700 and $1000. We'd say you should at least have the following three things in exchange for that investment.

If you don't get the Noiseless pickups and get stuck with the stock Alnico 5 stock versions, we might recommend changing those out at some point. But try and hold out for a Strat that has the Fender-brand pickups, whether they're the Noiseless version or something similar.

In our price range you should be expecting to get one of these mid to upper-tier Strat models, either in the Player or Deluxe series. Every once in a while we see a low-end American Strat come down under $1000, but that's usually just in used markets.

Generally speaking, these Stratocasters should be more reliable and trustworthy than cheaper Strats. They should last longer, sound better, and have less noise issues than the cheaper Squier Strats and knockoff versions.

The best Fender Stratocasters under 1000 dollars can be narrowed down to two series:

We threw in the 75th anniversary model because it's built with similar specs, but you're really just working in the Player and Deluxe series realm.

If you're trying to stay within the $700 to $1000 price range, it's advisable to go with our of those two series and a model therein.

Hopefully our four picks help you get some ideas and narrow down your search.

Do you have questions about our four Stratocaster recommendations? If so, feel free to drop it in the comments section below and we'll do our best to help out.