We're looking at guitar pedals Slash uses in his live rig, including wah, distortion, modulation, and delay. Most of these effects are kept in a rack-mounted drawer system, whether in the studio or on tour.

Slash handles the wah pedal himself.

For those interested in amplifiers, checkout our writeup on the amps Slash often uses.

First, we should note that Slash's pedalboard has changed over the years, which we can compare from two different sources.

All about the guitar pedals that Slash uses. Flickr Commons image via MattArena88

Coming out of the Guns 'n Roses and Velvet Revolver era, we have a pretty thorough documentation of Slash's guitar rig up to that point, including all the pedals he used at that time.

Here's a diagram of the pedalboard:

Links are to Sweetwater and Reverb, both of whom we partner with. Please keep in mind, shopping via this links does not cost you anything extra, but does help support Guitar Chalk Media.

Slash still tours with Guns 'n Roses, though his pedalboard and overall rig setup have changed over time and adapted to new technology. First, all pedals - aside from his signature wah - are in a rack-mounted unit. Four of those pedals are in an effects loop, while the rest are in their own loops and hooked up to a switch.

You'll recognize a few things from the 2011 board - namely the prioritizing of MXR effects - but it looks quite different.

Slash uses two Boss DD-500 digital delays that are both placed in their own effects loop and controlled by a MIDI floorboard.

Above the two delay pedals you have two MXR Boost/Line Driver pedals, which are also in an effects loop and set to the exact same dB boost.

The MXR Boost/Line Driver pedals are also in an effects loop in Slash's rig.

On a second rack tray, Slash uses a handful of pedals that are engaged only for particular songs. Again, it's a lot of MXR and Boss, with the DD-3 and Signature Octave Fuzz from the old pedalboard, along with a noise gate, and MXR EQ, overdrive, and analog chorus. 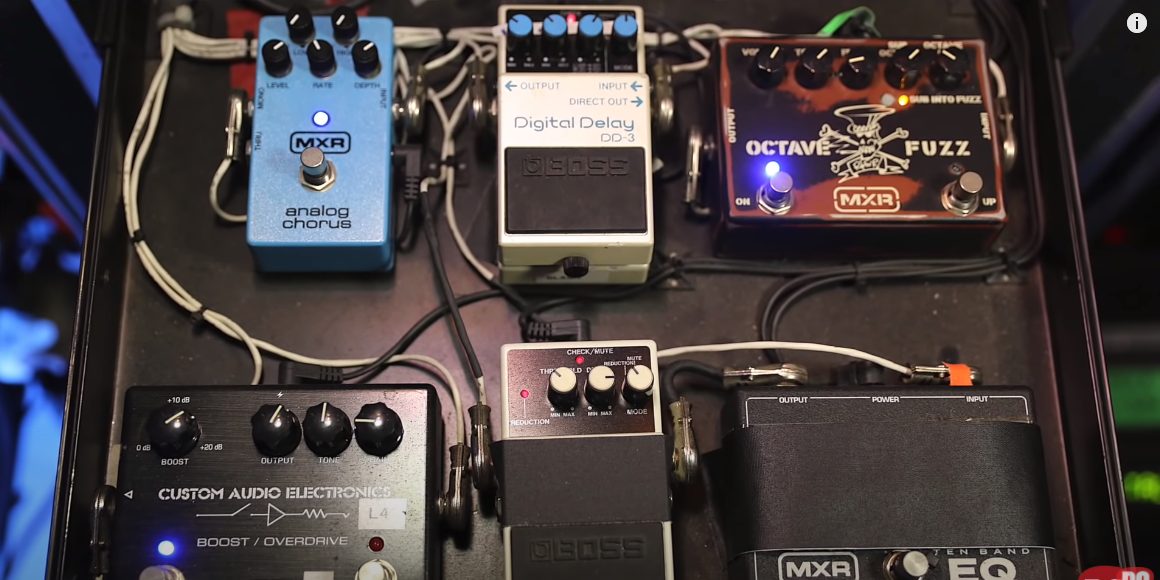 The miscellaneous layer of Slash's pedalboard, with a couple boxes from the old rig.

Here's each pedal from the above screenshot listed:

Keep in mind, the order of effects isn't going to be determined by where the pedals are placed in relation to one another, because they're all connected to a switch. With a guitar pedal switch, each pedal gets their own loop and can be cutoff with true bypass on a separate control.

Diagram of a switch that creates loops for individual guitar pedals.

While I'm not sure what switch Slash is using, I know for a fact that this is how the pedals in that tray are set up. This means that each pedal is always "on" while the switch can either engage or disengage the loop.

This ensures that each loop - when not engaged - will provide a true bypass signal and also adds centralized control for all the pedals in the tray.

Again, this does not include the wah pedal I mentioned earlier.

A wah pedal doesn't do you a lot of good when it's stored away in an effects rack.

Instead, Slash keeps his wah pedal on stage with him, where he can easily access it. We believe this is almost always the SW95 Slash Signature Cry Baby, which we saw in the diagram from 2011.

Pictured here, it's easy to spot in the candy apple red coloring and the Slash logo on the foot pad: 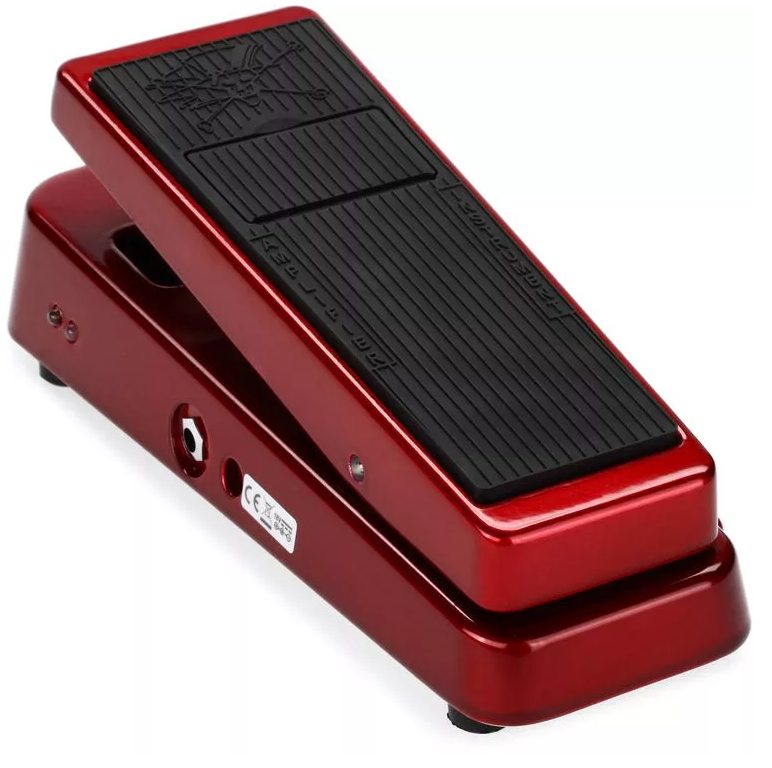 To the best of my knowledge, Slash always uses this wah pedal, both on stage and in the studio.

As you might have noticed, Slash gravitates towards MXR pedals, which is actually a subsidiary of Jim Dunlop. There's some sponsorship involved here, but we've seen Slash consistently use MXR pedals, even dating back to the 2000s.

For example, here's an older photo of Slash's board, closer to the 2011 period. 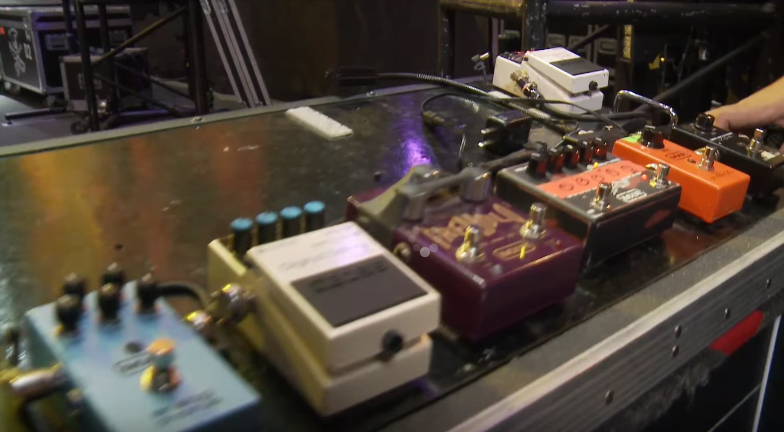 An earlier version of the Slash pedalboard.

You can see the MXR Phase 90 and a Boss tuner pedal, in addition to many of the stompboxes we've already highlighted.

Along with MXR, Slash also uses a lot of Boss pedals, namely the delay, noise gate, and tuner in the above photo. And while it's true that pedals go in and out of Slash's rig with regularity, he has always been consistent about his loyalty to the Boss and MXR brands.

If you're looking for the brands-only answer, those two account for 99 percent of what Slash uses and has used for years.

I have a hard time trusting information online about effects used for particular songs. Unless you see it on stage, or Slash's guitar tech confirms it, I think it's mostly conjecture and speculation.

But in the video I referenced earlier - the Premier Guitar Rundown - Slash's guitar tech cites the following two pedals as being used in particular songs:

He also mentions that Slash uses the wah and overdrive pedals a lot, likely on a wide range of songs.

What about a distortion pedal?

Most professional guitar players - Slash included - do not use distortion pedals the way we would use a distortion pedal in a home rig. Instead, they get distortion from their amplifier's dirty channel.

This is almost always a better distortion source since it happens directly at the preamp level instead of before it.

It's especially beneficial if you have nice amplifiers like most of the pros do.

In Slash's case, he gets his distortion from one of several Marshall amplifiers, likely  his JCM 800 signature model.

Slash does use overdrive and boost pedals, but those are more for controlling volume levels and dynamics, as opposed to simply laying distortion over a clean signal.

These are all pedals that Slash has regularly used over the past couple of decades. Again, it's important to stress that pros like Slash have a lot of gear going in and out of their rig, depending on who they're playing with or what they're playing.

However, we're confident this represents the bulk of Slash's pedals and covers the boxes he most commonly uses.

If you have questions about Slash's pedalboard, or about something specific we've mentioned in this piece, feel free to leave a note in the comments section below.

We'll jump in and help as best we can.