The Classic has everything I want to see in a Les Paul (Burstbucker pickups, Grover tuners, the fancy body carving), all for $500 less than the Standard. Given the relative similarities of the two models, I'd recommend taking the Classic and the built-in discount.

All of them are more expensive than the Les Paul Classic.

So for our Gibson Les Paul Classic VS Standard comparison, we'll be focusing on the Les Paul Standard '50s version, which is one of the most popular models. We'll also mention some features in the Standard '60s version, which differ slightly from the '50s model.

Just to recap, we have three "players" in this comparison: 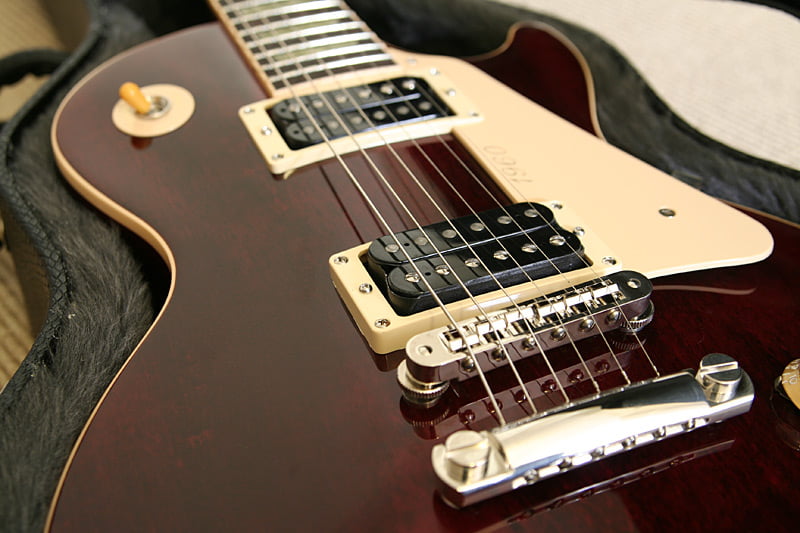 The Gibson Les Paul classic comes with uncovered pickups, which is one of the few features that give away its identity. Flickr Commons image via Soundingblue

Though I think prospective buyers will find little difference between these two guitars.

We can start with our comparison tool for a quick look at each model:

As you can probably tell, the differences between the two on the spec sheet are fairly minimal. At the same time, we have a $500 price difference tilting towards the '50s Standard.

So what exactly accounts for this price difference?

Why is the Les Paul Standard more expensive?

One might look at the 61R and 61T Burstbuckers in the Classic and suppose those pickups are cheaper. However, the 61R and 61T are in the '60s Standard as well, which is also $2500.

One of the only things we can surmise is that the Standard series gets more "by-hand" work than the Classic series. The product description specifically mentions hand-wired electronics for the '50s Standard, but not the classic.

Any time you have work done by hand on a guitar, it tends to significantly run up the price.

That's probably what we're seeing with the Les Paul Standard being more expensive than the Classic, because it's not an issue of pickups, tonewood, electronics, or a Plek'd fretboard, all of which are nearly mirroring each other in the two guitars.

With 9-hole weight relief, the Les Paul Classic is a bit lighter than the Standard, which might also account for some of the price difference.

The Classic, being cheaper, also throws in Grover brand tuners and the 61R and 61T Burstbuckers we mentioned earlier. For being cheaper than the Standard, it definitely seems to provide some higher-end features that makes us feel really good about saving the $500 and going with the Classic over the '50s Standard.

The '50s Standard ships with Gibson stock tuners (which are still quite good), and the Burstbucker 1 and 2 humbuckers instead of the 61R and 61T. It's not necessarily a downgrade, but disappointing considering the '60s version of the Les Paul Standard adds these back in while maintaining the $2500 price tag.

With these guitars, you're just not going to find a lot of distinction in the specs sheets, which is why we're fairly certain the price difference accounts for more care in production and hands-on work.

If you've narrowed your decision down to these two guitars, I'd strongly recommend going with the Les Paul Classic, since you get the Grover tuners, Burstbucker pickups and everything else that comes in the Standard models, yet for $500 cheaper.

When you're looking at guitars in this price range, differences in quality become very subtle and hard to pin-down.

That's when you can go with just the best value/price option, or even pick based on the color you like or which one you think looks better.

From a sound quality and feature perspective, there just isn't much difference.

Both are excellent guitars.

If you still have questions about these two guitars, feel free to drop those in the comments section down below. I'll jump in and help out as much as I can.

Written by GC Editorial on Electrics and Comparisons

Written by GC Editorial on Electrics and Comparisons